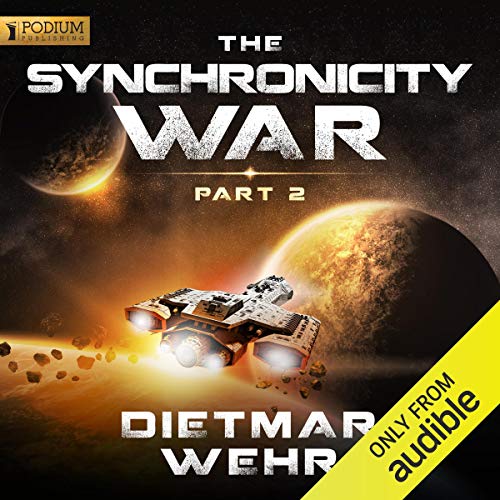 The unprovoked war with a mysterious alien race is going badly. Minor tactical victories are offset by major strategic setbacks. The aliens know where all Human-occupied worlds are while their own worlds are still unknown. Victor Shiloh's unpredictable precognitive visions are the only thing that is slowing the alien onslaught. Not content with gradually pushing Humanity back, Shiloh's vision reveals a massive attack on Earth that will have terrible consequences. So far his visions have all come true. Can his A.I. allies make the difference between extermination and survival for the Human Race?

The series has some fun and interesting moments, and a few interesting characters. Unfortunately, the characters seem to lose depth as the story progresses (or is jumped around somewhat incoherently).

In Part 2 of The Synchronicity War Saga, Earth, and its 11 billion human inhabitants squeezed onto its crowded shores is now the frontline in an increasingly nasty war of annihilation against a nameless, completely depersonalized enemy that Mr. Wehr hasn't taken the time to name yet, has refused to devote a single sentence of inter-alien dialogue or physically described in any way whatsoever. Is this an intentional strategy of negation where the aliens are totally devoid of any redemptive value, as single minded agents of obliteration? Hard to say.

Maybe Mr. Wehr is saving up all of the alien's dialogue for the next installment. Who knows, those bastards might turn out to be a bunch of chatty, disgustingly superficial blowhards who can't shut up unless their blown up.

Anyways, at least Mr. Wehr had the presence of mind to include in his cast of characters everyone's favorite SS Panzer Army commander- General Sepp Dietrich. In Part 2 Sepp takes on the role of Fleet Admiral and second in command to the Big Kahuna.

As for the main character CAG Shiloh, I dig his dedication to the AI fighter fleet led by the irrepressible Iceman. They think of him, Shiloh that is, as a kind of father figure, and he is as protective of them as any father would be towards his own children. If Shiloh hears anyone talk shit about AI's behind any of the AI's virtual backs, that individual's career is quickly 86'ed. I respect the AI's ability to quickly acquire handy stock fighter pilot lingo and their growing sense of wonderment at what Iceman termed "humanity's obsession with fecal matter and procreative activities".

I am super ready for Part 3. So many questions to answer. Can humanity bounce back after that little shit sneezed into the candy jar on the spaceship? Memo to those idiots in that spaceship's bio- med lab: What the flying fuck were you MENSAS thinking when one of you placed that ubiquitous glass jar of irresistible mint candies in a stand alone location just inside the wide open, unguarded bio-medical research lab located for reasons I cannot fathom right next to the living quarters for the bunch of refugees suspected of harboring a ultra-deadly strain of some pan-death flu virus? Step back and think about it. Here comes some snot nosed little runt waltzing out of his family's quarters and within six steps is inside an authorized personnel only bio-med research lab staring at the candy jar. I don't even think he had to twist the lid off. As he starts fishing for a candy he feels that itch in the back of his nose just as he reaches deeper into the jar, his face is right over the jar's mouth, and.......... Thus begins the mother of all pandemics with humanity circling the extinction drain in ever tighter circles. And not one person asked " Why is there a jar of candies in the middle of the restricted Bio-med lab?" Or, "Do we really want to work right next to these potential vectors?" Or, "Isn't Ensign (insert last name here) supposed to be on watch down at the Bio-md lab this afternoon?" The rest is tragedy.

This is going to be a great series

If I was reading this series I would absolutely call it a page turner. After the way part 1 is ended, I couldn't start part 2 fast enough. I really liked part 1 and part 2 does not at all disappoint.

Brilliantly thought out and believable.

Iceman's evolving capabilities, especially why he insists on calling Shiloh as CAG is touching.

This is more realistic, concentrating on logistics, materials, etc. instead of warping around the galaxy.

screaming to the heavens “WHY?”

It was a long wait for this to come out. The story picks up right were book one left off, in the middle a large space battle. Really got my heart pumping.

Aside from all the amazing science fiction technology, spaceships, and in depth political decision making. One of my favorite parts of The Synchronicity War Book 2 was the artificial intelligent (AI) beings. How Wehr obviously made it a point to explore humans inane ability to create and live by prejudices and discriminate towards other. In this case the AI’s. A lot of time is spent getting to know, my favorite is Iceman, several of the AI’s and Shilo’s battle to get them recognized as sentient beings.

I am really glad that the meaning of the visions that Shilo sees was explained. Because of that the title of the series also makes more sense. In the future the technology to send messages to people in the past was, apparently, created and is being used on both sides of the war. The humans are sing it to send us messages about key things that we need to make sure to do, while the aliens are also sending us visions full of false information. As you can imagine this creates a bit of turmoil.

Then there is the brief introduction of a second alien race, friend or foe? We do not get to find out. Because almost as soon as they are introduced the book ends. Finding me on my knees screaming to the heavens “WHY?”, because we all have to wait a few more weeks to learn about the interstellar plot that was about to be unfolded.

There really isn’t anything new that I can say about Luke Daniel’s performance. I have never heard a bad one from him. Some may not like his subtle accent, different than mine, or his use of the same voice from book to book. Personally I love it. I know that no matter what is going on with the storyline Daniels will give a stellar performance. Sure some are better than others but he really shines in this series.

Audiobook purchased for review by the ABR.

Would you listen to The Synchronicity War: Part 2 again? Why?

This series to date has been good enough to listen to again in a few years.

I feel like I'm not getting my money's worth when the books are under like 12 hours. This series so far could easily have been put out in longer books.

After reading Book 1, book 2 is exactly what I hoped for. I am now looking forward to Part 3

This has been one of the toughest reviews I've written strictly because nothing impressed me in book two. It was as if I was listening to a well laid out plan: start of book two, review end of book one; end of chapter eleven: recognize that humanity is lost on earth; end of chapter sixteen, find earth like planet and start transporting restart of humanity, chapter twenty, have AILs firmly entrenched and accepted in human society; Chapter Twenty One, have male protagonist and supporting female take time out to start first generation of humanity away from earth but at end of chapter need scene to bring male back to war with AILs not only finding old enemy but find third race fighting old enemy

Even better than the first. I'm hooked!

Nice balance between technology and storyline. Great book. I hope that the author continues the series into book #4.