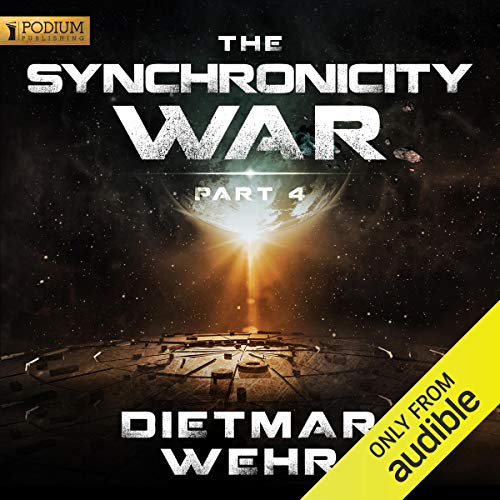 The unprovoked war with the Sogas has reached a climax. Over a hundred Sogas ships appear to be headed for Earth, and Space Force is in no condition to stop them. As if that isn't bad enough, the nightmarish Insectoids will be arriving in Earth's orbit within months to finish off the survivors of the impending Sogas attack. Admiral Victor Shiloh, Commander Amanda Kelly, and Valkyrie will have to make some heartbreaking decisions if humanity is to have any chance at all of avoiding extinction in this final chapter of the Synchronicity War saga.

The first two books in the series drew me and wouldn't let me know. By the end of the third book I was frustrated beyond belief that the author had taken the story in the direction that he had. So much so that I wouldn't even have listened to the 4th book had I not already purchased it. However, having now finished the forth book I have to say that the story was brilliantly executed and I'm very pleased with how it ended.

The only negative I have with the entire series at this point is the A.I voice narration.

if at first you don't succeed...

time travel without serious limitations. I lost count of how many times someone went back in time and tried again. I didn't get halfway through the book before I skipped to the end t9 make sure all came out ok. disappointed with the direction the story took.

The A.I.'s guide to human sexualluty!

This series provides, not only a real glimpse at a Kobayashi Mirue, but into parts of the human psyche not usually dealt with in a sci-fi space adventure. The major thing that sets this apart from other simaliar sci-fi efforts, is it's exploration of the psyches of A.I.'s that are not only not out to destroy humanity, but may even be more noble and loyal than human's, and certainly a perspective not portrayed nerealy enough. For me, my only problem was in the term A.I., for surely their intelligence was not artificial, just saying!

I find myself sad that this will be the last

If you haven’t listened to the reset of the The Synchronicity War series, this review may contain spoilers of those books.

Here we are with Book 4 of The Synchronicity War the final installment. I find myself sad that this will be the last. I really hope that Dietmar Wehr writes more military space operas. If you haven’t listened to the previous three books, do your self a favor and do so.

Now actual time travel is possible. We can not only send messages back in time, we can send an AI that doesn’t exist in the past back to warn ourselves of the ultimate destruction coming our way. The question is, how far back in time would you go? Would you go back just far enough to be able to build enough ships to make sure you win the unwinnable battle or would you go back far enough to stop your enemy at the source?
These are the decisions that Shiloh must make.

Yes, this series contains time travel. If you are like me you know that this is a tough area to write about. Paradoxes open them selves up without even realizing it. Dietmar Wehr does a great job making the time travel premise makes sense and seem plausible.

I am really looking forward to more coming from Wehr. He is able to make a space opera journey have heart and soul. While keeping all the technology high tech with just enough techno-babble to keep me interested but not so much that I got board. The emphasis on the growth and development of the AI beings was one of the items that sends this series over the top for me. Along with amazingly deep and multidimensional human characters and also evolve throughout the story.

Throughout this entire series Luke Daniels delivered a performance that was amazing in all aspects, and this last book is no exception. Daniels will continue to be at the top of my go-to narrator list because of performances like the one he give not once but four times in this incredible series.

If you want interesting characters, amazing space battles and rival those of Jack Campbell, time travel that works, hostile and friendly aliens, convincing technology and well a whole lot of fun. This series is for you.

Audiobook purchased for review by ABR.

more of the same started to be boring, should have stopped after the third book.
need to maybe see the retro war to see what it is.

interesting concepts and love the battle descriptions. The book can feel a bit try at times however it picks up, totally worth the wait

I listened to this entire series. There are obvious plot holes and slow story development. If you just like a decent story about space wars and can willingly not think to deeply then it's worth the time. Luke Daniels has brought all he could to make this book interesting.

A possible roadmap for the Human Race!

I couldn't put it down and when I did, I couldn't wait to pick it back up! My military background made it even more enjoyable (Retired US Army).

A chapter in this book that RIVALS anything !!!!!

I usually don't write reviews in detail, but I had to in this case. I've been a solid Sci-Fi Space opera listener for 4+ years with over 200 books in my audible account. In this book, part 4, there is a chapter that encompassed the up / down / and most satisfying listen I've experienced in any book ever. Chapter 10. I'm not going to spoil anything in this chapter, but I equated Chapter 10 in this book to the last 20 minutes of the Shawshank Redemption movie (What Andy Dufrain did to escape prison and the plan he hatched that was disclosed, to Victor Shiloh and what he pulled off with the OC). I've listened to Chapter 10 at least three times - and Chapter 10 is only 10 out of 28, but this one proved the writing style the performance of Luke Daniels, and the entire storyline in one amazing and most satisfying part. AMAZING!!!! writing and performance.

was a fantastic read. the voice actors really brought the story to life. I would listen to it again