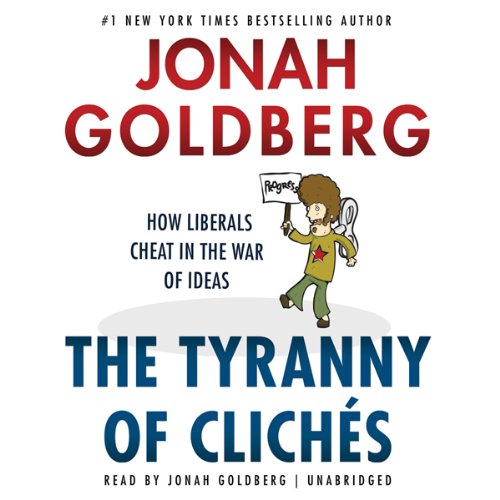 The Tyranny of Clichés

The Tyranny of Clichés

“We are only as free as the least free among us.” Is that really true, or is it the kind of statement most people will nod at without actually thinking about? Best-selling conservative author Jonah Goldberg calls it a liberal cliché—fundamentally wrong and potentially very dangerous.

According to Goldberg, if the greatest trick the Devil ever pulled was convincing the world he didn’t exist, the greatest trick liberals ever pulled was convincing themselves they’re not ideological. Today “objective” journalists and academics and “moderate” politicians peddle some of the most radical arguments by hiding them in homespun aphorisms. Barack Obama casts himself as a disciple of reason and sticks to one refrain above all others: he’s a pragmatist, opposed to the ideology and dogma of the right, solely concerned with “what works.” And today’s liberals follow his lead, spouting countless clichés.

Goldberg exposes the truth behind many of these clichés, including “the living constitution,” “social justice,” and even simple words like “inquisition”/ With humor and passion, he dismantles these Trojan horses to show how our thinking is profoundly shaped by deeply ideological concepts and convenient myths that most of us accept uncritically—to our great detriment.

You’ll learn the real history of dangerous liberal clichés, such as:

“One man’s terrorist is another man’s freedom fighter.”

“We need complete separation of church and state.”

From Gandhi to Marie Antoinette to Madonna, Goldberg explores the context of clichés in our culture and shows how often we rely on them at the expense of serious thinking.

“Straw man down! In the PC prison yard of accepted political thought, Jonah Goldberg has just shivved progressivism. Bold, brilliant, and bursting with humor, every page of  The Tyranny of Clichés is right on the money. If you thought  Liberal Fascism was good, wait till you read  The Tyranny of Clichés—it is fantastic!” (Brad Thor,  New York Times best-selling author)
“What can one say to the self-proclaimed ‘independent’ who never has nor ever will vote other than Democratic; or to the wise soul suggesting, of any conflict at all, ‘the truth must lie somewhere in between?’ Mr. Goldberg reminds us that one must stand up and demand of the muddled and supine either an absolute declaration of their principles and acknowledgment of the results of actions having flowed therefrom or a straightforward admission of their intransigence in refusing a concise reply.” (David Mamet,  New York Times best-selling author)
“Everyone says ‘think for yourself’ but very few people do. In  The Tyranny of Clichés, Jonah Goldberg reveals how we’ve become trapped by ideas we think we understand but don’t. A must-read.” (Vince Vaughn, actor and producer)

I have been reading Goldberg in National review for sometime, and his unique style of writing migrates well to this volume.

Jonah Goldberg reads his own book that takes the reader on a masterfully reasoned deconstruction of common liberal ideas and arguments. Not only does the book present numerous well formed and presented arguments against liberal sentiments commonly (and incorrectly) held to be true, but he also provides tons of history and academic papers backing up his argument. Also, Goldberg weaves in quite a bit of humor and geeky movie references to keep things entertaining in the midst of all the serious arguments.

If you lean hard left, you will probably hate this book. Goldberg absolutely shreds some liberal positions, sometimes several times over. This will either frustrate you or you will totally disagree at such a fundamental level that the book will not be at all enjoyable.

What made the experience of listening to The Tyranny of Clichés the most enjoyable?

I found the author's voice to work extremely well in reading his audiobook. (Unfortunately, there are a few authors that have given such poor readings that I couldn't help but wish a professional audio narrator read it instead.)

What was one of the most memorable moments of The Tyranny of Clichés?

I enjoyed the fact that there were times Goldberg had natural laughter as he shared his opinion. Makes you feel like you're a part of the "conversation."

What does Jonah Goldberg bring to the story that you wouldn’t experience if you just read the book?

His warmth and excitement about this material - there were many times that it felt like I was in a classroom listening to this.

I absolutely hated his last book, "Liberal Fascism," but he has completely redeemed himself with this book. It helps not to count an author out - check out other audio productions of their books. You might wind up very surprised.

Worthwhile for both liberals and conservatives

If you are a regular reader of Jonah Goldberg's work for National Review (as I am), there isn't a lot in here that you've never heard before. But it is all collected in one place and nicely bound up with a bow.

I wouldn't call it an anti-liberal screed, which some books by conservative authors have an unfortunate tendency to become, so I feel comfortable recommending it to non-conservatives as well as true believers. If you're a liberal and take this author's comments to heart, even if they don't convert you to The Right Side of History (TM) you'll at least be able to give a better argument than just spouting a cliche and thinking you've won the College Bowl of argumentation.

As a narrator, Jonah did a good job, with only one problem - when he's giving an aside, he drops his voice to a nearly inaudible murmur - so when driving, those parts get lost. Fix that and I'd give him 5 stars for narration.

. Recommended this book to many friends, because it is informative and really funny

Which character – as performed by Jonah Goldberg – was your favorite?

Reminds me of good college lectures.

References to Monty Python. (Yes, I know the words to “I’m a Lumberjack.”)

A must read—especially if you have kids

This is a fantastic book, and it’s one of the few that I will probably force my kids to read when they’re in high school. I live in a fancy city where my kids go to a fancy school with a bunch of other fancy kids whose parents have fancy degrees. The sorts of clichés that Goldberg attacks in this book are woven into the fabric of the society in which my kids and I move. This book will arm them to fight back against at least some of the sillier forms of those clichés. It is truly a tremendous work, and Goldberg reads it with such fun and verve that you can burn through it quickly.

Read this in the Era of Trump

An excellent, example-driven indictment of liberalism at its stupidest. Goldberg is a mensch with a devilish sense of humor. A nice combo!

You can judge this one by its cover

This book is a good discussion on background clichés that form most of our life and culture. However I must warn you it is pretty politically conservative or American right. It tends to toward a preach to the choir style of book.
is a good, clean romp through what we take for granted. It discusses the background ideas that build everything that "we know" or talk about or all the small details that make up arguments that nobody actually makes.
The author is an excellent reader and makes the book a lot more interesting. It is however one of those books that you already know whether you like it or not. If you enjoy political conversations or talk radio or anything like that then you probably will like it. If you don't then you probably won't however it is good data that anybody can use. So I recommend it.

Would you listen to The Tyranny of Clichés again? Why?

Yes! Jonah is a great reader of his own work.
The content is amazing, and I feel that everything I was ever taught was just wrong and biased.

What was one of the most memorable moments of The Tyranny of Clichés?

The explanation of Social Justice is brilliant.

The cliche that "understanding breeds peace" is so wrong.
I notice in my life that the people I fight the most are the ones that I understand the best.

Crucial reading for the intellectually curious.

Always insightful, Goldberg expresses his ideas with clarity, cogency, and honest enthusiasm, exposing the traps we fall into when we mindlessly espouse the standard cliches. We would all benefit from thinking before we speak, and this book reveals why we should practice doing so!
Great history included.
I really enjoyed listening to the author narrate his own work.

Great read for both the conservative and the liberal. I highly recommend it to anyone who finds the rhetoric behind politics interesting.