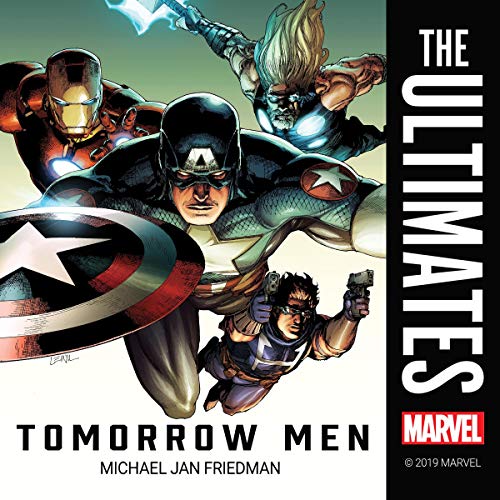 The Ultimates - the first government-sponsored cadre of super heroes - was assembled to face threats to humanity too insanely powerful for other operatives to handle. Led by a general who gave an eye in the service of his country, the super-powered roster includes a billionaire playboy in a high-tech suit of armor, a World War II super-soldier whom fate has thrust into the 21st century, an environmentalist icon who claims to be an ancient Norse god, and a scientist whose mutant powers allow her to shrink to the stature of an insect.

But even the Ultimates are unprepared for a quintet of mysterious visitors who appear in the midst of the team's top-security base of operations, claiming to be emissaries from the future. These "Tomorrow Men" say Earth's civilization are at a crossroads - on the verge of enslavement by a secret, immensely efficient organization known in the future as Tiber. Only the Ultimates have the skills and the firepower to ferret Tiber out of its nests around the world and crush its plans for global conquest. But there is much more the Tomorrow Men will not say. After all, they don't want to alter the timeline any more than they have to.

But wealthy Tony Stark, a.k.a. Iron Man, is dying by degrees of an incurable medical condition. For him, the temptation to make an additional change in the timeline may be too great to ignore - even though mankind's future might be damaged in the process.

Too many times did the music or sound effects become louder than the voices to the point of having to rewind multiple times to make sure I heard everything correctly. The story was great the voice actors were perfect but the production itself could've been better which sucks because it's not like it sounds low budget.

I had the same issue with the other Ultimates audible so when it happened again on this one I finally had to write a review with negative feedback. Though it does take away from the overall project. I would still recommend it to anyone interested. It's more than worth the listen.

Graphic Audio always do a great job making their audio books. The story and voice acting was perfect. Highly recommended

This is how you do Marvel Stories