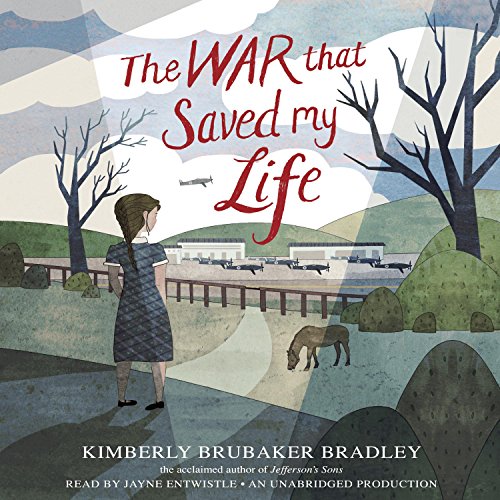 The War That Saved My Life

The War That Saved My Life

An exceptionally moving story of triumph against all odds set during World War 2, from the acclaimed author of Jefferson's Sons and for fans of Number the Stars.

Nine-year-old Ada has never left her one-room apartment. Her mother is too humiliated by Ada's twisted foot to let her outside. So when her little brother Jamie is shipped out of London to escape the war, Ada doesn't waste a minute - she sneaks out to join him.

So begins a new adventure of Ada, and for Susan Smith, the woman who is forced to take the two kids in. As Ada teaches herself to ride a pony, learns to read, and watches for German spies, she begins to trust Susan - and Susan begins to love Ada and Jamie. But in the end, will their bond be enough to hold them together through wartime? Or will Ada and her brother fall back into the cruel hands of their mother?

This masterful work of historical fiction is equal parts adventure and a moving tale of family and identity - a classic in the making.

"With her skillful presentation of true-to-life characters, Entwistle's narration is totally compelling." (AudioFile)

This book is listed in the "Kids" section for 8-10 year olds but I think that scope is too narrow. I read a wonderful review about it in the newspaper and several other excellent reviews here on Audible so I gave it a try. If anything the concepts presented might be a bit too much for younger children to understand and cope with. To me, the story and writing transcend age and the book really belongs in the general historic fiction genre.

Entwistle's narration was absolute perfection. I think her experience as an actor really shows in the way she was able to voice each character. This was an impressive performance and the first time I've heard her narrate. I hope she does more reading here on Audible.

Bradley's writing was excellent and so powerful in the way she showed each character coping with limitations and difficulties and growing in strength to reach beyond their circumstance. The villains were truly harrowing and the depiction of life in World War II Britain was multidimensional and completely riveting. I loved this book and recommend it whole heartedly to historic fiction lovers no matter your age. A perfect blend of narration and writing. Not to be missed.


Normally I wouldn't write a review for a book with so many lovely reviews already posted, but there is a chance that somebody will read just one more review, and make the decision to read this fantastic book. The winner of the 2016 Newbery Honor, as well as winner of the 2016 Schneider Family award and a NY Times bestseller, The War That Saved My Life is marketed as a *Young Readers* book, yet ranks in the top 10 of my 2016 *best of* reads. Of course, this is a book I never would have selected without the guidance of my watchful and wise librarian sister. A PhD librarian in charge of children's and young adult purchases for a major library, I like to say she keeps me abreast of the best, and my own library has dozens of children's books when the youngest person in my home is 10 years out of college. This is a book that enriches any reader.

TWTSML is historical fiction that is gripping, heartwarming, and empowering. While set during WWII, the story is more of a personal challenge with the horrible specter of Hitler's Nazi regime hovering over like a dark and deadly threat. I've talked with readers that felt it was sentimental and sugary, but have to disagree. Though I did at times think of Heidi, National Velvet, and Shirley Temple, this is more sophisticated and psychological. The writing is flawless and delicate telling the story without mawkishness, and without delving into the atrocities and intricacies of WWII. Ada is a ten yr. old girl that overcomes many cruelties in life before her own strength is given the chance to be exercised. Many of the situations could be used as inspirational sparks for today's young women, highlighting courage, honesty, and determination. It takes something as horrendous as the war and threat of losing her home and life for her to stand against certain abuse and find the courage and strength to be heard. The subtleties, especially when understood from an adult's knowledge of the world, and of parenting, are exquisite blanks spaces that call out to the reader: a look into a mirror at hair that has never been brushed; a pretty dress that feels too pretty to be worn; a firm and comforting hold. The understanding we have as adults gives this story a depth that children won't know. Here it is no cliché to say beautiful and heartwarming.

[*Note: For young readers, it might help to give them some history of WWII. My own granddaughter didn't have much knowledge of that part of history, never having discussed Hitler or the children that were sent away from home, "out of harm's way."]

Among the VERY best!

This story and the performance by Jayne Entwistle make me feel a little badly about all the other books I've given five stars. This one deserves every little point on every single star!

Loved this sweet, heartbreaking story ! Although catagorized as a children's book, it isn't juvenile at all. Suitable for anyone who loves a story told from a child's perspective. Superlative narration.

Sad to say that based on all the glowing reviews, I was really hoping for so much more, including greater character development and depth to the story. Also, despite most listeners maintaining that the book appeals to both young and adult audiences, I truly felt as though the story was written to attract those from approximately ages 8-15.

I didn't want it to end!

A good listen and a great performance. I will listen again.

Loved every moment of this story! Left me wishing for more. Hoping for a sequel!

I never wanted it to end

I don't usually read much fiction, but do enjoy a great story with an excellent narrator. I would give this audiobook 10 stars if I could. The story is both warm and heartbreaking and the narrator is perfect. I just finished it and am close to tears because I enjoyed it so much and never wanted it to end.

What an excellent book! Perhaps the best I've ever read/heard in terms of telling a story from a child's perspective, and communicating both the psychology of an abused child and growth and recovery from abuse. Without sticky sentimentality. Found it from a promotion as a good "family read", and I think it would be, but if you plan to share it with kids, be ready to encourage them to talk about it as you go along. For kids who have been abused themselves--or adults for that matter--it could be very therapeutic handled well, but could also be triggering, so reading/listening together and talking about it would be even more important. But to me that's part and parcel of what makes it such a good book.

Splendid. As strong a novel as I have read in months. Deserves respect and a wide audience. My 10-year-old daughter loved it, and so did my son who's nearly 7.