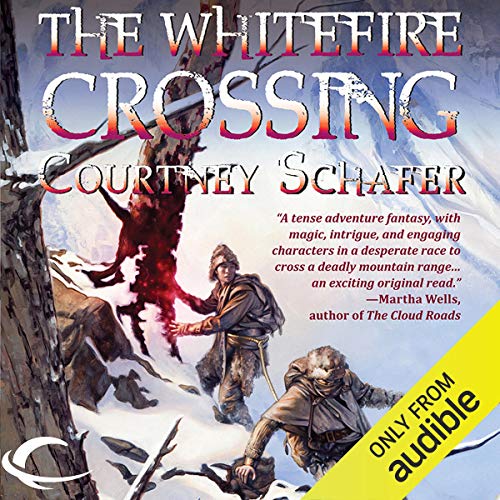 In The Whitefire Crossing: The Shattered Sigil, Book 1, fantasy writer Courtney Schafer combines adept storytelling with a deep knowledge of mountain climbing to bring listeners Dev, a smuggler who specializes in carrying items through the steep, treacherous Whitefire Mountains that divide the magical city of Ninavel and the magic-secular country of Alathia. Under Andy Caploe's intense narration, Dev comes alive as a confident, charismatic force, keeping listeners on the edge of their seats with his challenging mission to transport a young magician's apprentice, Kiran, into the safety of Alathia. Full of magic, subterfuge, and adventure, Book 1 of The Whitefire Crossing is a surefire bet for fans of narrative fantasy and quest stories.

Dev is a smuggler with the perfect cover. He's in high demand as a guide for the caravans that carry legitimate goods from the city of Ninavel into the country of Alathia. The route through the Whitefire Mountains is treacherous, and Dev is one of the few climbers who knows how to cross them safely. With his skill and connections, it's easy enough to slip contraband charms from Ninavel - where any magic is fair game, no matter how dark - into Alathia, where most magic is outlawed.

But smuggling a few charms is one thing; smuggling a person through the warded Alathian border is near suicidal. Having made a promise to a dying friend, Dev is forced to take on a singularly dangerous cargo: Kiran. A young apprentice on the run from one of the most powerful mages in Ninavel, Kiran is desperate enough to pay a fortune to sneak into a country where discovery means certain execution - and he'll do whatever it takes to prevent Dev from finding out the terrible truth behind his getaway.

Yet Kiran isn't the only one harboring a deadly secret. Caught up in a web of subterfuge and dark magic, Dev and Kiran must find a way to trust each other - or face not only their own destruction, but that of the entire city of Ninavel.

Loved the plot, loved the characters

I loved this story! It was fast-paced, kept its sense of mystery and urgency to the end, and I found both of the main characters really likeable. The author has built an interesting world with an unusual take on magic. I couldn't stop listening and I find myself impatient for the next book!

Well, it's official. I have another favourite! I absolutely loved this book. The plot is tight and fast moving and the main characters are engaging and complex. I wished it was longer... I loved the magic system, which reminded me of the old, honest-to-goodness magic that I read in my early fantasy books in my teenage years, but with a very fresh take. How the magic is used or not used is well thought out. One of my favourite moments was the "fight" between Ruslan and Kiran. The only thing I was a little put off with was the narrators weird emphasis on some of the words. Still, overall, a good narrator.

What made the experience of listening to The Whitefire Crossing the most enjoyable?

Andy Caploe made this story fun to listen. The first 1/2 of the books was real exciting, but it kind of petered out in the conclusion. There is a good twist to the ending. Overall well worth the read.

A character-driven story more than concept or plot-driven. Not bad, if you like evil blood magic and mountaineering. Story moved too slowly for audiobook format. Chapters alternated between mountain guide Dev, in 1st person POV, and young mage Kanin, in 3rd person. Thus, listeners hear the same events from two different perspectives. This overlapping felt slow and frustrating. I wanted the plot to move faster. Also, I saw no reason for the unusual choice of perspective style.

This book, and series, is amazing. It absolutely does not get the attention it deserves! the writing is fantastic, the plot of fast and fun, and the magic is a joy to read. What's more, Courtney Schaffer does something unique with the physical geology/adventure/climbing/hiking aspects of a journey that I have never encountered before.

A brilliant book, and a great audiobook production too. Well done.

I have to say, this book really grew on me. If I had reviewed it after the first 3rd, I would have given it 3-stars as a promising first book, but by the halfway point I was really engaged. It took the author a while to set up the total plot line of the book, but it was worth it. I look forward to the 2nd book.

What did you love best about The Whitefire Crossing?

It was well written, well paced, and well read.

What does Andy Caploe bring to the story that you wouldn’t experience if you just read the book?

I have both read and listened to this book, and I think that Andy Caploe brings it to life in a way that is absolutely refreshing. There are one or two rather scathing reviews about this narrator on here that seem so out of place (and kind of personal?). He does a wonderful job. So many books that I have listened to have narrators that speak in an almost monotone dynamic throughout the book. This guy performs! He is always engaged in what he is saying, and pulls you into the story. I would listen to him again.

Would you try another book from Courtney Schafer and/or Andy Caploe?

I would not try another book for Schafer or Caploe. I read the reviews on Amazon and was expecting a great story. I may not have liked it because it was not very deep and the narration was horrendous. If you are interested in this book I would suggest reading it instead of listening to it. Andy Caploe's narration is one of the worst I have ever heard.

After suffering through the book the author uses what I feel was "dues ex machina" to get the characters out of the bind they had gotten into. Thus, totally wasting the time I put into listening to this book.

Andy Capole is an award winning narrator so I was very suprised when is narration totally ruined this book. He enuciated every sylable. He read veeerrrryyyy sssslllllooooowwwwllllyyyy. Iiiiiffff tttthhhiiiiisss isssss aaaannnnooooyyyyiiinnnngggg tttthhhheeeennnn yyyyoooouuuu ggeeettttt aaaannnn iiiiiddddeeeaaaa ooffff wwwwhhhhaaattt iiittt ffffeeelllltttt llllliiiiikkkkeeee llliisssttteeennniiinnngggg tttooo hhhhiiimmmm. Listening was excruciating until I remembered that Audible has a speed up function. I had to up the speed to 1.25. When I did the speach ACTUALLY sounded normal.
Also his mage voice was an annoyingly afeminate male. I don't mind the character being gay, but ugh, the voice he used was WAY over the top.
The f-word is used throughout the story. No big deal, it is in a lot of books and does not detract. However, everytime Andy Capole said the f-word it sounded like a child saying it and thinking he was being a big boy using a bad word. His emphasis on the word was very distracting.

I can't think of any. I would like to say the discription of the mountain terrain and mountain climbing was done well. However, after hearing the same discription a few times, the description becomes annoying. So what started out as good became boring.

I wish I had read the book so I would know whether or not Andy Capole single handedly destroyed it or if it really is just a mediocre story. I listen to books with my husband as we drive 40 minutes to work and 40 minutes back home. If he had not wanted to plug through it I would have put myself out of my misery and not finished the book. As it was we plugged through, groaned a lot, and were thankful when we sped the narration up. Upon finishing the book we looked at each other, sighed, gave a big high-five and congratulated ourselves on making it to the end.

If you could sum up The Whitefire Crossing in three words, what would they be?

What was one of the most memorable moments of The Whitefire Crossing?

The depictions of climbing in a fantasy setting were phenomenal. The characters (once I started reading the book rather than listening) were pretty good.

Would you be willing to try another one of Andy Caploe’s performances?

No. Never. I just checked to see if I'd purchased anything else narrated by him and found, to my relief, that I hadn't. He voice-work is awful. He sounds like one of those robot voice programs. He made all the character sound like whiny children, when in fact they were actually pretty good.

Extreme reaction? Yeah, I had to stop listening to the book and buy a physical copy just to enjoy it. This narrator should never read anything aloud again.

Overall, the story is good and fairly original. The ending delves into the convenient to make it work, but I would read the sequel. Note, I said "READ". I will never listen to another book narrated by Andy Caploe. I'm trying to figure out if I can request a refund for this audio presentation. It's not the author's fault. She does fine.

Would you try another book from Courtney Schafer and/or Andy Caploe?

My daughter wrote a story once about a trip with her cousin to the bounce house and CiCi's pizza. I also listened to a 90 year old man with a sinus infection eat a sandwich for a half hour. Both were more enjoyable than this.

I think I'm done with Audible until I really really need to listen to a book. This was the dealbreaker. I waited so long for a precious credit and wasted it on this.The absolute worst thing I've ever heard. I know it's not Audible's fault, but I'm so angry that this even exists that I have to take it out on someone. Sorry Audible, you've gotten me through some long days, but I think we should take some time apart.

I kind of feel sorry for him. What tricks did this guy have to turn to be paid to read a published work aloud? I lost a contact rolling my eyes so hard. Like every character to sound like Bill S. Preston, Esquire? This is the book for you. I hope you don't read to your kids at night Andy.

What character would you cut from The Whitefire Crossing?

That's not really the issue right now, Audible. The issue is Andy Caploe. A bad book was made infinitely worse by this man. I listened "at" it because I was so put off by the narration. In between the groans and facepalming I had to pull the plug a few times because I was embarrassed for him and couldn't go on.