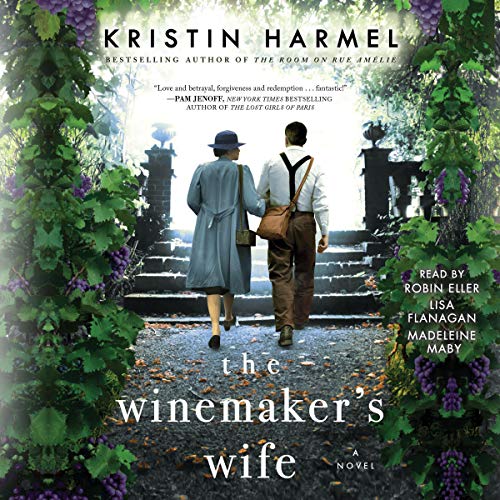 From the author of the “engrossing” (People) and “poignant” (Booklist) international best seller The Room on Rue Amélie comes a remarkable and moving story of love, danger, and betrayal: two women in France in the darkest days of World War II and another in present-day America on a quest to uncover the secret that connects them.

At the dawn of the Second World War, Inès is the young wife of Michel, owner of the House of Chauveau, a small champagne winery nestled among rolling vineyards near Reims, France. Marrying into a storied champagne empire was supposed to be a dream come true, but Inès feels increasingly isolated, purposely left out of the business by her husband; his chef de cave, Theo; and Theo’s wife, Sarah.

But these disappointments pale in comparison to the increasing danger from German forces pouring across the border. At first, it’s merely the Nazi weinführer coming to demand the choicest champagne for Hitler’s cronies, but soon, there are rumors of Jewish townspeople being rounded up and sent east to an unspeakable fate. The war is on their doorstep, and no one in Inès’s life is safe - least of all Sarah, whose father is Jewish, or Michel, who has recklessly begun hiding munitions for the Résistance in the champagne caves. Inès realizes she has to do something to help.

Sarah feels as lost as Inès does, but she doesn’t have much else in common with Michel’s young wife. Inès seems to have it made, not least of all because as a Catholic, she’s “safe.” Sarah, on the other hand, is terrified about the fate of her parents - and about her own future as the Germans begin to rid the Champagne region of Jews. When Sarah makes a dangerous decision to follow her heart in a desperate bid to find some meaning in the ruin, it endangers the lives of all those she cares about - and the champagne house they’ve all worked so hard to save.

In the present, Liv Kent has just lost her job - and her marriage. Her wealthy but aloof Grandma Edith, sensing that Liv needs a change of scenery before she hits rock bottom, insists that Liv accompany her on a trip to France. But the older woman has an ulterior motive - and some difficult but important information to share with her granddaughter. As Liv begins to uncover long-buried family secrets, she finds herself slowly coming back to life. When past and present intertwine at last, she may finally find a way forward, along a difficult road that leads straight to the winding caves beneath the House of Chauveau.

Perfect for fans of Kristin Hannah’s The Nightingale and Kate Quinn’s The Alice Network, The Winemaker’s Wife is an evocative and gorgeously wrought novel that examines how the choices we make in our darkest hours can profoundly change our lives - and how hope can come from the places we least expect.

I’m an avid user of Audible. Thus far I’ve been pleasantly surprised at the voice work on the books I’ve selected. The Winemakers Wife, however, has the worst performance I’ve heard yet.
The woman in the role of Inés sounds like she is reading a children’s book. Her voice is so jarring that it distracts from the story. Very disappointing.

I found the narration, sadly unconvincing. The attempted accents were a distraction from the story.

This could have been so much more enjoyable to listen to had the narrator not used such awful voices for certain characters. The high- pitched whining of Inez was almost unbearable at times and the over-the-top French accents took away from being able to fall into the story as they were so distracting.

Although I loved the story line I found the narrators hard to listen to and thus it took away from the story.

The last few chapters are the interesting part

I really liked The Room on Rue Amelie and was looking forward to this book by the same author. I found it to be quite difficult to get into. The characters are pretty one dimensional - the mid life crisis divorcée, the young naive, the rich old lady, the perfect man etc.
The protagonists are unlikable - one is whining too much, another is just so useless and naive and the other is very principled until she is not.
The “French” accent from Celine’s point of view is quite bad, it’s more a combination of German and oriental than French.
The language is quite poor and dry, some expressions are overused like “you must understand” or “hugging the shadows”. And the dialogues are too long and leading nowhere for the most part.
The end of the book is pretty good though, but the book could have done with 80% less words. It’s like the author had a good idea for a short story and the editor insisted to turn it into a longer novel...

This is a wonderful story that brings an important element of WW2 to life. Some of the narration is distracting due to the narrators poor imitation of a French accent.

I stopped listening and went out and purchased the book
Enjoyed the story but found the narration difficult. Could not tell which accents were meant to be German and which French. Found it contrived and overdone

I love when I can't figure out the ending halfway through! Narration was good as well.

Good Story, Narration not so much

The story was pretty good, pretty predictable if you read much historical fiction. Good story nonetheless. The narration wasn’t good at all, and that detracted from the overall story.

this was a beautiful story. The ending was perfect. Haven't cried that much from a book in a while!!

The story was great but the narration was so awful, I kept having to put it down for a bit. One of the main characters sounds and behaves like a surly teenager - I was shocked when it turned out that she was supposed to be 41.

The bizarre half-French and whiny American accents were jarring. If you have to endure this book, read it for yourself instead.

But I do not recommend the book. The plot is transparent, the characters are uniformly unlikeable, and the decision to switch between current day and WW2 every other chapter was forced. I drank a coupe of champagne at the end just to toast that I would never spend another moment on this book.

The story line was good, but would have been so much better with a stronger female lead. Why do writers insist on making women stupid? I know no one who would have reacted as this dumb girl did. It is just not believable. I finished the book hoping to find out more about the main character, but just not much. Very disappointed.

More of a romance novel than historical fiction

If I were Kristin Hannah (The Nightingale) or Kate Quinn (The Alice Network), I'd be insulted that this book stands on the success of those fantastic novels and tries to put itself in the same category. This is nothing but a romance novel, and a weak one at that. I could only listen to half of it - 5 ½ hours of my life I can't get back. The narrating was so annoying - all 3 narrators were subpar - but perhaps its because the writing was so juvenile.

Seriously, the cover should have a shirtless man on the cover with a great chest like other cheesy romance novels do.

I was disappointed by this book, the timelines were inconsistent in places and the story was too predictable and cliche. But what was most annoying was the narrators, the one who read the Celine character was unbearable, and the Olivia narrator wasn’t any better.

Im new to this author and enjoyed this end of summer treat. The book was filed with war love sacrifice and tragedy, ill not ruin the story for You but the last chapters pierced my heart and a few tears of joy and sorrow fell

This story proves blood is not always thicker than water

What a great story. It tells of the cruelty of the nazis and how they devastated captured territory. It tells of foolish immature young adults and decisions they make can have far reaching consequences. Also the goodness of many people during the war and self sacrifice and courage two interwoven stories. Generations apart of love hate revenge redemption. A credit well worth it

great characters. just when you think you know what's going on it takes a spin. kept me coming back to find out what happens next. Nice wrapped up ending but leaves some play for a 2nd book.

This book felt very predictable. The twists and surprises could be seen a mile away. I also struggled to feel for any of these characters. I think there just wasn't enough character development. Maybe the WWII romance has just been overplayed.