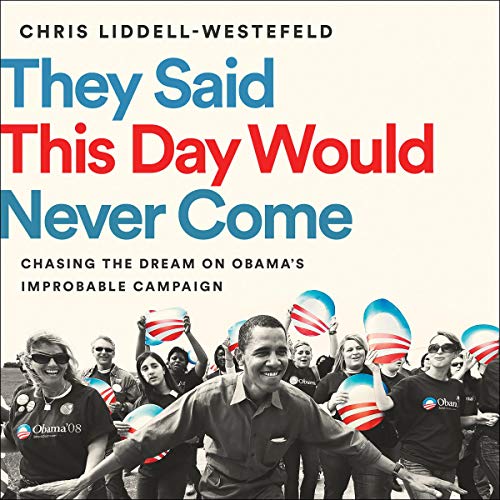 They Said This Day Would Never Come

The thrilling, unlikely story of Barack Obama's first presidential campaign, as told by the volunteers and staff who propelled the longshot candidate to the presidency

In the year leading up to the Iowa caucuses, few thought a freshman senator named Barack Hussein Obama would be able to win the Democratic nomination - not to mention become the most popular leader in the world.

But something was stirring. Hundreds of young people from all over the country began assembling first in Iowa. These "kids" became the foundation of one of the most improbable presidential campaigns of the modern era.

Chris Liddell-Westefeld was one of those kids. He and thousands of other staff and volunteers dedicated every minute of their time, intelligence, and resources to help elect Barack Obama, as what started in the midwest spread nationwide. Drawn from more than 200 interviews with alumni including David Axelrod, David Plouffe, Alyssa Mastromonaco, Dan Pfeiffer, Valerie Jarrett, Josh Earnest, Tommy Vietor, Jon Favreau, and President Obama himself, They Said This Day Would Never Come takes listeners deep inside the most inspirational presidential campaign in recent history.

"A readable collective chorus of hopeful voices tirelessly promoting Obama's patriotism, moral clarity, and honorable leadership.... As a campaign diary, the book succeeds in gathering representative perspectives from those who participated in its success.... Adulatory reflections on a historic presidency sure to fuel hope for future elections." (Kirkus Reviews)

"An amazing read in the words of the organizers on the ground who elected Barack Obama president. If you care about bringing about change, there are lessons in this book for you." (David Plouffe, former campaign manager and White House senior adviser for Barack Obama)

"Chris's book reminds us that politics doesn't have to feel hopeless or slimy if we're willing to put in the effort - this is a beautiful and genuinely moving oral history of how young people who believe in something and are willing to actually DO something about it can change the world." (Amanda Litman, cofounder of Run for Something)

I love how different this was than a standard audio book, with voices from all the contributors and audio clips from relevant Obama speeches along the way. Well done, miss that man, that President and that administration.

It felt so good to remember the details of the 2008 Iowa caucus and the election.
It was great to hear the words of my neighbors and friends. It made me cry to hear President Obama's complete sentences and inspiring words. It was even better to feel hopeful, excited and proud again while living in the dystopian nightmare of the Trump administration.

This audiobook is awesome. Using the different voices and the recordings of speeches made it a unique and amazing experience.

Thank you so much for producing it!

We owe you big time

Wow, I didn’t know you guys did all this for the country. We owe you more than we can ever repay. Thank you so much for this book