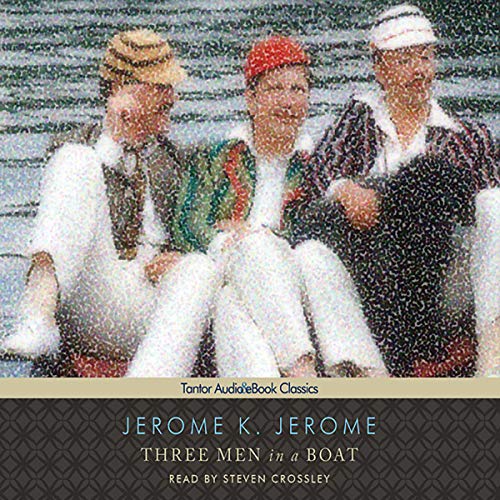 Three Men in a Boat (To Say Nothing of the Dog)

Martyrs to hypochondria and general seediness, J. and his friends George and Harris decide that a jaunt up the Thames would suit them just fine. But when they set off, they can hardly predict the troubles that lie ahead with tow-ropes, unreliable weather forecasts, and tins of pineapple chunks---not to mention the devastation left in the wake of J.'s small fox-terrier Montmorency.

Three Men in a Boat (To Say Nothing of the Dog) was an instant success when it appeared in 1889, and, with its benign escapism, authorial discursions, and wonderful evocation of the late-Victorian clerking classes, it hilariously captured the spirit of its age.

I had never heard of this and stumbled across it. Its fabulous. Clean good humor that is both dated and poignant and still relates. There is such small fun here, like packing and finding the toothbrush is at the bottom...travel humor- timeless. Simple story, with not much plot. Just a bit of observational humor and the characters are not even well-formed, with two of the three being interchangeable really. I kept mixing them up. But I was laughing and laughing and tell everyone to read this now. I am looking into more of Jerome K Jerome, for sure. There really is not much to say. Plot is given away about by the title. The narration is fantastic. He's a comic genius.

In this comic story about three friends on a boating trip up the Thames, Jerome K. Jerome, the narrator and one of the three men in question, weaves in countless anecdotes about his boatmates George and Harris and their various acquaintances, not to mention some very funny details about their misadventures. Apparently, the author had originally intended this book to be a serious travel guide, and while there are some descriptions of the sites and local history along the way, even these passages are usually told with with a good dose of irony, and in some places with quite lovely lyrical prose. My only complaint is that I kept wondering why there was not more mention of the dog, and which of his two friends he kept referring to as 'Montmorency', until the very end when I realized they were of course one and the same. Silly me. Loved Steven Crossley's narration and have since sought out more books read by him.

Not as hilarious as widely advertised

After hearing about this classic novel first on NPR, and then reading dozens of glowing reviews both on Amazon and Audible, I listened to all the samples and picked this one for the narrator's voice. The performance was fine, but all the hype had me expecting a story much funnier than this. There were funny moments certainly, but overall, I got tired of it. I don't think it's my lack of a taste for the infamous so-called British humor... I like Monty Python, Rowan Atkinson, Black Adder, and the Discworld series. PG Wodehouse is my standard refresher between heavy non-fiction works. Maybe there are varying flavors of this British humor, and Three Men in a Boat is one of the more bland dishes.

So many of these sweet tales can be related to if one has *ever* gone on a canoe trip or had any minor annoyances in life.
The stories about the people towing is among my favorites. "There's never a dull moment in the boat while girls are towing it."

I really liked his dry manner. :)

I was listening to this as I was falling asleep one night. I had almost drifted off when I found myself climbing out of the covers because I had been abruptly brought back to reality. The mildness with which the antics are put forth soon had me laughing so hard, I had to take a few moments and get a drink of water. I laughed for about 5 minutes in the other room. Story is hilarious. I wish they'd taught us about Jerome K Jerome in school. :)

If you'd like to have a good time, I would urge anyone to read this book or give it a listen. I giggled very hard through most of it because it's so easy to imagine and was extremely easy to relate to, on many levels.

Listening gave me the impression an old friend was telling me about their experiences on the water. - Pure joy and fun.

What a gem! Laugh out loud funny.

This has got to be one of the funniest books ever written. Seriously. It's classic British style humor, arch, witty, hilariously verbose, with a suitable levening of madcap slapstick. It is very much like the voyage up the Thames upon which it reports: leisurely, discursive, relaxing, escapist, and fundamentally good natured. Ten thumbs up. It took me a bit to warm to the narrator (I had begun reading the book before I downloaded the audio and had imagined a different voice), but he won me over fairly quickly. I was sorry when it was over.

Favorite Book of All Times

This story has it all. Action. Adventure. History. Geography. And is just plain funny. I’ve read it over 50 times and I’ve listened to it over 50 times. Never gets old. Steven Crossley does an amazing job of bringing this story to life. You won’t be disappointed!

Best suited for one familiar with the locales?

John Cleese mentioned how much he loved this book in his autobiography (which is very enjoyable). So I decided to check it out.

I couldn’t finish it, however. While there were very funny points in the book, and as it’s based upon a real “adventure” of the writer and two of his friends, it’s quite possible that one who is familiar with the locales, traditions and situations the author describes (someone like Cleese) would get much more out of it than I who lacks that familiarity.

What other book might you compare Three Men in a Boat (To Say Nothing of the Dog) to and why?

I bought the audiobook of Three Men in a Boat after listening to Connie Willis' To Say Nothing of The Dog. Ms. Willis' book is in some way a tribute to this, and it's hard for me to think of one without thinking of the other.

There are so many that it's hard to choose, but the scene where they are packing for their boating trip may be my favorite. Hearing about Montmorency (the dog) thinking the lemons are rats and killing them reminds me of terriers I've had - it's real and funny both.

This isn't a book that moves me...more one that pulls me in and then makes me laugh out loud.

Stephen Crossley's narration is spot-on for this book. He's an excellent choice for narrating this story.

Would you listen to Three Men in a Boat (To Say Nothing of the Dog) again? Why?

I definitely will! Clever writing, great vocabulary. I picked this one up as a recommendation from a friend. That friend just went up a couple notches in my esteem. :) I will recommend this to everyone I know. I'm surprised I've never heard of this book before.

What was one of the most memorable moments of Three Men in a Boat (To Say Nothing of the Dog)?

One of my favorite moments is when a couple of Germans get a friend of theirs to sing an aria. I will say no more on this as I don't want to ruin the moment for anyone. This did get me to actually laugh out loud as I listened to it.

Have you listened to any of Steven Crossley’s other performances before? How does this one compare?

I have not. He did a superb job!

I don't know if 'moved' is the right word for a book of this nature. However I will say that I laughed out loud several times from this story. This is something that is not in my nature to do while listening to, or reading a story.