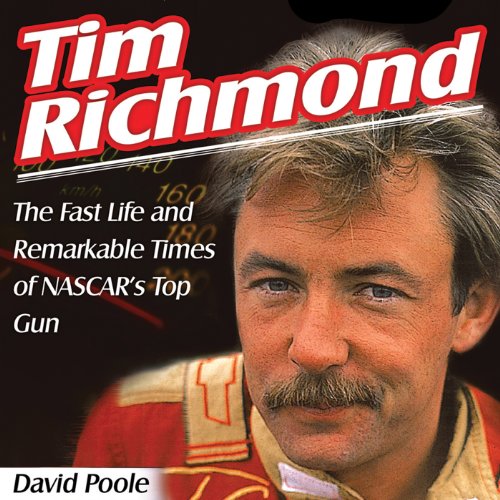 From Tim Richmond's days as a young boy racing his go-kart on his father's factory floor to his tragic and untimely death at age 34, David Poole provides an extensive, penetrating look at one of racing's legendary figures with Tim Richmond: The Fast Life and Remarkable Times of NASCAR's Top Gun.

Christine Padovan's captivating, lively delivery perfectly encapsulates Richmond's freewheeling spirit and the kinetic energy of Poole's prose. Her skillful performance makes this experience as bracing and compelling as a NASCAR race, making it difficult to pause after pressing play.

Tim Richmond was, fellow NASCAR driver Kyle Petty said, "a stranger in time." In one regard, the flashy, flamboyant driver from Ashland, Ohio, was years ahead of the trends in a sport that would soon enjoy explosive growth in popularity. Women who were NASCAR fans loved him - and so did their husbands and boyfriends.

Richmond believed he could use his stardom in racing as a springboard to a second career as an actor, and he had the Hollywood good looks to make that a realistic dream. At the same time, Richmond was also a throwback. He pushed his race cars hard, too hard at times, driving every lap like he was hauling moonshine through the mountains of the Carolinas with a revenuer on his rear bumper. Those who saw him drive still compare him to veterans like Curtis Turner and Joe Weatherly, who ran as hard off the track as they did off of it.

In the early 1980s, however, Richmond stood out. He was not from the South; he had not grown up slinging a stock car through the dirt on red-clay ovals. He had, in fact, never raced at all until he was 21. And just 10 years later, after making a splash in the Indianapolis 500 as a rookie, he was emerging as one of the brightest stars and greatest talents in NASCAR's Winston Cup Series. Richmond's star was bright, but its light went out too soon.

As he neared stock car racing's zenith, Richmond's life took a tragic turn. A man who thrived on the affection he felt from those who enjoyed watching him compete spent his final months almost completely shut off from that world. Tim Richmond: The Fast Life and Remarkable Times of NASCAR's Top Gun tells the memorable story of a born racer and how he raced headlong through life with the throttle wide open and his wheels burning rubber at almost every turn.

Some wrong info but entertaining bio

The book did seem to have some wrong info, such as Bill Elliott winning the Daytona 500 during the Sudafed fiasco. Bobby Allison won it that year. The story was lacking in some of its statements, so that was disappointing, knowing more could have been gotten regarding Mr. Richmond's colorful life.

NASCAR is mainly a guy's pastime, so I would have expected a male narrator, but Ms Padovan's lower/tomboyish voice actually pulls off narrating this story very well. And I doubt Audible's Critics review would have said such glowing praise if they truly didn't like her narration. Looks like she actually researched some of the accents for certain well known folks because she emulated their vocal styling very well.

Whoever is the narrator for this book should not ever narrate another thing. It was horrible. The book was awesome. I'm an English teacher and she pauses where she shouldn't and the sentences do not make sense. Then, she mispronounced several things and names.

Great story but the narrator was terrible, she spoke in accents which were insultingly bad. Narrator did not take time to research the correct way to pronounce people's names or certain terms that stand out to avid fans of the sport. The story is fantastic and I wish I was old enough to have watched Tim race.

This is a great book for a NASCAR or auto racing fan, but you must really be a BIG fan in order to tolerate the narration for the duration of the book. Sounds like a computer generated female voice, but worse. If you happen to be driving while listening to this book, you could easily mistake it for your navigation system and wind up completely lost.

An interesting story about a NASCAR hero that isn't talked about much. The reader of this audio book though almost ruins the story. Between here infuriating cadence and mispronouncing names and tracks I almost turned off the book if it wasn't for the good story of Tim's life.

As told by an alien

This story was interesting. The narrator has no emotion, zero pronunciation skills,and could only say four or five word sentences. Shockingly terrible judgment used in acceptance of this recording

Great story - As read by Siri!

Great story, Tims life story would make a great movie. I had to verify that the narrator was human after starting it however. She reads at the same cadence as Siri (maybe even worse), and puts the emphasis on the wrong syllables enough to make it quite annoying.

Friends who enjoy NASCAR would like this book, but absolutely HATE the narration.

Would you be willing to try another one of Christine Padovan’s performances?

Her narration was obvious she knew nothing of NASCAR or the audience of this story for that matter. Although she is very clear, she sounds like a Speak & Spell that occasionally, poorly attempts an accent.

Could you see Tim Richmond being made into a movie or a TV series? Who should the stars be?

It already has been, "Days of Thunder" took several story lines from his journey.

Feel like I should get a refund because it truly was too hard to listen to. Had to buy the book to actually enjoy it.