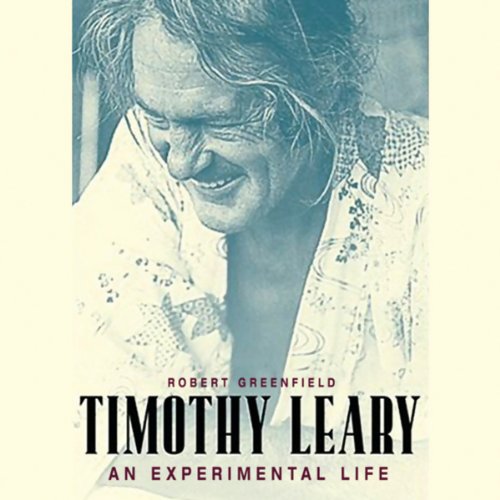 To a generation in full revolt against any form of authority, "Tune in, turn on, drop out" became a mantra, and its popularizer, Dr. Timothy Leary, a guru.

A charismatic and brilliant psychologist, Leary first became intrigued, and then obsessed, by the effects of psychedelic drugs in the 1960s while teaching at Harvard, where he not only encouraged but instituted their experimental use among students and faculty.

What began as research into human consciousness turned into a mission to alter consciousness itself. Leary transformed himself from a serious social scientist into a counterculture shaman, embodying the idealism and hedonism of an age of revolutionary change.

Timothy Leary is the first major biography of one of the most controversial figures in postwar America.

"Hugely entertaining....[A] genuine page turner, an epic tragedy and a cosmic farce." (L.A. Weekly)
"A veritable who's who of the age of Aquarius and a real page-turner....illuminates the paradoxes of the psychedelic age." (Booklist)
"Riveting....unfolds like the great novel Sinclair Lewis might have written had he lived to the age of 120." (New York Times Book Review)

If you dislike, or more to the point, don't understand someone's work, why write their biography? From his final remarks, it's obvious that Greenfield was afraid of Dr. Leary's work. He declined to actually meet the man when he had the opportunity because he was concerned he might be required to take LSD.

To the point, when Mr. Greenfield can make Dr. Leary appear inept, foolish, pompous, in error, self-serving, dishonest, or disingenuous, he slants his text in just that way. Yet in fact the writer did not know the doctor and all the writer's observations are second or third hand.

I was extremely annoyed with this huge work. I wonder who commissioned it? I STRONGLY CAUTION ANYONE WHO HAS READ LEARY'S OWN WORKS AND HAS A GOOD OPINION OF HIM not to bother with this book. You will lean nothing of value you didn't learn from FLASHBACKS, and what you will learn here is gossip, not verifiable and, frankly, not at all important.

What is important is that Timothy Leary discovered the gateway to a cure for psychosis. Using John Lilly's metaphor, Leary helped to develop a program language for the human bio-computer. Unfortunately, his work, as it continues in his native country, is clandestine. For this we can thank people with tiny minds like Mr. Greenfield.

Mr. Lawor's reading was quite respectable. Please let him know, however, that the Neoplatonist, Aleister Crowley's name rhymes with 'holy,' not 'foully.'

My problem with this biography was it's "Ho hum" attitude to what Leary was going through. There was an intentional attempt to ignore or undermine the clear importance of this man in modern American History. RUSerius did an interview with the author that I listened to and it was clear he had little appreciation for Leary and had specific problems with his parenting and alleged "snitching" to get out of jail. In fact Leary was a single dad who did pretty darn well and the problems his daughter had with paranoid schizophrenia were clearly inherited. His son did well. As for his snitching, that was calculated to do little if any harm and that's the way it turned out.

On the positive side, Leary played out a dangerous rebellion against the powers that be and did it boldly and gracefully. He was in fact a major spiritual and religious leader of the time that ha had effects we still have fathomed. Obviously the author was clueless about all that, perhpas intentionally. He was one of the radicals whose toes Leary rightfully stepped hard on.

This was a biased and intentional undermining of a hero. That said, it still was enjoyable to those he said would mostly read the book...us fans of Leary.

This was a great, unbiased look into the life of a counter culture icon. Leary struggled in personal relationships as we all do and did the best he could to deliver the message that so many of us have now received. A true philosopher, a widely misunderstood pioneer, Tim played a large role in the art and music of the free love generation.

This was an incredibly enjoyable listen both the writing and the narration kept me curious and engaged. It was wonderful to hear a truthful account of one of the most notorious figures in American counter culture lore. I loved it.

Its time to wake up world. Wonderful story of a man against society. Loved it.

The author gets in the way

People who hate Tim Leary would like this book. Through the book, the author's animosity toward and prejudice against Leary become evident. By the end it becomes clear that the author's personal encounters with Leary left the author feeling small and insignificant. This book sometimes feels like the author's attempt to get back at Leary. It was unfortunate for me as I began the book not knowing much about Leary and I just wanted to learn about his life as opposed to be caught in what sometimes reads like a self-righteous rant of an insecure and inferior mind.

This was my first exposure to Leary. He had a fascinating and unlikely life that was intriguing to glimpse into.

It is worthwhile learning about Leary, but not from Robert Greenfield.