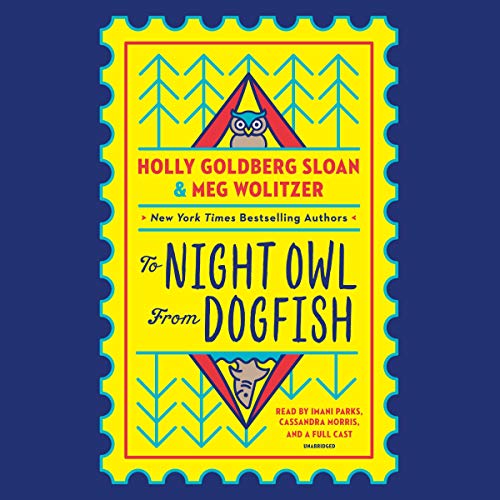 To Night Owl from Dogfish

From two extraordinary authors comes a moving, exuberant, laugh-out-loud novel about friendship and family, told entirely in emails and letters.

Avery Bloom, who's bookish, intense, and afraid of many things, particularly deep water, lives in New York City. Bett Devlin, who's fearless, outgoing, and loves all animals as well as the ocean, lives in California. What they have in common is that they are both 12 years old and are both being raised by single, gay dads.

When their dads fall in love, Bett and Avery are sent, against their will, to the same sleepaway camp. Their dads hope they will find common ground and become friends - and possibly, one day, even sisters.

But things soon go off the rails for the girls (and for their dads, too), and they find themselves on a summer adventure that neither of them could have predicted. Now that they can't imagine life without each other, will the two girls (who sometimes call themselves Night Owl and Dogfish) figure out a way to be a family?

An Amazon Best Book of the Month for February 2019

A Publishers Weekly Most Anticipated Children's Book of 2019

"Built on a foundation of absurdity, coincidence, and the occasional rather good one-liner, the novel manages the difficult balancing act of using increasingly ridiculous, and often funny, situations to drill home the idea that every close relationship takes hard work, particularly when things start going south." (The New York Times)

"This is a convincing and heartwarming look into the experiences of female friendship.... An imaginative and compelling middle-grade novel depicting modern friendships and modern families." (School Library Journal, starred review)

“Written entirely in emails and letters, this laugh-out-loud novel showcases the collaborative skills of best-selling authors Sloan (Short) and Wolitzer (Bellzhar).... Featuring a dramatic climax and a host of surprising twists, the novel affirms that families conventional and unconventional are families just the same.” (Publishers Weekly)

This is a quick listen that is sweet and funny. I thought it was totally charming. I’ve been listening to some dark true crime, and this was just the listen to lighten things up for me.

One of the things I loved about this book is that it tells readers that every family is different... and not one is perfect. Avery and Bett are such lovable characters and their story is sweet and heartwarming. The Audible version of this is told very well with a wide cast of narrators which makes it very entertaining. Highly recommend this!!

The first hour or so was rather annoying because of the continual, "Re, re..." to refer to the subject matter in the emails. But, get through that and what a delightfully fun novel!

The narrators are the perfect "tween" girls and I love that they're so different, yet so good for one another. Avery's neuroses are spot-on and Bett's fearlessness is the girl I always wanted to be. And, the supporting cast is marvelous - Bahni Turpin, Sullivan Jones - two of my favorites.

No matter how old you are, you will find something you can relate to in this story. I’m almost 30 and I absolutely loved it. The story and the cast were brilliant. I highly recommend it!

I have not enjoyed a book as much as this in quite awhile. but the readers brought it alive and so believable. WELL DONE!

this book is written in email and letter format, which I thought might be difficult to understand through audiobook, but it turns out that it was much more fun to listen to than to just read. I enjoyed hearing the different perspectives of each character as they saw the events unfold, and it was unlike any other book I've read. Hearing the different characters' voices helped a lot, and the performances of the voice actors were incredible! I highly recommend this book to kids 10 and up and adults. As a middle school teacher, I will be recommending this book to lots of kids. the fact that the two main characters have gay dads makes the book current and relevant, but isn't too political, and I don't imagine anyone would have any negative opinions of the way the authors' present homosexuality. The book does not have any adult themes that would be uncomfortable for young readers.

Entertaining, with some issues.

I like the idea of this book as a modern epistolary novel, but the execution is mixed. Overall, it’s entertaining and fun to follow along.

However, I’m not convinced the authors really get the psyches/voices of kids this age, and there’s some stereotyping going on.

Most of the voice actors are very good, but, unfortunately, the actor who plays Bett is very one-note in her delivery that it detracts from the story. She never has any variation in Bett’s cynical, semi-harsh tone that it lacks veracity.

The Audible was so good. I really enjoyed everything about this book. Even the repetitive Re re re re.
Enjoyed it so much I bought the book and CD audio for my 13year old grand daughter. I hope she likes it as much as I do.
Don't miss out on this one.