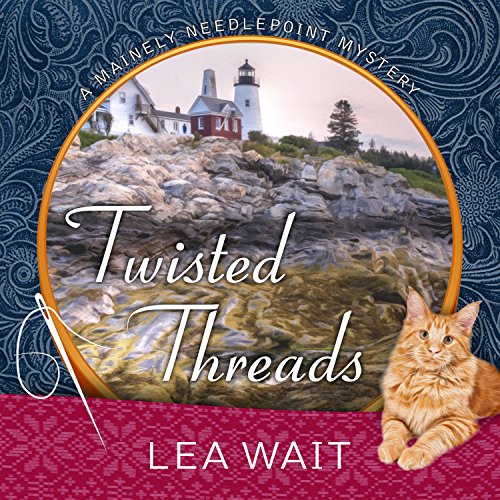 After leaving a decade ago, Angie Curtis has been called back to Harbor Haven, Maine, by her grandmother, Charlotte, who raised her following her mother's disappearance when she was a child. Her mother has been found, and now the question of her whereabouts has sadly become the mystery of her murder. The bright spot in Angie's homecoming is reuniting with Charlotte, who has started her own needlepointing business with a group called the Mainely Needlepointers.

But when a shady business associate of the stitchers dies suddenly under suspicious circumstances, Charlotte and Angie become suspects. As Angie starts to weave together clues, she discovers that this new murder may have ties to her own mother's cold case.

"A cozy debut that hits all the sweet spots: small town, family ties, and a crew of intriguing personalities." ( Library Journal)

What a wonderful start to Lea Wait's new series . It is a great story and nicely narrated . Anyone who is a Maine fan and mystery fan will love this little treasure . Lea writes such wonderful characters you end up feeling like you know them at the end of the book.

This is a Cozy Mystery in the Strictest Definition

If you are a Christian, the first thing you need to know is that the Reverend has a Ouija Board collection!

This book may qualify as a Cozy because it does not have gore and language but that is the only way. The book starts out dark with the lead character’s mother’s body being found after 19 years and never lightens up. I chose the book based on the title, thinking that it was about a group of crafters, it is actually about a crafting business gone wrong. There is also a meth lab.

I was looking for a new cozy series, this was not it.

Realistic but Not Cozy

I usually love books about my home state of Maine but I was expecting a cozy rather than a realistic mystery. While there was no profanity or sex scenes, the plot did involve sexual abuse of children - not too graphic but still disturbing.

The author created realistic Maine characters with one exception; although many Mainers are reserved most are friendly with a dry sense of humor. Unfortunately there were no lighter or warm moments to balance the depressing parts.

I did enjoy the strong females characters, notably Angie and her spunky 65 year old grandmother. And the history of Maine and needle-point was interesting.

The publisher's blurb wasn't too bad, but since Angie had had reason to escape her home town immediately after high school, she really wasn't thrilled about having to go back. The fact that her mother's body had been found after nearly twenty years did provide some comfort that mom had not deserted her. But a bullet to the brain and the suspect being dead is hardly a positive outcome. Then there is the fact that her gran had begun a cottage business beneficial to several town members but had been fleeced by the buying agent meant that she had to stay and help. Until the man was murdered in their home. There is lots more to this twisty mystery, but no spoilers here. At the beginning of each chapter is a quote from handiwork completed in early Maine history. The characters are engaging and well done.
I got this as Whispersync on the cheap advertised in Book Gorilla.
Christina Delaine provided excellent narration.

Neither the plot nor the characters can salvage this sorry story. Compounding those negatives is the awful narrator. She doesn't have a Maine or New England accent but instead seems to have a weird Southern accent. After 3 chapters this book is being returned.

This is a well written and complex cozy mystery with engaging characters. The story flows at a nice pace and includes several twists and turns. I look forward to reading the next story.

I really loved everything about Twisted Threads. The story grabbed my interest from the first chapter and held it until the very end. The narration was excellent and I look forward to getting the next book in the series.

Very good but disliked The Ouija board

I really like the story and the performance but I was disappointed with the Ouija board part. I almost stopped reading it. I’m hoping there is no occult in the other books.