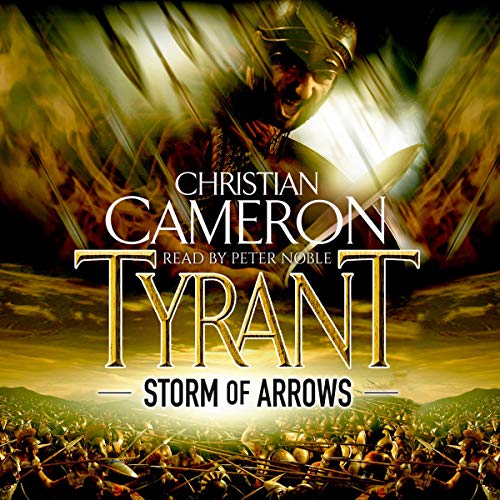 Kineas, the Athenian cavalry commander, has come a long way since being dismissed from the army of Alexander and vengefully exiled by his own city. Together, his mercenary force and their Scythian allies have defeated a mighty Macedonian army at the Ford of the River God, and his adopted city of Olbia is now free once more. But his destiny will not allow him to enjoy the fruits of victory for long. Far to the east, at the farthest edge of the Sea of Grass, Alexander is threatening to crush the Scythian hordes once and for all.

The Lady Srayanka of the Cruel Hands, the Scythian warrior-princess who spurned a king's love to be at Kineas' side, is pledged to take her tribe east to help stop 'the monster' - and Kineas knows he has no choice but to follow, even if it means embracing the violent death in battle that he has seen prefigured in countless dreams.

But long before he can confront the might of Alexander's army alongside his beloved Srayanka, he must undertake an epic journey of breathtaking daring....

Enjoyable, with a few annoyances.

As always, this narrator is great. The story is pretty good and I'm a fan of this author. My only criticism is DREAM SEQUENCES. For the love of the gods, enough with the dream sequences. Probably would have knocked an hour off this audio book to cut out the erroneous rambling dream sequences...

The 1st book was Great!

The 2nd was pretty repetitive.... Getting ready to fight a battle and fighting a battle, then getting ready to fight another battle and fighting another battle. Always coming within an inch of death and then kicking butt. On one hand he was a great Warrior, one of the greatest ! ! but he was far too forgiving far too soft ! :-( really unbelievable...

good, but not as good as others

not as good as some of his others. Reoccurring dream sequence gets a bit much

Its as if the narrator was made for this story, perfect match. An excellent series if you are into historical fiction.

Only my third Cameron book. Peter Noble is on point as usual and brings the story to life. I know I will listen again. I have become a big fan of historical novels. Entertaining to the max. Christian Cameron is a great writer and entrusting his work to Peter Noble makes for a can’t lose combination.