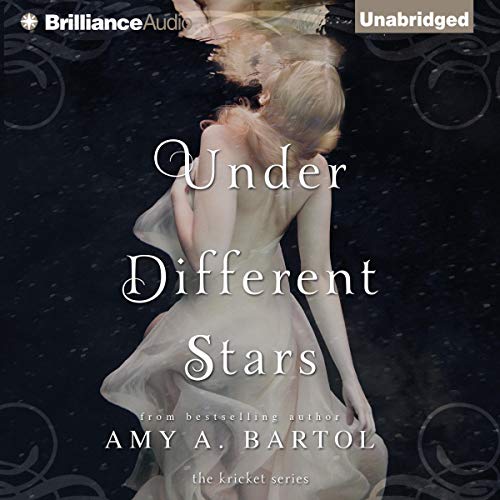 Kricket Hollowell never wished upon stars. She was too busy hiding in plain sight, eluding Chicago's foster care system. As her eighteenth birthday approaches, she now eagerly anticipates the day she'll stop running and finally find her place in the world.

That day comes when she meets a young Etharian soldier named Trey Allairis, who has been charged with coming to Earth to find Kricket and transport her to her true home. As danger draws close, he must protect her until she can wield the powers she cannot use on Earth... and he soon realizes that counting a galaxy of stars would be easier than losing this extraordinary girl.

Kyon Ensin knows the powerful depths of Kricket's gifts - gifts he'll control when he takes her for his tribe and leads the forces that will claim Ethar and destroy his enemies, starting with Trey Allairis. Now, Kricket faces the most difficult choice of her life: whether to wage a battle for survival, or a fight for love.

Umm, your participles are dangling...

Short version: Different Stars is a sci-fi wannabe Blood and Chocolate (the werewolf one) with endless -ing phrases. The poor grammar has ruined the book for me, and I can't finish it.

Listen to the preview before you get this book!

Reading this book is like volunteering for torture. Having worked as a composition teacher, I am completely distracted by the repetitive sentence structure. Writing this paragraph, I am mimicking the style of the book. Reading this book, English grammar seems to have failed (sic).

I've made it about 3 chapters in, and I just can't bear it any more. What began as an interesting introduction to an intriguing character soon devolved into a trite and stereotypical YA romance where the Handsome Jerk male antagonist is obviously going to become the Tortured Beloved despite his better judgement, etc, etc, and the heroine will be struggling mightily against her undeniable physical attraction to the beautiful jerk.

Sure, fine, whatever, I even enjoy that sort of thing in the occasional book. When it's well done. But the participles! The repetitive sentence pattern distracts from the story. I find myself listening to see how many participles it takes until another one dangles ("Moistening my lips, my heart pounds in my chest as I slowly trail my eyes over the massive form in front of me"--so, she moistens her lips with her heart?) This book has 4 1/2 stars, which speaks well for the story, but I just can't suffer through the style to get to the narrative.

Also, the age difference between the main characters (17-year-old girl with 25-year-old man) creeps me out. If they were 27 and 35, I wouldn't have a problem with it, but there is a lot more life experience between 17 and 25 than there is between 27 and 35.

So, friends, if you notice shoddy grammar and editing, you might want to skip this book. If you don't notice grammar, and you enjoy overwrought YA, go for it.

I really enjoyed the worldbuilding that Bartol did in regards to the setting (I desperately want to know more about Ethar). And despite some of my frustrations, I plan on continuing with the series. The writing is decent, and the story can be intriguing.

With that said, there are two things that really bugged me about this book: 1) the romance, and 2) the tropes (specifically the ones that involve rapey dudes and overpowered female protagonists).

The romance was eyerollingly bad at times. It was very much like reading non-sexual purple prose. The romance felt forced (and perhaps it was, seeing as Kricket seems to have influence as a priestess). All the men seem to fall head over heals for Kricket, and it is very annoying. I would appreciate if Bartol could find a better way to advance the romantic plot. Also, Kricket hates most of the romantic suitors, and most of them are physically abusive and claim ownership over her.

I really disliked how stepping into this entirely new world Kricket was simultaneously exposed to leaps in technology and giant steps backwards for feminism. I just can't help but wonder what would have happened if Bartol would have been a bit more creative with the story's obstacles. The plot was overly-narcissistic with its main protaganist, Kricket. Barton has this big, beautiful world ready to explore, and instead the plot becomes so singularly focused on a ho-hum romance that it loses me as a reader. Kricket is said over and over again to be a perfect beauty, incredibly intelligent, able to (snarkily) hold conversation, etc, etc. Kricket is too perfect and it kills me a bit. An unflawed protagonist is a HUGE flaw for me in any story.

This book honestly comes across as some fourteen year old girl's romantic daydream, and that may be fine for some people, but for me I really insist on more from my books.

YA books are always a gamble. I lost on this one.

STORY (YA sci-fi romance) - Some YA books are among my very, very favorites (Hunger Games, The Selection, Contours of the Heart). Others, not so much. This book won multiple awards, but I don't really get it. Kricket lives on Earth, but she's not exactly human. Trey comes to rescue her and take her home, but so do some bad guys. There's conflict and romance, as you might expect. The concept, the characters, the setting were all good enough. I can't really put my finger on what was lacking, but the book was just okay IMHO. I know I'm way too old for the target audience, but so many books listed as YA are awesome. This isn't one of them.

OVERALL - No sex, cussing or graphic violence. I'd recommend this for females up to the age of about 20 who enjoy futuristic romances. Parents must be okay with making out and some mild sexual references. NOT recommended for adults, even if you like YA. This is Book 1 of the series and it can stand alone, though the ending was left open for much more to come. I don't plan to continue the series, however.

Had some promise but dragged on and on to finally get to the planet. I thought the Narrators voice was absolutely a poor choice and big mistake. She was way too mature in tone for a character this young and youthful in attitude. It ruined it. An example of a perfect match would be in Matched or Delirium. All the names of the various male characters were very confusing. The dialogue was juvenile and silly, starting with Enrique. This negatively affected the credibility of the story. I got a kick out of the idealizing of Cricket and several other men's beauty, although repetitive. The emphasis on clothing style and choices was perfect for adolescent girls, I suppose, but kind of ridiculous coming from a 35 year old sounding female character. I am more looking forward to the reviews of this book, then to the second book in the series. I hope to have a few laughs.

Not as good as the premonition series.

I had just finished reading the premonition series and was dying for something to fill the void of waiting for the next book in that series. I saw other reviews saying that this was just as good, but I disagree. I've listened to the first two books and still not loving it. The main character is too naive. Of course, every guy in the book is instantly in love with her and she unquestionably accepts the extremely strange things being told to her. (There was a bit of this in premonition, but not nearly as bad.) I didn't form any attachment to the characters. Part of that was lack of build up to the relationships, and part of that was the narrator. She made the three main guys who were supposed to be gorgeous sound like dummies. I kept picturing the three stooges in my head and couldn't take it seriously. There were also a lot of things that just didn't make sense in the earth-like world. (They have built-in translators so that it sounds like other languages are on the one they know, but then sometimes there are words they keep explaining the translation of - like hour, day, day of week. why? They have clothes similar to ours, but are amazed by a bra and underwear...; Supposedly this other world is much better at taking care of their world than humans, but all descriptions sound just as wasteful and disruptive to the planet; they make fun of her for not knowing that their anatomy is so different than humans, but seem exactly the same except placement of heart? of course sex works just fine between the species; She does understand how things on their world work, but can bluff through an interrogation about a fake marriage ceremony, etc) I can't take it. Could barely make it through the second book and won't be getting the third when it comes out. Should probably mention that I'm 37, so maybe that's part of the problem. This book is for a younger group, but 11-13 seems very young for some of the subject matter in this series!

This is the first time I have read Amy Bartol and I am super impressed! Look out Amanda Hocking, Cassandra Clare & Stephanie Meyer!!!

I am immersed in this brand new, unique world that Amy has created!!!

The narrator is just a pleasure to listen to!!!

Would you consider the audio edition of Under Different Stars to be better than the print version?

The narrator's voice get a bit distracting in places with the way she pronounces the words. After getting used to the way she reads, it really wasn't that big of a deal.

The way the author describes the worlds in this book transports you there so completely. I felt like I could reach out and touch the images described. I was completely enraptured.

I wanted to listen to this book all day long! I listen to books while I work to keep me from being distracted by the outside world but this book transported me to another world entirely. I could barely hit the pause button.

I have never written a review of a book before so you have to understand just how much I loved this book. I list to about a book or two a week while working or commuting to and from work and this book got to me. Not many books get to me and really make me hunger for them but this one did. Loved it!

This book was so very good. I was actually kind of surprised because usually aliens aren't my thing, but this one was extremely unexpected and worth the money or credit. It's awesome

Stop me if you recognize this plot - tall, too skinny, big eyed and beautiful female protagonist (she doesn’t think she is beautiful, but everyone thinks she is drop-dead gorgeous) meets another tall and oh-so-beautiful bad boy that she shouldn’t even like but actually loves at first sight….blah, blah, blah.
Despite the cookie-cutter plot of this book I still found the overall story to be enjoyable. . Maybe it was just the right book at the right time but I will most likely listen to the 2nd book in the series.

A new and original story of two different worlds, an orphan of one world left on earth only to be kidnapped and brought back to her real home. Good romantic side story as well.