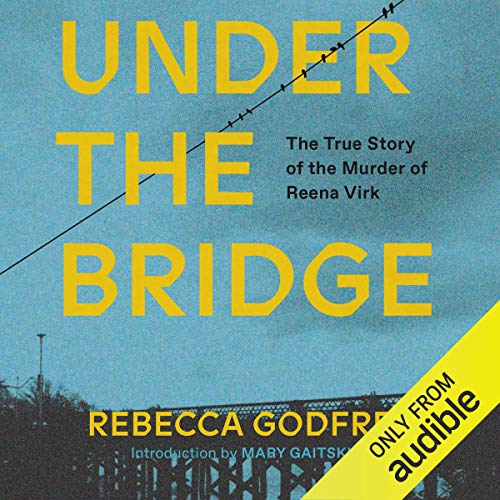 “A swift, harrowing classic perfect for these unnerving times.” (Jenny Offill, author of Dept. of Speculation)

One moonlit night, 14-year-old Reena Virk went to join friends at a party and never returned home. In this “tour de force of crime reportage” (Kirkus Reviews), acclaimed author Rebecca Godfrey takes us into the hidden world of the seven teenage girls - and boy - accused of a savage murder. As she follows the investigation and trials, Godfrey reveals the startling truth about the unlikely killers. Laced with lyricism and insight, Under the Bridge is an unforgettable look at a haunting modern tragedy.

"With a gripping journalistic style, novelist Godfrey (The Torn Skirt) recounts the story behind a horrific murder in a small British Columbia town. One November night in 1997, 14-year-old Reena Virk was savagely beaten and drowned under a waterway bridge. From a small East Indian community, Reena was alienated from her family and spent her time desperately trying to find a place with a tough crowd of teenagers, several of whom had been in trouble with the law. But one of the girls held a grudge against her, and Reena apparently was lured to her violent end by a promise of friendship. Seven girls and one boy initially were charged with assault. Two were convicted of murder: Warren Glowatski, now serving a life sentence, and Kelly Ellard, who was found guilty in 2005 after three trials. Godfrey is careful not to make judgments, but her informed writing reveals a remorseful Warren, an unrepentant Kelly (who denies her guilt) and other psychologically damaged members of the group, sharply etched, whose casual brutality, enabled by drug use, led to a brutal and senseless death. Godfrey's account contains some recreated dialogue but overall is meticulously researched and harrowing to read." -- Publishers' Weekly

"Godfrey approaches a brutal crime in an unlikely spot the way a novelist would, by tracing, first of all, how the victim and persecutors came to be in that place, through all the tangled byroads of families seeking a better life. In November 1997, the body of a 14-year-old girl, whose family had emigrated from India, was found in the waters off Victoria Island in British Columbia. The victim, Reena Virk, had been beaten to death. Seven girls and one boy, all high-schoolers, were charged with the crime. Godfrey follows the case from discovery through verdict at trial, seeking to answer the one question the trial testimony could not: Why did a gang of mostly well-off teens commit casual murder? Her interviews with all the principals, ranging from the police scuba team that found the body through prosecution and defense attorneys, suburban families, teachers, and the accused themselves, bring this case disturbingly alive." -- Connie Fletcher, Booklist

this author is so good I have read so many true stories that at the end of book I would have to look up to see what happened to them after. This book gives all before during and now a must read for anyone who likes true stories

This true story was riveting to me from beginning to end and it tells about the life and murder of Reena Virk, a 14-year-old British Columbia girl wanting to fit in with the “in crowd” but instead being swarmed and beaten by seven other girls and one boy on a horrific Friday night when they were simply hanging out near their school after hours. Earlier, police had broken up the “partying” after a window was broken so the young teens moved on near a dark bridge where pack mentality suddenly erupted and Reena was viciously attacked. Eventually, she staggered to the other side of the bridge in an attempt to get away but two of the eight youths followed her: 3 went over the bridge but only 2 came back. This thorough book reveals details about each participant in the crime and about the investigation which followed, the court trials and outcomes...but the stories are delivered in human interest fashion and not just as a chronology of facts. Rebecca Godfrey’s writing is stunning and the tragedy for all involved is/was profound. (As an aside here, the chapter including Warren’s girlfriend Syreeta being interrogated by Sgt. Bond has been evaluated as a textbook example for excellent police procedure to elicit information from a reluctant friend.) Finally, I would like to express my appreciation for the talented narration given by this audio book’s spoken performance artist, Erin Moon. Her ability to speak in female and male voices both youthful and adult is exemplary. I recommend this book highly.

At Chapter 2 I quit listening. The narrator's voice was harsh and difficult to listen to. The story appeared to be another of the poor misunderstood kids who make bad choices after being ignored or mistreated by their parents. Someone is murdered and we are encouraged to be kind in our thoughts about the killers. This theme is beginning to wear. I probably would have continued if the voice of the narrator weren't so irritating.

A little rambling but good story

Really a good story but rambles on and repeats in several sections. I had the urge to skip some parts but stuck with it. Overall I'd recommend.

What could have been an interesting deep-dive into class politics in a British Columbian town and how they resulted in a violent murder is completely derailed by the author's horrifying narration, which includes numerous, lengthy and HIGHLY racist/grating attempts at an exaggerated Indian accent. It is honestly appalling that they let the white narrator do this in 2020, especially when she's giving voice to the relatives of a murdered girl! When I wasn't gasping in shock at this caricature of an Indian person's voice I almost had to laugh--it completely undermines the seriousness of the story. Speaking of exaggerated caricatures, the author drips with disdain for her teenaged cast of characters, giving them ridiculous, shrill, valley girl affects that imply they're downright stupid. I have to wonder why this author always chooses to write about adolescents when she clearly thinks they are beneath serious consideration as individuals. Maybe this is one you should read on paper (or, honestly, just avoid.)