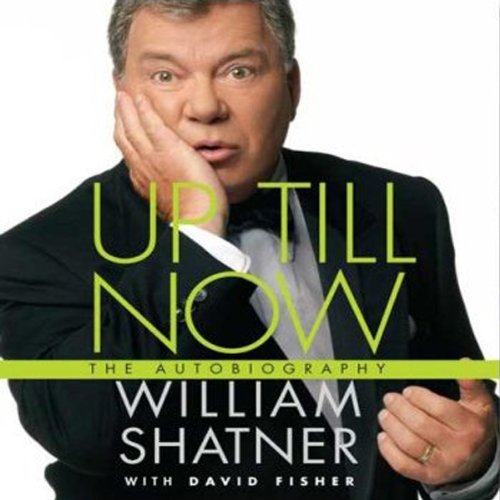 After almost 60 years as an actor, William Shatner has become one of the most beloved entertainers in the world. It seems that Shatner is everywhere. Winning an Emmy for his role on Boston Legal. Doing commercials for Priceline.com. In movie theaters. Singing with Ben Folds. He sits next to Jay Leno and Jimmy Kimmel, and he's practically a regular on Howard Stern's show. And he was recently elected to the Academy of Television Arts & Sciences Hall of Fame. In Up Till Now, Shatner offers listeners the remarkable, full story of his life and explains how he got to be, well, everywhere.

It was the original Star Trek series, and later its films, that made Shatner instantly recognizable and called by name (or at least by Captain Kirk's name) across the globe. But Shatner neither began nor has ended his career with that role. From the very start, he took his skills as an actor and put them to use wherever he could. He straddled the classic world of the theater and the new world of television, whether stepping in for Christopher Plummer in Shakespeare's Henry V or staring at "something on the wing" in a classic Twilight Zone episode. And since then, he's gone on to star in numerous successful shows, such as T. J. Hooker, Rescue 911, and most recently Boston Legal.

William Shatner has always been willing to take risks for his art. Who else would share the screen with thousands of tarantulas, release an album called Has Been, or film a racially incendiary film in the Deep South during the height of the civil-rights era? And who else would willingly paramotor into a field of waiting fans armed with paintball guns, all waiting for a chance to stun Captain...er, Shatner?

In this touching and very funny autobiography, William Shatner reveals the man behind these unforgettable moments, and explains how he's become the worldwide star and experienced actor he is today.

"It is now Bill Shatner's universe - we just live in it." ( New York Daily News)

I found this audio book to be very interesting and funny.
William Shatner was very to listen to on a long commute.
I also was impressed that it was not a "tell all book" that made other people look bad. Shatner is also honest about his own mistakes. I did not realize how long a career he has had in entertaining.

I knew that listening to this book would make me laugh, especially since William Shatner is the narrator. He delivers his story with great humor as well as warmth and a sense that he is just chatting with you; while listening in the car I sometimes expected to see him sitting next to me in the passenger seat! The book was very funny, as expected, but also touching. Shatner is very poignant, and covers a lot of ground in this book. A very worthwhile listen!

Shatner is at his best. He is a great storyteller. It was like sitting out on the balcony and just enjoying some memories and stories with an old friend. I found it to be hilarious, entertaining, and moving. He has a really great way of looking at life. I did however find the audio quality lacking.

I am really glad I got this audiobook.

This is a good quality autobiography that shares a very real person and his very real life.

I really like the style and sincerity of his presentation. It has the feel of lounging around with a real good close friend and talking for hours, mind you he does all the talking.
The listening feels both comfortable and intimate.

Definately worth getting to know him a little here in this audiobook. You'll really like the person you meet. Even his little shameless promotions will leave a smile.

If you can, listen to the audio version. Listening to Bill narrate his own book truly gets across his wry humour and self deprecating stories.
One of the few audio books I've listened to multiple times. Brilliant.

This book is a great story from the opening to the last word. It not only shortened my commute considerably but it brought me to work smiling. It is not a book about Star Trek but a book about life. A truly interesting life of someone who has seen the evolution of entertainment and has tried all channels to be creative. It is a great read and like the others who have posted so far a 5 out of 5.

What a grand journey through Bill's life! Having interviewed him once for a horse magazine, I thought he was rather pompous....now I regret all the years I thought that and wish I had spent more time with this brilliant and unique American icon of nearly every venue available to the artist! A great trip!

Not about Capt. James T. Kirk but a great book

I am a William Shatner fan, so I loved the book. Star Trek plays a small part in his biography but a big part in his life. I liked the honest look at his struggles and the joys he has found along the way. His work ethic alone is worth reading about. Thanks Mr. Shatner for giving us a detailed look into your life, both the triumphs and tragedies.

Shatner at his best!

What a fun read! As a Star Trek fan and a huge fan of Boston Legal, I already liked William Shatner's dry sense of humor. He reads his book as he should, like he is telling a story, his story. It is fun to listen to and quite interesting. Perfect for a cross country plane trip!

Not for Star Trek fans only

Great to "read" as an audio book, since Shatner does the reading himself. The first half was particularly interesting, as this accomplished actor describes the lesser known early years of his career. Sprinkled with very funny parts and also great personal tragedy, the book is worth reading, even if you are not a huge Star Trek fan.