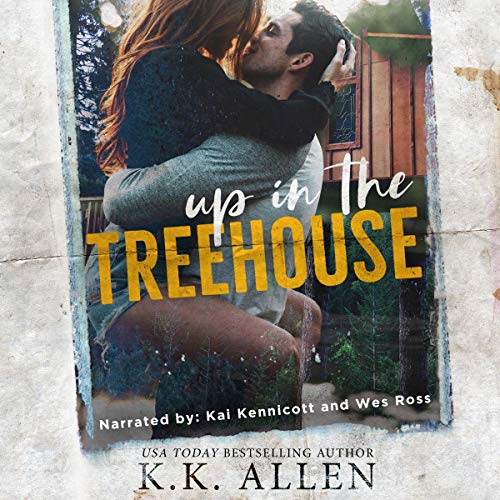 Up in the Treehouse

Chloe Rivers never thought she would keep secrets from her best friend. Then again, she never imagined she would fall in love with him either. When she finally reveals her feelings, rejection shatters her, rendering her vulnerable and sending her straight into the destructive arms of the wrong guy.

Gavin Rhodes never saw the betrayal coming. It crushes him. Chloe has always been his forbidden fantasy; sweet, tempting, and beautiful. But when the opportunity finally presents itself, he makes the biggest mistake of all and denies her.

Four years after a devastating tragedy, Chloe and Gavin's worlds collide and they find their lives entangling once again. Haunted by the past, they are forced to come to terms with all that has transpired to find the peace they deserve. Except they can't seem to get near each other without combatting an intense emotional connection that brings them right back to where it all started, their childhood treehouse.

Chloe still holds her secrets close, but this time she isn't the only one with something to hide. Can their deep-rooted connection survive the destruction of innocence?

Ce que les auditeurs disent de Up in the Treehouse

Excellent story! I didn't want it to end!

What made the experience of listening to Up in the Treehouse the most enjoyable?

The way the author writes is so poetically beautiful

K.K. Allen is a new to me author. This is her first new adult romances and I hope it won’t be her last! I went into it fairly blind. I had read the blurb and it sounded good, but nothing could have prepared me for how it would suck me in so much that I listened to almost the entire book in one sitting! Had it not been for a low battery on my kindle, I probably would have! Up in the Treehouse tells the story of 3 best friends growing up together. They meet when they are 12 and as they grow, so do their relationships. Feelings of friendship change to lust and love, personalities change as they enter high school and move into adulthood. Their whole dynamic is threatened when two of them start dating. Tragedy strikes and changes things forever. That’s the before. Then comes the after. The book jumps back and forth from past to present throughout the story to get a full understanding of the emotions and thoughts of the characters. It has more angst than I’ve seen in a long time, but I loved it!! There was so much misunderstanding between characters that could have prevented a lot of heartache. I wanted to smack them upside the head several times, but hey, that’s how it happens in real life. The heart works in a unique way and your head rarely gets a say in it! Underneath all the angst and the story of love and friendship, is a greater message. Up in the Treehouse actually is a huge part of the book, not just the title. The deeper message in there is to celebrate “Hero’s and Legends” who stand up to and overcome bullies. It’s a wonderful theme that is really powerfully presented and even though it’s a main part of the book, it’s not thrown at you in an uncomfortable way, but rather inspiring and leaving you in awe. I really loved this book and I look forward to more from K.K Allen!

Up in the Treehouse

Very entertaining and enjoyable second chance at love story. The story is told in the present as well as through flashbacks to the past. It did take a bit for me to really get into the story though. Not sure why. I really liked the story and it is one I will definitely listen to more than once.

Love the comparisons/metaphor between life and the branches of the tree.

Love, betrayal, romance, guilt, heartache, friendship, bullying, secrets and so much more is woven into this story.

So glad that the "big secret" Gavin was keeping didn't turn out the way I thought it was going to.

This is my first K.K. Allen book, I need to check out the rest of her stories.

Anne James did a really good job with the narration. Pleasant voice. Easy on the ears. Good character voices. She was able to bring the characters to life an make you feel all their emotions through her narration. Very enjoyable

Even though the narration for this book was very enjoyable Dual narration would have been great.

I was voluntarily provided this free review copy audiobook by the author, narrator or publisher.

This audio was just stupid sweet and charming. Chloe and Gavin experience soul crushing betrayal, misunderstandings and secrets causing a rift as wide as a raging river.

4 years later they are forced back into each other's lives but can't seem to be able to get themselves on the right path.

This book is full of push and pull and frustration and sweet, intense moments. I loved it and with as well received as the book was... I can imagine it's only a matter of time before this audio is just as well received.

Anne James completely slays the narration. She is perfection for the story, with the correct tone and inflections for the age and character. Perfect!

Would you consider the audio edition of Up in the Treehouse to be better than the print version?

I am, at heart, a lover of print, but I really enjoyed listening to this during car rides!

I really love Gavin, he was easy to fall in love with. Also, Monica. I'd love to spend more time with her!

She did a wonderful job giving each character a unique voice.

Yes. I sat in the car, quite a few times, to finish out a section of the story.

First off, I was really super excited to get my hands on an ARC of this book! I loved The Summer Solstice series, & the short story that Ms. Allen wrote, so I was already on board to read anything else she writes.

I'm just as in love with Chloe, Gavin, & all their friends, as am with their young adult predecessors. "Up in the Treehouse" is a departure from young adult fantasy, as it is a New Adult romance. (For those who don't know, New Adult is geared more towards twenty-somethings, with more adult themes, language, & situations)

I loved the relationship between the two main characters. It has that familiar "will they/won't they?" thing going on, but minus the frustration that I normally feel with book characters (where the writer just seems to be creating conflict for the heck of it, instead of furthering plots). These characters felt real. They make both good and bad decisions, in a very humanly relatable way. I saw bits of myself on those pages, bits of my own relationship, bits of people I know. Instead of making me want to toss the book in frustration, it made me think: What would I have done in those characters shoes?

Bravo, Ms. Allen, for making these characters so real.

I quite enjoyed the narrator, as well. She gave each character their own unique voice. Well done!

This book deals with bullying, portraying both the victims & the bullies themselves as human beings that have made choices that lead to what they were, & what they'd become.

As this is a NA, and NOT YA , there is a certain amount of language & sex (though it's not overly graphic)

I thought the narration was just perfect in this story and not only the story line but the narrator had me sitting in my car longer than I needed to be after I arrived at my destination.

This is such a sweet story that had me with all the feels from the first chapter. I found myself laughing out loud, crying and sighing in bitter frustration through this book. Definitely one of the best reads/listens of the year.

Still have a lump in my throat

I absolutely adore this book. Between the characters, the emotion, and the whole concept of telling the story like branches on a tree, I just can't get enough.

This can easily transition from new adult to contemporary romance so it reaches a broad audience. The author definitely struck a chord with me and the narrator performed wonderfully. Incidentally I just moved to the West Coast and happened to move to a town adjacent to Bonney Lake. The accuracy of the references nearby made it that much more enjoyable. I've tagged this author as someone to keep my eye on.

This audiobook was gifted to me by the publisher, narrator, or author.

I really liked this book. the narrator had a wonderful voice you all need to listen to it to see how great this book is
I received this book from the publisher, author and or narrator for a honest review and unbiased options via audio book boom dot com

This was my first KK Allen story and it has me hooked. The narration brought all of the angst and emotion to life and had me invested in Gavin and Chloe's story as if it was my own.

I love this book!!! I love the characters. I love the plot. I love the message about bullying. This story has all the feels. It doesn’t matter if it’s unrealistic, that’s why it’s fiction. That is what makes it entertaining. It is how readers escape from reality. And I absolutely loved escaping into Chloe and Gavin’s world. 💜📖

I decided to go through and listen to my whole library again. When I got to this book, I kind of wanted to skip it. Not because it wasn't a great book because it was wonderful. It's just so heavy. There are so many things that happen in this book that make you just want to cry, scream in frustration and laugh. The characters go through so much pain before the end of the story. It's heart breaking. The very end of the story however was wonderful. I'd like to see a second book to this.