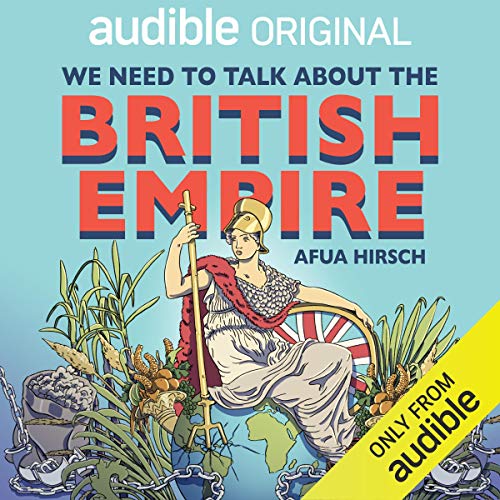 We Need to Talk About the British Empire

Making sense of the British Empire's legacy... through the stories of people who lived through it.

Through six intimate conversations with a new generation of writers and historians - journalist Afua Hirsch tries to break through old cliches, and unpick the true legacy of this complicated and difficult inheritance.

She speaks to leading figures in British culture today - from poet Benjamin Zephaniah to actress Diana Rigg, broadcaster Anita Rani to novelist Nadifa Mohamed - discovering vivid family stories of the people who made the Empire what it was. And she hears how its ripples continue to shape our lives, and sense of collective identity today: our attitudes and cultural values, the multicultural, multiracial population of the British Isles today, and the relationships that Britain has with other parts of the world.

A Somethin’ Else Production.

This is an Audible Original Podcast. Free for members. You can download all 6 episodes to your Library now.

There are many reviewers claiming the podcast is “biased” and “unbalanced”. There are two problems with these takes: 1. Everyone and everything is biased in some way. It is impossible for humans to be unbiased. We can only aim to be as fair as possible depending on the context. Given that mainstream British society has traditionally romanticised empire, it is only fair that Hirsch offers a different perspective. 2. What these reviewers fail to understand is Hirsch is explicit in saying that this podcast will be examining empire from the perspectives of those who were colonised. She never claims to be offering a “balanced” perspective. It’s like complaining about buying a jar of marmite and being upset that it’s not Nutella. Personally, I loved the series. Hirsch’s interviewees give their personal perspectives, which are juxtaposed with historians providing context. The voices of the colonised are front and center (aside from Diana Riggs episode which Hirsch handles diplomatically). She consistently comes back to the podcasts central questions: how do these individuals grapple with differing narratives of empire and how should these narratives be handled today? You will only deepen your perspective by listening to this richly informative series.

Listened to all the episodes in a row. Very informative but shocking. This is all new information to me.

Makes me wish I knew more about my history

I listened to this and realized that I was taught colonial history. I never made it a priority to understand the world from different perspectives. Well put together and very relatable.

I highly recommend sharing this series with your friends and family. A step towards global compassion and understanding. A step away from ignorance and racism. Well done.

It's A Mixed Bag

Some of the stories are good and some are not same with the people interviewed.

Excellent personal stories that have been buried by both time as well as the potential shame if the people involved. As a student of history I am ashamed to say I didn't know that some of these things happened. Educate yourself and have a listen with an open mind.

We'll balanced and provides a diversity of experiences and topics from the four corners of empire.

Such an engaging and informative podcast, telling the story of the British Empire through the lived experience of those that were colonised and the colonisers. The podcast also highlights how the British Empire has shaped modern Britain. Highly recommend!

The history of British colonialism, with its roots in a brutal, racist caste system of their own, is fascinating and eye-opening.