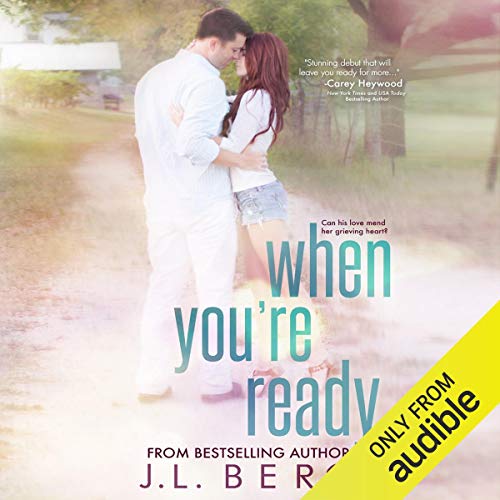 Years after suffering the tragic loss of her husband, Ethan, which left her alone to raise their young daughter, Clare Murray still holds the last letter he wrote with the words "When You're Ready" written in his familiar messy handwriting, unable to break its weathered seal. Ready for what? He was her entire world, and Clare had accepted a life without him, without love. Until years later, fate brings her to an emergency room, and face to face with a stormy-eyed doctor intent on changing her mind.

Son of a billionaire, Logan Matthews has spent his life trying to make his absentee father proud. Without a family to depend on, all he's ever wanted is a place to call home. After a failed marriage, Logan believes he's unworthy of love...until he meets a woman who awakens his spirit and transforms his entire life in an instant. But how far are Clare and Logan willing to go for love? Can his love mend the pieces of her grieving heart?

When their love is tested, is Clare ready to put her whole heart on the line again? Can Logan learn the true meaning of love, even if it means sacrificing his own happiness? When a second chance at love is given, Clare and Logan learn you are never truly ready until you're ready to risk it all.

I didn't finish this book because.....

anyone who likes to hear the 'f' word constantly

What was most disappointing about J. L. Berg’s story?

that I didn't get to finish it...the storyline was very interesting. I just don't understand why you think you have to use the 'f' word to keep interest.

Could you rate books so that we know what type of content it has before we buy?

Tug at Your Heart Strings in Every Way

Such an wonderful book. It made me smile non stop, laugh out loud, and cry till mascara was all down my face. I saw people say it's predictable, well it's a romance novel of course it is! The point is the journey to get the happily ever after. The love between Logan and Claire is so beautiful your heart just squeezes. Hiwever, little Maddie stole my heart in this story. The instant bond between Maddie and Logan is what makes this one of my favorite romance novels.

The story is told from 2 points of view and obviously has 2 narrators. I loved the female narrated and thought she did a wonderful job. I didn't love the male narrators take on the female voice. Fortunately, the story was so great and usually told through Clare's pov that I got over it quickly.

I highly recommend this to anyone wanting a sweet love story that will tug on your heart strings. If your wanting major twists, mystery, and unpredictability pick another genre. This book kept my interest and I'll reread it again. I can't wait to start the next book, because all my laughs were caused by Leah and her lack of a filter.

Only made it to Chapter 3 and stopped. It sounds like it would be a good story but there is really no need for all the F-bombs and the GD usage. The story could have been told just as well without these. They were not needed, especially where they were used. I would have expected this type of language if it were a cop/crime story or a military story, but not this. Sorry but just not for me.

Horrible waste of a credit

This book was so predictable. The pacing of the narration was often off and lacked expression. The child's voice made me cringe. Don't bother

Loved this story about redemption, second chances and starting new. Logan was the local playboy.. Clare the young widow, thinking she had already found her soul mate but now he was gone.

Both help each other move past their failures and insecurities and guide each other towards a love that neither thought they deserved.

The narrators were great and kept me interested and ready for more.

This audiobook was sweet and romantic, with a jaded hero and a widowed mother with a young child. The story was entertaining , though at times it felt a little slow. The narration was excellent. Overall, good listening!

I thought it was a touching story of love, perseverance, & devotion. it was a tad bit more cursing than I was used to. But overall, I believe this was a good read, which lead to the unfinished story of Leah.

This book touched numerous emotions. The intimacy of the couple was just right. Loved the character development and background stories. There was even some suspense thrown in for good measure. A really good listen.

I really enjoyed this book. Full of emotion. From teary eyed to LOL moments. Heart felt!!

Weak story that tries to compensate

Pretty predicatble but could have been a sweet story if not for the constant use of the "F" word.