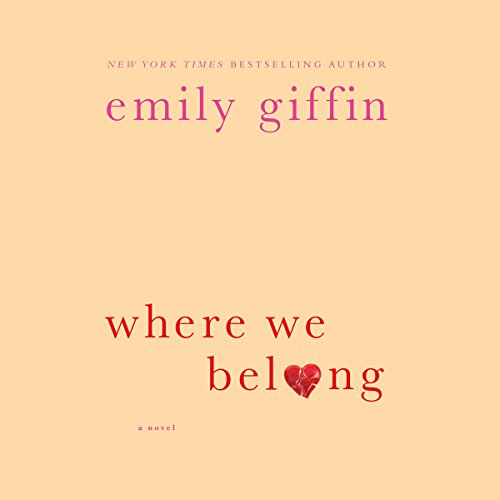 The author of five blockbuster novels, Emily Giffin delivers an unforgettable story of two women, the families that make them who they are, and the longing, loyalty, and love that binds them together.

Marian Caldwell is a 36-year-old television producer, living her dream in New York City. With a fulfilling career and satisfying relationship, she has convinced everyone, including herself, that her life is just as she wants it to be. But one night, Marian answers a knock on the door ... only to find Kirby Rose, an 18-year-old girl with a key to a past that Marian thought she had sealed off forever. From the moment Kirby appears on her doorstep, Marian’s perfectly constructed world - and her very identity - will be shaken to its core, resurrecting ghosts and memories of a passionate young love affair that threaten everything that has come to define her.

For the precocious and determined Kirby, the encounter will spur a process of discovery that ushers her across the threshold of adulthood, forcing her to re-evaluate her family and future in a wise and bittersweet light. As the two women embark on a journey to find the one thing missing in their lives, each will come to recognize that where we belong is often where we least expect to find ourselves - a place that we may have willed ourselves to forget, but that the heart remembers forever.

I've read mustbif Giffin's books and this one is similar in tone like the rest. I really enjoyed listening to the different perspectives of the main characters.

Very well written and very well Narrated, I find the narrator can be a make it or break it for me with an audiobook, she did great transitioning between characters and had a nice voice to listen too, I really enjoyed this book.

What made the experience of listening to Where We Belong the most enjoyable?

Very enjoyable book touching on many emotional topics that managed to put a lump in my throat more than once. It was a feel good story and although I found parts predictable, it was still just the kind of story I was in the mood for hearing. I loved the narrator's voice and she did a tremendous job with the various roles.

Pretty good, but missing something...

This is a heartwarming story from Giffin and if you like her past books, then you're likely to enjoy this, as well. It's well read by Orlagh Cassidy and the story has a good flow, but I did feel like it was missing something.....some meat, if you will. It was all a little too good to be true and just when you thought she would really delve into a character or relationship, she moved on to the next thing. For example...and this isn't really a spoiler, but just in case: SPOILER ALERT: nobody feels any conflict about the situation, everyone forgives the main character, everyone has great relationships with their parents, all of whom great, happy, understanding people and best pals with their kids. Kirby who is supposed to be an angsty teen that doesn't really fit in, finds peace all the parents, her sister and a boyfriend. Ain't life grand for everyone!?
it just seemed a little too happy and tidy to be a believable story.

But, Giffin is an enjoyable author. The overall story was a good listen. I was just hoping for a little more.

I needed something light and this book did it for me. Very well written and the characters come to life! From the get go, I enjoyed and looked forward to my time with these
characters. Thanks

Emily Giffin is that rare writer whose craft is continually refined with each book. I've enjoyed all her novels, but this one is the most developed, well researched yet. She paints such a gutsy, frank look at adoption, relationships and family against the hollow, plastic reality of the television industry. Evocative, heart wrenching, and simultaneously warming, Where We Belong is a thoroughly engaging tale with a fine narration by Orlagh Cassidy.

This book was definitely worth listening to. I've read and listened to all of Emily Giffin's books and this is easily my favorite. The story is so grripping you don't want to stop listening!

What does Orlagh Cassidy bring to the story that you wouldn’t experience if you just read the book?

The narrator was perfect for this story.

If you could sum up Where We Belong in three words, what would they be?

What does Orlagh Cassidy bring to the story that you wouldn’t experience if you just read the book?

Who was the most memorable character of Where We Belong and why?

Kirby was very memorable because it was easy to see her grow up and gain respect for her adoptive parents.

I'm usually a thriller or mystery person but once in a while I like to switch to something different. Emily Giffin is my go to person for that switch. She never lets me down.

Longing for an epilogue.

Just when it was getting better and having the sense of acceptance and belonging for all parties, the story ended. I wish there were more story in what happened to Kirby's birth parents in the end.

Who was the most memorable character of Where We Belong and why?

I enjoyed the character of Marian. I could see how her story in the novel could be relatable to other women.

I enjoyed the switch between the two main characters every other chapter. It provided two different voices

What made the experience of listening to Where We Belong the most enjoyable?

Great story. Had me in tears one moment and laughing the next.

Kirby- she is not your typical teen and far from perfect, but lovable

I wanted to like this book, but the polarized characters and their circumstances put me off. I found the character of Marian to be selfish, shallow and predictably into the glitter and bling that comes from a successful life and from being part of a highly advantaged upper class background. She eventually evolves, by necessity, into a more open, inclusive person and for that I give her credit.

I also thought that the adoption was not well-considered. Marian was (and still is) in wealthy circumstances, with parents willing and able to help - aren't these kind of advantages one would want to give a child? It seems that giving away a baby to a "better life" doesn't really ring true in this case, and then, how is "better" defined?

Truth be told, I don't think that the 18-yr-old Marian saw a life with Conrad and baby to be a realistic option for her, that she wanted more - more in terms of security, reliability, prosperity, and the ability to continue her life in the manner in which she was raised. I don't see anything really wrong in this, so perhaps I am on the fence.

Then there is... "Kirby". Despite that her character IMO has a dumb name, and as interpreted by Orlagh Cassidy sounds predictably juvenile and under-sophisticated and her voice sounds annoyingly ducklike, her "nice", neutral but unremarkable midwestern middle-class background - with all its white bread aspects - is pitted against the eye-popping glitz and glamour of Marian's exotic-by-comparison life.

But the ending seemed to fit. There didn't seem to be any compelling reason, even the existence of Kirby, for Marian and Conrad to restart their relationship. What would Marian do with this? Move to Chicago and try to reinvent her producer status there? Could Conrad and Marian actually make it as a couple? It seems that these two are still in love, but love is not enough.

The book seems to be saying that there are certain relationships that are for love, fun and excitement, and others that are more "appropriate" and realistic. The Peter/Marian connection is one of these latter types, and I just assumed that after breaking up with Peter right after she'd been around the still wild-and-crazy artist Conrad, she'd just go on to find a similar character.

I can see why Emily Giffin is so successful, though. Polarizing is probably a requirement of the types of novels she writes, and this novel in particular opens the possibility of further development - will there be a sequel? Or will some other author pick up this theme?

I have to say that on balance I enjoyed the book - more entertaining than annoying.