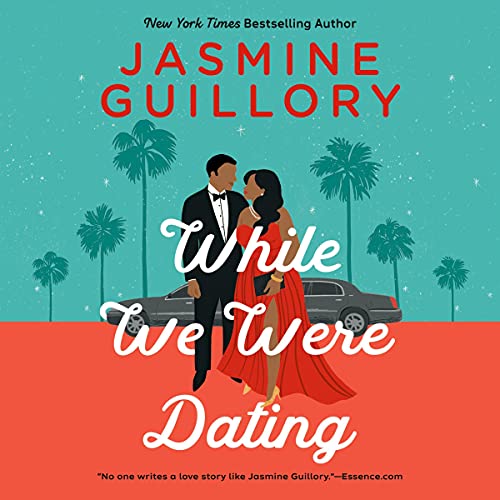 While We Were Dating

Two people realize that it’s no longer an act when they veer off-script in this sizzling romantic comedy by New York Times best-selling author Jasmine Guillory.

Ben Stephens has never bothered with serious relationships. He has plenty of casual dates to keep him busy, family drama he’s trying to ignore, and his advertising job to focus on. When Ben lands a huge ad campaign featuring movie star, Anna Gardiner, however, it’s hard to keep it purely professional. Anna is not just gorgeous and sexy, she’s also down to earth and considerate, and he can’t help flirting a little....

Anna Gardiner is on a mission: to make herself a household name, and this ad campaign will be a great distraction while she waits to hear if she’s booked her next movie. However, she didn’t expect Ben Stephens to be her biggest distraction. She knows mixing business with pleasure never works out, but why not indulge in a harmless flirtation?

But their light-hearted banter takes a turn for the serious when Ben helps Anna in a family emergency, and they reveal truths about themselves to each other, truths they’ve barely shared with those closest to them.

When the opportunity comes to turn their real-life fling into something more for the Hollywood spotlight, will Ben be content to play the background role in Anna’s life and leave when the cameras stop rolling? Or could he be the leading man she needs to craft their own Hollywood ending?

"Jasmine Guillory is the undisputed queen of the modern-day romance, and this novel - in which a budding movie star and the ad guy tasked with making her famous fall hard for one another before encountering life’s many complications - is yet another jewel in her crown.” (Vogue)

"The novel introduces thoughtful commentary on mental health, racism and body image issues in Hollywood, while still tying together all the components readers want from a dreamy celebrity romance." (USA Today)

Ce que les auditeurs disent de While We Were Dating

...for the next Jasmine Guillory book to release. I couldn't stop listening to this one.

I really enjoyed this book. It was great to catch up with Theo and Maddie. I don't want to spoil the book for my fellow readers. But this book is sexy with nice plot turns. It was worth the wait. The narrator was really added to the story. Good job!!

Jasmine Guillory is the best!!

I love the narrator Janina Edwards- I believe she has narrated all of the books this far and she's amazing from her tone, to the emotion she puts into reading the story. the book was a beautiful romance as all the others are and Jasmine has somehow intertwined 6 love stories without making it messy!! LOVE this one!

The overall story I liked but the heroine Anna just wasn’t it for me. I loved Ben and loved how he finally opened up for a woman instead of being the typical playboy Ben. I wish we got more on his meeting up with Dawn, therapy, interactions with Theo/their mom, and just more from Ben’s side in general. Everything with Anna was over the top and just not likeable. Running and hiding from her anxiety I know played a role in her actions but at certain points I just think she was in denial about someone being able to love her. Jasmine Guillory’s writing is still wonderful and I’m sad to see this series end especially when this doesn’t feel like the end and this story has me wanting more on the situation with Dawn. Lastly this was a good listen for audible, Janina Edwards always does a great job. Not favorite of this series but still a decent story.

Very basic! I finished the book so I guess it wasn’t THAT bad but it gave me Watpad vibes! I wouldn’t recommend

What a great story. I love listen to it. Thank you for another wonderful book. Please keep writing.

Jasmine Guillory NEVER disappoints! Such a fresh and awesome voice! I Loved this story liked I have loved every story written by her. The narrator was also amazing!!

I love this author and the narrator reads phenomenally ,on to the next one! Thank you

Didn’t feel part of the series

Didn’t feel part of the series there was a small appearance from Nic and Carlos. Great book and narration regardless

I wasn’t able to connect with the characters, and to me most of the dialogues between them was predictable and shallow. I was fast forwarding at the end .

I LOVE Jasmine Guillory & the 1st couple books but now especially this one, its still good & I'd read another one, but how many times can you write the same thing? I feel like this series needs to be DONE , OVER WITH. I want to read what else she can do, I want to read new characters in a new universe. This is getting Boring...