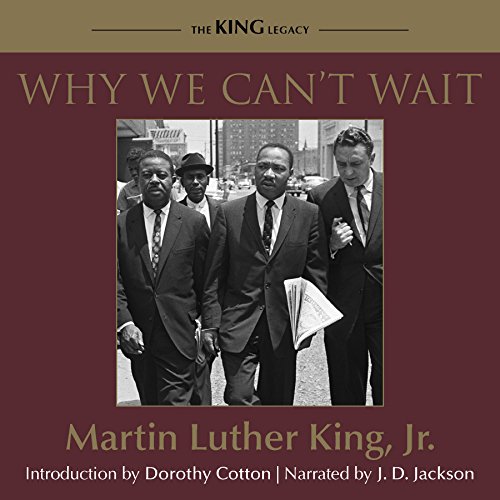 Why We Can't Wait

Dr. King's best-selling account of the civil rights movement in Birmingham during the spring and summer of 1963

On April 16, 1963, as the violent events of the Birmingham campaign unfolded in the city's streets, Dr. Martin Luther King, Jr., composed a letter from his prison cell in response to local religious leaders' criticism of the campaign. The resulting piece of extraordinary protest writing, "Letter from Birmingham Jail", was widely circulated and published in numerous periodicals. After the conclusion of the campaign and the March on Washington for Jobs and Freedom in 1963, King further developed the ideas introduced in the letter in Why We Can't Wait, which tells the story of African-American activism in the spring and summer of 1963. During this time, Birmingham, Alabama, was perhaps the most racially segregated city in the United States, but the campaign launched by King, Fred Shuttlesworth, and others demonstrated to the world the power of nonviolent direct action.

Often applauded as King's most incisive and eloquent book, Why We Can't Wait recounts the Birmingham campaign in vivid detail, while underscoring why 1963 was such a crucial year for the civil rights movement. Disappointed by the slow pace of school desegregation and civil rights legislation, King observed that by 1963 - during which the country celebrated the 100th anniversary of the Emancipation Proclamation - Asia and Africa were "moving with jetlike speed toward gaining political independence but we still creep at a horse-and-buggy pace."

King examines the history of the civil rights struggle, noting tasks that future generations must accomplish to bring about full equality, and asserts that African Americans have already waited over three centuries for civil rights and that it is time to be proactive: "For years now, I have heard the word 'Wait!' It rings in the ear of every Negro with piercing familiarity. This 'Wait' has almost always meant 'Never.' We must come to see, with one of our distinguished jurists, that 'justice too long delayed is justice denied.'"

I’m 35 years old and learnt that I’ve never listened to any of MLK’s speeches in full context nor read much about him. I also grieve that his legacy isn’t taught in schools. As a teenager I don’t think I was in the space to pay much attention. But now as I am paying more attention to the world, notably this nations horrific history, it would have been nice to point to MLK and everyone who’s attending public education know the incredible work and sacrifices he made. The words he has for this time is priceless and precious.

MLK is the most celebrated American civil rights activist for many reasons, and this book largely explains why. He preaches non-violence as the most effective tool to drive social justice movements in America and in the world. The history of the Civil Rights movement in America is eloquently presented by MLK, who is lyrically masterful at conveying many sides of the complexity of racism in America. Further, the narrator tells the story beautifully. Especially given the tumultuous racial issues currently happening (especially since the George Floyd incident and more), this is a must read book for everyone, especially those looking to affect change.

not much more i can say than it being a hell of a listen. and a extremely well written as well as being highly touching.

A book by a pragmatic visionary way ahead of most

A reference for human rights activists, economists, and politicians of all ways of life, allegiance or creed.

I wanted to go back to the beginning of the modern civil rights movement. We as a country have created new sanctioned forms of discrimination and cancellation, too, so it's worth a refresher to understand and persevere with patience and nonviolent insistence.

This is at least the second time that I read this book. I read it because of the upheaval of 2020. Re-reading it reminded me of the timeless, profound insights of Dr. MLK, Jr. All of us have to realize that the movement has been going on for hundreds of years for Indigenous, Black, and Latinx people in this land. MLK, Jr. argues for the urgency of the moment, but I say the urgency has always been there.

Anyone in or wanting to be in a leadership position must read this book. Dr. King is a true example of what a leader looks like.

The words of Dr. MLK are so powerful and thought provoking. This should be required reading for all!

A detailed look behind the curtain and an elaboration of the context of a time we all have heard about but scarcely understand.

A prophet of our times!

Everyone must read these words from Dr. Martin Luther King, Jr. A true prophetic voice. We need to take up the belief once again of non violent, direct action.