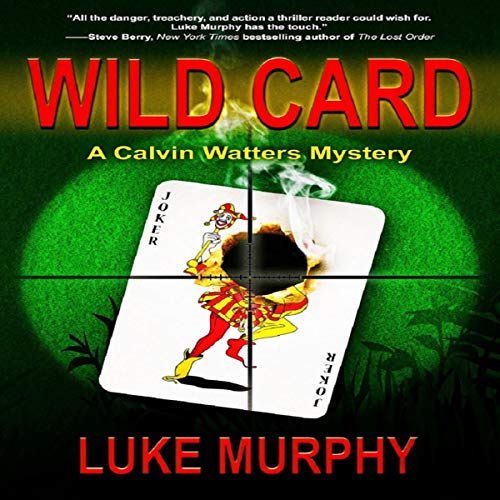 After proving his innocence as a murder suspect, taking down an assassin, and being an instrumental part in solving a high profile murder, Calvin Watters believes he can finally move on, until Ace Sanders’ prison escape catapults him into action.

Something has always bothered detective Dale Dayton about the arrest of Ace Sanders. Call it police intuition, but his inner "cop alarm" keeps twitching. When Dale reopens the case, he’s introduced to new evidence that leads him into a political nightmare.

Who will play the wild card to survive?

While Calvin tracks Sanders across continents and into unknown, unfriendly surroundings, Dale remains in Vegas to uncover the truth behind police corruption, prison escapes, and hired assassins. But Calvin and Dale must be vigilant, because there’s a deadly, new player in town.

“Hold on for a wild ride that doesn’t end until the last page.” (Jordan Dane, best-selling author of the Sweet Justice series)

“A highly addictive read.” (Nadine Doolittle, author of Iced Under)

“From the glitter and grunge of the Vegas strip to the steamy depths of the Amazon rainforest, Wild Card takes the reader on an unforgettable trip.” (Jeff Buick, author of Bloodline)

Wild Card is Book 2 in the Calvin Watters Mystery series and follows protagonist Calvin Watters who is now a private detective. Many characters from book 1 return and play an integral part in the story. The story is fast paced, has lots of action and is pretty funny but it is fairly unrealistic the situations that Calvin gets into and survives. If you can get past some of the far fetched aspects of the story it is pretty fun and enjoyable.

The narration by Connor Goff is well done and he does a great job with the character voices.

If you enjoyed book 1 in the series or enjoy fun action filled mysteries or thrillers you will probably enjoy this book as well.

"Please note I was given this free review copy audio book at my request and have voluntarily left this review."

Too contrived and unrealistic

This book is a continuation of the story begun in Dead Man's Hand, book 1 of this series. Many of the characters introduced in book 1 return in this novel. Somewhat disappointingly, this story is just too contrived with too many superhuman feats and unlikely coincidences. It's exciting and suspenseful, but unrealistic. Again, it does not end with a cliffhanger, but is set up for a continuation of the story.

Conner Goff continues to narrate this series with a competent performance.

NOTE: I was given this free review copy audiobook at my request and have voluntarily left this review.