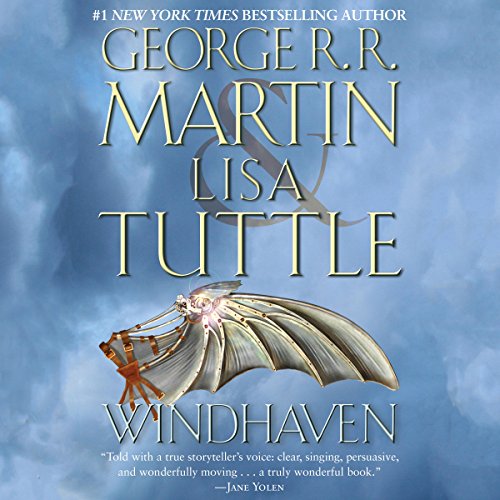 George R. R. Martin has thrilled a generation of listeners with his epic works of the imagination, most recently the critically acclaimed New York Times best-selling saga told in the novels A Game of Thrones, A Clash of Kings, and A Storm of Swords. Lisa Tuttle has won acclaim from fans of science fiction, horror, and fantasy alike - most recently for her haunting novel The Pillow Friend. Now together they gift listeners with this classic tale of a brilliantly rendered world of ironbound tradition, where a rebellious soul seeks to prove the power of a dream.

The planet of Windhaven was not originally a home to humans, but it became one following the crash of a colony starship. It is a world of small islands, harsh weather, and monster-infested seas. Communication among the scattered settlements was virtually impossible until the discovery that, thanks to light gravity and a dense atmosphere, humans were able to fly with the aid of metal wings made of bits of the cannibalized spaceship.

Many generations later, among the scattered islands that make up the water world of Windhaven, no one holds more prestige than the silver-winged flyers, who bring news, gossip, songs, and stories. They are romantic figures crossing treacherous oceans, braving shifting winds and sudden storms that could easily dash them from the sky to instant death. They are also members of an increasingly elite caste, for the wings - always in limited quantity - are growing gradually rarer as their bearers perish.

With such elitism comes arrogance and a rigid adherence to hidebound tradition. And for the flyers, allowing just anyone to join their cadre is an idea that borders on heresy. Wings are meant only for the offspring of flyers - now the new nobility of Windhaven. Except that sometimes life is not quite so neat.

Maris of Amberly, a fisherman's daughter, was raised by a flyer and wants nothing more than to soar on the currents high above Windhaven. By tradition, however, the wings must go to her stepbrother, Coll, the flyer's legitimate son. But Coll wants only to be a singer, traveling the world by sea. So Maris challenges tradition, demanding that flyers be chosen on the basis of merit rather than inheritance. And when she wins that bitter battle, she discovers that her troubles are only beginning.

For not all flyers are willing to accept the world's new structure, and as Maris battles to teach those who yearn to fly, she finds herself likewise fighting to preserve the integrity of a society she so longed to join - not to mention the very fabric that holds her culture together.

"A powerful flight of the imagination ... wrought by a pair of writers noted for excellence." (Roger Zelazny)
"Told with a true storyteller's voice: clear, singing, persuasive, and wonderfully moving. They have made a mythic land and peopled it with unforgettable characters. It is a book for adults and children who have dreamed of flying with their own wings, and for story listeners of all ages for whom dreams are as potent as realities. A truly wonderful book." (Jane Yolen)
"The pace never slackens, shifting easily from moments of almost unbearable tension to others of sheer poetry and exhilaration. Martin and Tuttle make wonderful professional music together." ( Fort Worth Star-Telegram)

An early 1980s collaboration between a now-famous author and a less famous one, Windhaven demonstrates that the young George R.R. Martin had talent for world-building and character-driven storytelling. While not as sprawling and a whole lot less violent than A Game of Thrones, it’ll probably appeal to anyone who liked his more family-friendly Hedge Knight novella.

The story takes place on a distant, windswept ocean world, where humans lost advanced technology generations ago, but were able to cannibalize their wrecked starship and build muscle-and-wind-powered wings to carry messengers over the dangerous seas between far-flung islands. Over time, a caste system has evolved in which wings are passed down by inheritance, with most people excluded from the chance to fly and be a citizen of the world. However, that changes when a young woman named Maris challenges tradition and brings about an opening of the system. From there, the plot, which takes snapshots of Maris’s life over the next few decades, shows how change often brings complications.

The writing isn’t too sophisticated, but I thought Windhaven worked well on the level of a Young Adult fantasy novel, conveying the thrill of flying and a poignant sense of having a privilege that’s hard to bear losing. What I really enjoyed though, was the nuance that the authors put into the story’s evolution. At each stage of her life, Maris finds her idealism echoed by younger people, who push things a bit further and bring about new shakeups in the political order of the world, not always with desirable consequences. The characters aren’t complex, but their varied perspectives are each given a fair hearing. Not surprisingly, there’s a quiet play on the Icarus myth that runs through the story, touching on its different chords.

All in all, a well-constructed, bittersweet minor gem of a novel, and I’m glad someone saw fit to bring it out of the vault and produce an audio version. Its drama is simpler and more reflective than that of A Game of Thrones, but it’s an early highlight in Martin’s career, written along with a friend (I’m not so familiar with Lisa Tuttle’s work). And, unlike the aforementioned series, you can actually finish reading it! The audiobook narrator does a fine job, representing different characters with distinct accents.

Seemed to be missing the middle of the story

The book was written in three parts, each part reading like a short story with its own beginning and climax.

I liked the concept of the flyers and it was entertaining, though some of the characters were a bit flat.

My main problem was that the middle of the book seemed to be missing.

Wait a minute... shouldn't there be some story about Maris actually BEING a flyer? There was foreshadowing of other cultures as well as introductions to some interesting characters and situations that were completely dropped.

The lack of these things left me sorely disappointed. I was given only Maris' regrets about all the places she had been and the people she had met (some of whom were mentioned ONLY in narration as Maris is lamenting the loss of her wings). I was hungry for so much more than I was given, and this is why I didn't give this book a better rating.

I suppose so, if they like Young Adult novels. This is a very straightforward story, with reasonably simple characters and plot, but I found it endearing nonetheless. I was a little sad when I got to the end, knowing that this was it for Maris, and her adventures.

What was one of the most memorable moments of Windhaven?

I liked the competitions at the end of the second story. There were also some moments of character interaction that I liked, such as the scene between Maris and Val after Maris talks with Arak.

Which character – as performed by Harriet Walter – was your favorite?

None of them stands far above the others, but if I had to choose one, it would be Val "One-Wing". He makes a nicely abrasive foil for the pleasant, naïve Maris. Walter's reading in all was pretty good.

I would have to say no. It was nice, but not a page turner.

I know nothing of Lisa Tuttle; I found this book by looking up George R. R. Martin, as I think most people do. To them: you will not likely enjoy this book if you go into it expecting something in the vein of "A Song Of Ice And Fire." It's much simpler, and much lighter.

It's a very rich and satisfying book.

Its delicately sweet on the outside of the feeling you get from the book. But the core is robust. Grate book!

Like other readers, I felt this story was lacking

As above, this story just felt like it was missing something. It wasn't bad, but it wasn't good. It went on and on without ever really building to a crescendo. Good narrator, but I'd pass on spending a credit.

The setting is simple, the premise is easy to follow, and the story is one we've heard before. Yet it is all very compelling. An aristocratic society that controls who can and cannot be a flyer is defied by an adopted orphan of someone of "proper birth." This sets in motion a story all about changing an arguably corrupt system into an "equal rights revolution" for flying. The resources required to be a flyer are scarce, and those who use the wings are revered as close to godlike status. All in all, a great use of a story told before, and definitely not one to pass up. #ClassSystem #revolution #suspenseful #FemaleProtagonist #underdog #TagsGiving #Sweepstakes

Dissappointing from this author. The narration was at best mediocre. would not invest the time listening to it again. I suggest you pick something else.

A story that will have your heart in your mouth or the pit of your stomach as the winds carry you to the far off land of Windheaven . As gripping a story as any by GRR Martini. Windheaven fallows Maris on her journey of dairying flight, self discovery, and triumph over those who would tell her not to even try. A story centric world building experience one will not soon forget.

Fantastic on every level!

I love the GoT series and was struggling to find something to keep me entertained while waiting for Winds of Winter to be released. I started reading Fevre Dream (also fantastic) at home and wanted another story to listen to while I work. This story was a perfect addition to my audible library! I think the narrator made me like the story even more than if I'd read it by myself. She brought so much life to the characters and made them all unique without making it sound forced or fake.

Very good all around.

George and Lisa did an amazing job. Plenty of moral conundrums and great story telling. The performance was top notch as well. Fantasy at it finest.