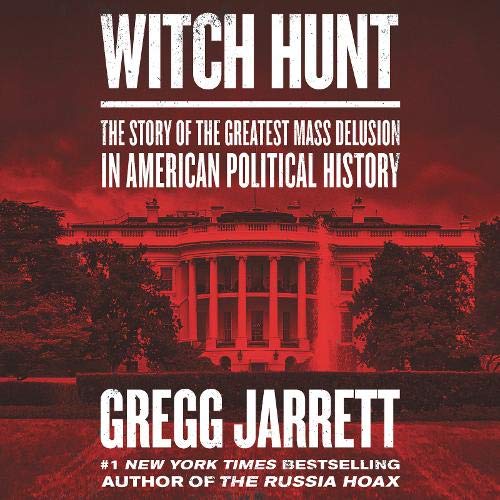 How did a small group of powerful intelligence officials convince tens of millions of Americans that the president is a traitor, without a shred of evidence?

Now that every detail and argument set forth in the number one New York Times best seller, The Russia Hoax, has been borne out by the Mueller report, the author is back with a hard-hitting, well-reasoned evisceration of what may be the dirtiest trick in political history.

What people tend to forget about witch hunts is that they require people in power to believe there really are witches.

In Witch Hunt, Gregg Jarrett uncovers the bureaucratic malfeasance and malicious politicization of our country’s justice system. The law was weaponized for partisan purposes. Even though it was Hillary Clinton’s campaign that collected and disseminated a trove of lies about Trump from a former British spy and Russian operatives, Democrats and the media spun this into a claim that Trump was working for the Russians.

Senior officials at the FBI, blinded by their political bias and hatred of Trump, went after the wrong person. At the DOJ, the deputy attorney general discussed secretly recording the president and recruiting members of the cabinet to depose Trump. Those behind the witch hunt have either been fired or resigned. Many of them are now under investigation for abuse of power. But what about the pundits who concocted wild narratives in real time on television, or the newspapers which covered the fact that rumors were being investigated without investigating the facts themselves?

Factual, highly persuasive, and damning, this must-hear expose makes clear that not only was there no "collusion", but there was not even a basis for Mueller’s investigation of the charge that has attacked Trump and his administration for more than two years. It’s always been a Witch Hunt.

Russian Colusion so absurd but so believed

The authors have presented a must read for everyone. This book should be part of the curriculum in every learning venue from high school to college. This book is an in depth reveal of the deep states most treacherous and shocking actions. Witch Hunt will be a book that you can't put down.

Full Disclosure: I am a registered Republican and retired US Air Force Captain who is familiar with Gregg Jarrett given that I see him regularly on Fox News. If that statement alone disqualifies me (in your mind) as a person unable to appropriately evaluate Mr. Jarrett's work, then you may want to skip to a review that is at either end of the 1 - 5 star scale (depending upon your tolerance for factual reporting that is not necessarily anti-Trump).

I had several long drives ahead of me during this Christmas/New Year's break so I needed something that would maintain my attention for several 4 to 6-hour stretches behind the wheel. I was curious to see how much new information I could learn about the FBI investigations that fed the 22-month Mueller report, the comparisons between Clinton/Trump collusion with Russia, and how each were investigated (or ignored).

The clear bias that influenced the investigation against the Trump campaign and presidency is nearly as shocking as the "non-investigation" of the Clinton campaign. The direct comparisons Jarrett makes are stunning and do raise serious concerns about how the justice system has been run for decades. The fact that all of this would have completely disappeared had HRC won the election is irrefutable given the mountain of evidence that Jarrett presents with each allegation.

I gave this a "pretty good" (3-star) rating instead of an "it's great" (4-star) because Mr. Jarrett could not resist putting in repetitive negative terminology when it was really not necessary. For example when he mentions former FBI agent Peter Strzok and FBI Lawyer Lisa Page, it is almost always presented as Peter Strzok and "his lover" Lisa Page. Once would have been enough, but I became somewhat sensitive to this unnecessary repetition as each chapter unfolded. Several events with the exact same (or very nearly the same) description were repeated as they applied to multiple chapters. This repetitive pattern also applies to the Steele dossier "funded by Hillary Clinton and the DNC". Whenever the Steele dossier was mentioned, you could almost always count on the rest of the "qualifier" as if we might have forgotten after the first 10 times it was mentioned. This repetitive pattern of "unnecessary qualifiers" can also be found with Sean Hannity's reporting. One would only have to tune in to his radio or television show two or three nights in a row to hear it. For example, Mr. Hannity cannot say Joe Biden's name without adding, "Quid Pro Joe, 30330, You won't get the $1B until the attorney investigating his son, Hunter - No experience - Biden is fired, and son-of-a-B.....".

Overall I did learn a few things that I had not already heard on Fox News. Mr. Jarrett definitely ties the details together in a clear way. However, the Audible version might be less useful as a reference to all of the legal terms and specific regulation numbers that are provided to illustrate specific points. I would recommend this book to anyone interested in a factual presentation of the bias and corruption that was prevalent and still exists. Perhaps the Trump presidency will be recognized as the only thing that could have happened that would expose such levels of bias and unfairness! I do hope that every person involved will be held accountable, but that is probably for another Jarrett follow-up book titled, "A Day of Reckoning" as hinted in the final chapter.

Excellent breakdown of the witch hunt that the attempt to take down a sitting president.

Truth backed up by facts and evidence!

Excellent job of tackling massive amounts of evidence that exposes lies, misinformation, and slight of hand reporting from the formerly credible US media, and laying out the evidence based case against horrendous abuses of power AGAINST Donald Trump!

This review of the Trump-Russia collusion narrative is so thorough and carefully researched, it puts to shame the Mueller report that overlooked the truth and instead tried desperately and unsuccessfully to find anything it could to blame on President Trump. After reading this with a hunger for FACTS, it is clear that those actually responsible for any connection with Russia have gotten a pass. A “must read!”

Listening to this book on audible made everything more real. It is hard to believe that people in our government can be that corrupt and to get away with their corruption makes it worse. I found it to be truthful with facts not bias. All the bias is on the Democrat side. I highly recommend Gregg Jarrett's Witch Hunt and also you need to read his next book The Russia Hoax. If you really want to know the truth then listen or read both of his books. I highly recommend them.

The story is great and displays the inconsistent political actions that have taken place.
The reader provides little to no inflection so it sounds like a tech manual being read to you.

Iintelligent, well researched. Greg and company put in context and answered questions I have had for a long and confusing time. I drank Hillary's Kool-Aid for many years, naively believing she was what I thought she was. How disappointing to finally see her clearly. Thank you Greg for a book everyone should read.

Prison is too lenient for all involved.

Schiff, Pelosi, Commey, Strzok, Maxine waters, al green, Mueller, Hillary clinton, and Barack obama, and anyone else involved, should be stripped and publicly hung by their scrawny necks. That would teach others not to do this kind of stuff again. Damb, I feel so dirty and sick to my stomach after listening to this book.

once again Mr Jarrett has put pen to paper and given us an insight into the nightmare of the Mueller investigation. I like that he does not use legalese just to impress his readers but simply tells it like it is. I enjoy a book more when read by the author so I thank him for that. I would highly recommend his book to anyone interested in the facts of that sham investigation, the Russian collusion theory.