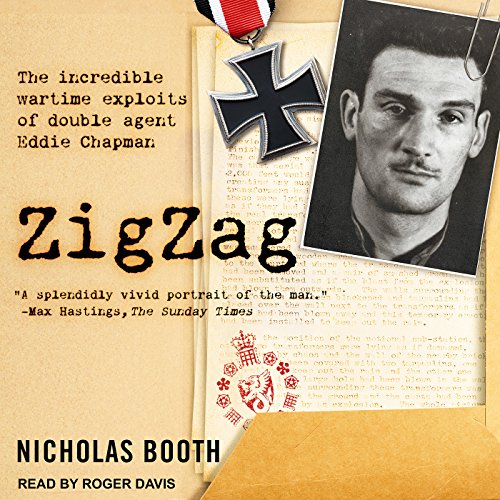 The most remarkable double agent of World War II, Eddie Chapman was witty, handsome, and charming. Too bad he was also a con man, womanizer, and safe-cracker. To the British, though, he was known as ZigZag, one of MI5's most valuable agents. To the Abwehr - German military intelligence - he was known as Fritzchen (Little Fritz), and was believed to be one of their most valued and trusted spies. For three long years, Eddie played this dangerous double game, daily risking life and limb to help the Allies win the war. He was so charming that his German handler, Baron Stefan von Gröning, thought of Fritzchen as the son he never had. The Germans even awarded him the Iron Cross for spying for the Reich! They sent him to Britain, with the mission to blow up the De Havilland aircraft factory. How he and MI5 convinced the Germans that he had accomplished his mission stands as one of history's greatest acts of counterintelligence. Until now, Eddie Chapman's extraordinary double life has never been told, thwarted by the Official Secrets Act. Now all the evidence - including Eddie's MI5 file - has finally been released, paving the way for Nicholas Booth's enthralling account of Eddie's long and extraordinary life.

The Escapades of an Unlikely Double Agent

I often wondered what qualified someone to be a good double agent. This book may not answer that question, but it introduces a man who came pretty close. The narrative has the feel of one of those incredible docu-dramas on network TV. Eddie Chapman's story reads more like that of Walter Mitty (someone with an overactive imagination). The author's epilogue and afterword are not to be missed. These are like icing on the cake!

A bit too detailed and a poor narrator performance

While the story was fascinating I found the narrator dry and distracting. His inflection for emotion and strange tone when quoting the female characters was just strange. The story was also too detailed going into too much minutiae which led to bouts of unengaged listening. Wish a good actor could have narrated and a good editor had been assigned to tell this unique war time story.

forget the first three chapters. He grew up a bad boy, went to jail several times, ended up in prison at the beginning of the war. recruited by the German Abwehr. here it starts becoming a little interesting. Throw away the last chapter. Enjoyed the middle