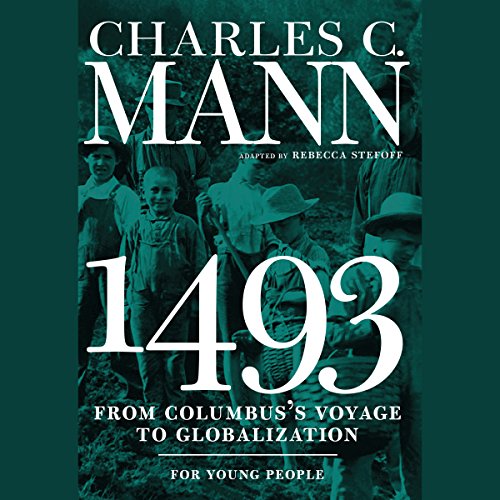 1493 for Young People by Charles C. Mann tells the gripping story of globalization through travel, trade, colonization, and migration from its beginnings in the 15th century to the present.

How did the lowly potato plant feed the poor across Europe and then cause the deaths of millions? How did the rubber plant enable industrialization? What is the connection between malaria, slavery, and the outcome of the American Revolution? How did the fabled silver mountain of 16th-century Bolivia fund economic development in the flood-prone plains of rural China and the wars of the Spanish Empire?

Here is the story of how sometimes the greatest leaps also posed the greatest threats to human advancement. Mann's language is as plainspoken and clear as it is provocative, his research and erudition vast, his conclusions ones that will stimulate the critical thinking of young people. 1493 for Young People provides tools for wrestling with the most pressing issues of today and will empower young people as they struggle with a changing world.

What listeners say about 1493 for Young People

"1493 for Young People" takes this popular history of the explosion that happened post-Columbus and makes it a comprehensible tale. The Columbian Exchange was absolutely b-a-n-a-n-a-s, a biological free-for-all that makes today's globalism seem tame by comparison

There are so many moments that made me think, "Wow, I didn't know that!" Take the "biological bedlam" that came when the Spanish unwittingly brought scale insects to the Caribbean whose sugary excrement ignited the population of native fire ants which in turn destroyed entire plantations and orchards, or that Europeans already knew the world was round, but Columbus was trying to prove that it was pear shaped!

Stefoff simplifies the book, making it fully comprehensible for young people, and narrator James Fouhey is careful and clear.