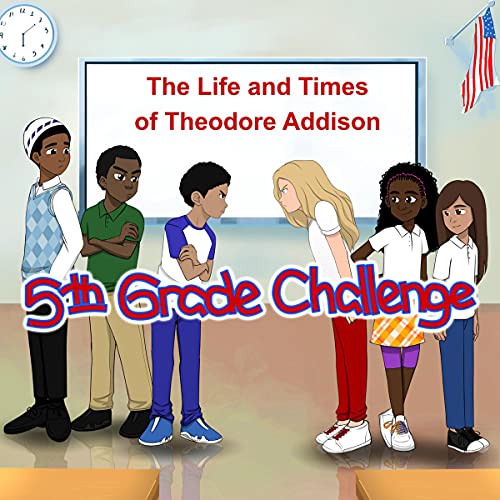 Written by: Jamaal Fridge
Narrated by: Ardin Patterson
Try for $0.00

Ted, the fifth grade genius and Veronica, his archrival, are constantly pranking each other. When the pranks spill over and ignite a grade-wide war, the teachers organize a girls vs. boys competition. They expect to convince the kids to respect each other by setting up events in academics, arts, and athletics. But competitions aren't always fair, and when two girls suddenly become friendly with Ted's teammates, he suspects manipulation is involved. Compelled to prevent Veronica's ruses from succeeding, which could hurt his friend, James, a new immigrant who's already insecure, Ted will go to extremes...even at the cost of losing.

The Life and Times of Theodore Addison is a Christian middle-grade book series full of exciting adventures, captivating characters, and powerful life lessons. Theodore (Ted for short) is a genius who loves engineering, occasionally causes trouble with his inventions, and sometimes struggles to do the right thing, like many of us. Fortunately for him, he'll have lots of people who will tell him to his face when he's wrong and push him to his intellectual and spiritual limits.

The Life and Times of Theodore Addison will bounce back and forth between adventure books and slice-of-life books to pull your children in, wrap them in the love and affirmation of God, give them a deep and rich story they'll be talking about for ages, and teach them life lessons that will stick.