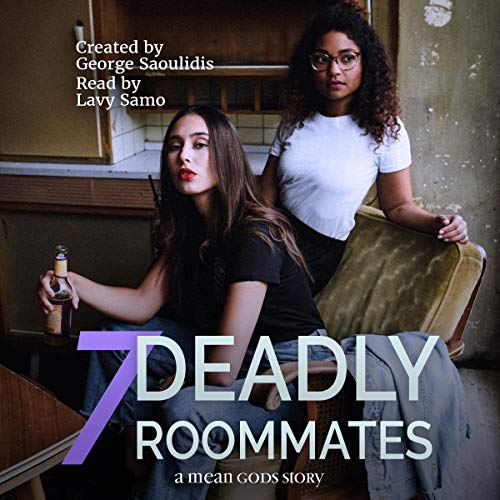 When Horace gets fired from his dead-end job, an unexpected lady gives him the courage to stand up for himself. But will he manage to get his life back in order when seven strange women suddenly burst into his life and his home, when he has agreed to the terms of service without having read them, and when the game these women are playing ends up in either success or death?

Warning: 7 Deadly Roommates contains drug use, low inhibitions, bilingual cursing, British spelling, European political correctness, a ton of stuff given in the metric system, worship of made-up corporate gods, references to male and female body parts, drinking, abuse, attempted murder, polyamory, LGBT characters, diversity, representation of all body types, and the story of a guy who's mixed up in a wicked game of sin.

A unique idea that entertains

A unique story and a great idea that makes for a fun story and entertaining listen. A man (Horace) is basically helped out and made better by his encounters with the embodiment of the seven deadly sins. The premise totally intrigued me and I think the book more than met my expectations and thoroughly entertained me. The way the author works in some plot twists and turns and implementations of the sins and how they are fleshed out was good and I look forward to more of his work.

The narration by Lavy Samo was good overall and thought she had a pretty good range with the characters and good pacing throughout. The ending of the book was a great little surprise and I look forward to what is next.

This is probably the most interesting take on the 7 deadly sins that I’ve ever read. While this audiobook can be a little hard to follow at times, it essentially covers the story of Horace and how the 7 deadly sins, in the forms of women, help him get back on his feet. This book has dark themes, but it also has funny, heartwarming moments. It’s a real rollercoaster of emotions, and the perfect read for fans of urban fantasy.

I think my favorite part about the characterization of the deadly sins is that they weren’t “too out there.” They were relatable, and they were written well, sounding like the flaws of real people. Also, the ending caught me by surprise, but I won’t give any spoilers away.

Interesting take on the seven deadly sins and what they would be like if they came to life. The story is fun to read and has a nice twist at the end.

I think 4 stars is about right .

I received this audio book free of charge & in return I'm trying to offer my unbiased review of this book . I found this book to be hard to follow but even though it seems to wander I found some parts to be funny & entertaining . I'm sitting here recalling much of what I just listened to & thinking how can I best describe what I heard . It was bizarre , there was sex , humor , ice cream , a feisty midget & a bevy of various women & Horace the hero . But as I said trying to put everything in order & review this book I decided the best review was the one that attracted me to listen so here is what the publisher said & I agree 100% . Warning: 7 Deadly Roommates contains drug use, low inhibitions, bilingual cursing, British spelling, European political correctness, a ton of stuff given in the metric system, worship of made-up corporate gods, references to male and female body parts, drinking, abuse, attempted murder, polyamory, LGBT characters, diversity, representation of all body types, and the story of a guy who's mixed up in a wicked game of sin. PS: Loved the narration .

I enjoyed it! The narration was good! The author did a good job with the characters. I look forward to reading more books from this author. I was given a free review copy audiobook at my request and have voluntarily left this review.

7 Deadly Roommates: Mean Gods, Book 1 is written by George Saoulidis. The narration is provided by Lavy Samo. This is a story about a man named Horace who encounters the female embodiment of the seven deadly sins. Through the course of the story, they change his life. It is a wild dark and crazy tale. The story is not for everyone as the disclaimer in the description makes clear. It was enjoyable if a little all over the place.

The narration by Lavy Samo was enjoyable. Ms. Samo delivered an excellent vocal performance showing her wide range with this varied cast of characters. The production quality of this audiobook is also of the highest quality. I heard no problems during the entire performance. There were not any detectable flaws that I was able to hear during the entire performance such as loops, breaks, or buzzing. The production was crisp and clear. Mythography Studios delivered an excellent audiobook production. I was given this free review copy audiobook at my request and have voluntarily left this review.

Did you find this review helpful? If so, would you please take a moment and select the 'helpful' button below? Thanks so much!

I think this story had a lot nore potential than it turned out to be and was an okay listen. The storyline was interesting but I struggled with getting drawn into the story. The characters weren't unlikable, but they just seemed kind of plain. There is a lot of sex throughout.

Narrator seemed to have good voice variation, but the accents used were just a little much for me, personally. I found myself having to really concentrate on what the narrator was saying to understand. Good performance, but needs to be clearer.

I received a review copy at my request and have voluntarily left this unbiased review.