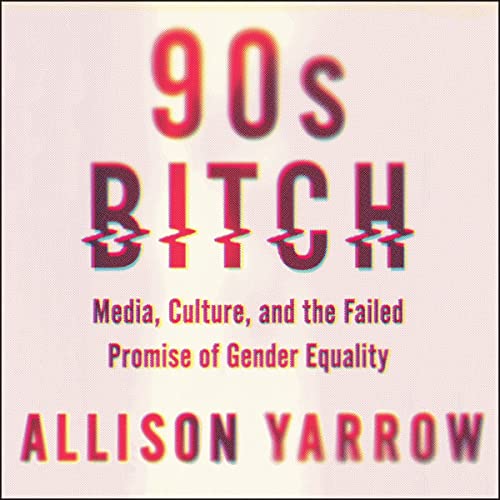 To understand how we got here, we have rewind the VHS tape. 90s Bitch tells the real story of women and girls in the 1990s, exploring how they were maligned by the media, vilified by popular culture, and objectified in the marketplace. Trailblazing women like Hillary Clinton, Anita Hill, Marcia Clark, and Roseanne Barr were undermined. Newsmakers like Monica Lewinsky, Tonya Harding, and Lorena Bobbitt were shamed and misunderstood. The advent of the 24-hour news cycle reinforced society's deeply entrenched sexism. Meanwhile, marketers hijacked feminism and poisoned girlhood for a generation of young women.

Today, there are echoes of '90s “bitchification” nearly everywhere we look. To understand why, we must revisit and interrogate the 1990s - a decade in which female empowerment was twisted into objectification, exploitation, and subjugation.

Yarrow’s thoughtful, juicy, and timely examination is a must-listen for anyone trying to understand 21st-century sexism and end it for the next generation.

What listeners say about 90s Bitch

From Beverly Hills 90210 (I remember sobbing in the backseat of my parents car on a Thursday evening, knowing I’d miss an episode)
To Seventeen magazine (the publication we were reading at age 12-13, and that I dreamed of someday working for)
To YM’s advice and sex columns (a publication that my best friend and I couldn’t bring home and so had to flip through its pages on the floor in a corner corridor of our local small-town mall)
...
I’ve spent the past 30 years first trying to live up to, and later trying to slough off, the expectations and ideas of womanhood that pop culture buried us in up to our necks in the 90’s.

I didn’t know how badly I needed to hear this telling of the decade I came up in. Allison Yarrow’s telling of the 90’s is enlightening, eye opening, and often frustrating. Looking at the decade now with some distance and perspective, it’s amazing how the media formed our opinions and views of these women. I have a newfound understanding and respect for the roads these 90’s bitches paved. Thank you to them. Thank you, Allison Yarrow.

Having also spent my educational years all during the 90’s a lot of this book hit home. I also learned a lot bc the media during the time told a one sided story to many known women of the day. As a woman in the 90’s you couldn’t win no matter what you did and as a young girl growing up then I recognized that. And it angers me that the same bs is around today. I recently read Trainwreck and feel like this book is on a similar page of that as women as hard as it is to hear these kinds of things, it’s good to be aware, to get a perspective on the world we live and operate in and that we have to keep fighting the patriarchy. I feel that any female whether born in/around or after the 90’s can benefit from reading this. To quote Lizzo “If you feel like a girl, then you’re real like a girl, do your thing, run the whole damn world!”

I really enjoyed listening to this one. It dives deep into stories we all know from the present perspective. From a younger persons point of view it really characterized how women were perceived in the 90s. It talks about how women were viewed in the main stream media and how that affects both the women of the past the those women now. Dont read this book if you want to remain nostalgic for the 90s, that's for sure.

I highly recommend it to anyone interested in the topic of women in media.

The books is narrated by the author and she does a good job.

This book is really good and definitely makes me look at my 90's childhood differently. It talks about the rise and the fall of feminism in the 90's.

She talks about so many issues in the 90's where women were targeted and abused in the media and society as a whole for the same things that men do all the time.

The main issues discussed were Marsha Clark, Hillary Clinton, Monica Lewinsky, Anita Hill, and Women in music. This is a great book to help us understand how we got where we are today, in terms of how women are portrayed and expected to act.

And women AND men please read this book.