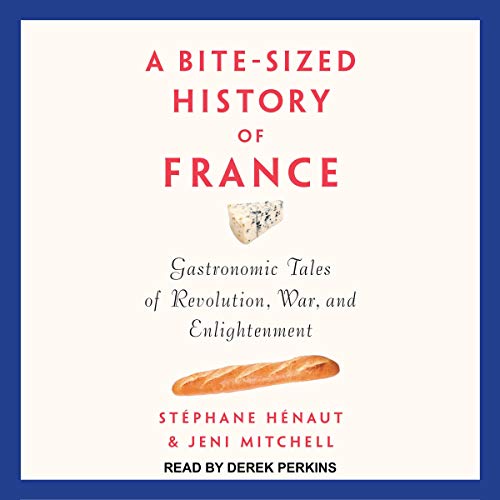 A Bite-Sized History of France

From the cassoulet that won a war to the crêpe that doomed Napoleon, from the rebellions sparked by bread and salt to the new cuisines forged by empire, the history of France is intimately entwined with its gastronomic pursuits. A witty exploration of the facts and legends surrounding some of the most popular French foods and wines by a French cheesemonger and an American academic, A Bite-Sized History of France tells the compelling and often surprising story of France from the Roman era to modern times. Traversing the cuisines of France's most famous cities as well as its underexplored regions, this innovative social history explores the impact of war and imperialism, the age-old tension between tradition and innovation, and the enduring use of food to prop up social and political identities.

The origins of the most legendary French foods and wines - from Roquefort and cognac to croissants and Calvados, from absinthe and oysters to Camembert and champagne - also reveal the social and political trends that propelled France's rise upon the world stage. They help explain France's dark history of war and conquest, as well as its most enlightened cultural achievements and the political and scientific innovations that transformed human history. These gastronomic tales will edify even the most seasoned lovers of food, history, and all things French.

The authors must be extreme leftists. It seems at every possible chance they trashed the right winged political party Fronte Nationale. I don’t mind personal political views, left or right, but the constant bashing got old fast. I would have been just as disappointed if there was constant bashing of left wing political parties.

Must read for anyone interested in food or European history.

I loved the very interesting intertwining of France’s rich history with milestones in its gastronomy, and especially hearing how some food and drink actually contributed to political history! This is literally one of the best audible books I’ve ever listened to! I think I’ll remember more specifics of history because of the storytelling. And the narrator was amazing...I could listen to him read an encyclopedia!

This a history book

When I bought this book, I thought I was mostly about French recipes. However, it is an entertaining look at how France acquired it's famous gastronomy and the historical times of when and how it happened.
Loved it!!

An Audible Visit to Paris

This was the perfect audiobook to listen to in anticipation of my first trip to France this week.

Loved the book, very cleverly written with it's approach to French history via agriculture, gastronomy, wines, etc. I expected a sugar coated history (pun intended) but instead found it frank (another pun) and often unsparing. Many food innovations are the result of war, conflict, colonialism, and this history covers them all. I wish when I was studying American history in school we had access to books that were this honest. Great sense of humor and the narrator is excellent. A little uneven at times but well worth getting through.

A very nice stroll through culture, history, and food. Though the narrative wanders into many side alleys, the gems revealed in each is worth every detour. And every one is tied back into the overall fabric of narrative history in clever and interesting ways. Recommended.

I love both of these subjects and have lately gotten into international food politics via programs like the BBC's Food Chain so this one was perfect for me.

I really enjoyed this book. The author connects history, culture, and food giving readers a new perspective and brief history.

Great history of food and France.

A great walk through French history and the countryside with delectable snack along the way. Explaining the origin and evolution of many familiar French foods and introductions to others unknown to those outside. There is a small amount of political commentary but in the context of this country has a history influence from outside cultures and influencing outside cultures, Not all "French" foods originated in France, just like not all "French" people originated in France. Additionally, this is a history book and most history books have to use some interpretation of events since we were not there.

But...a British narrator? The narrator was fine, but to have some words pronounced in specifically British ways took me out of the mood for a fraction of a second. Not the end of the world, but detracts from the full experience.