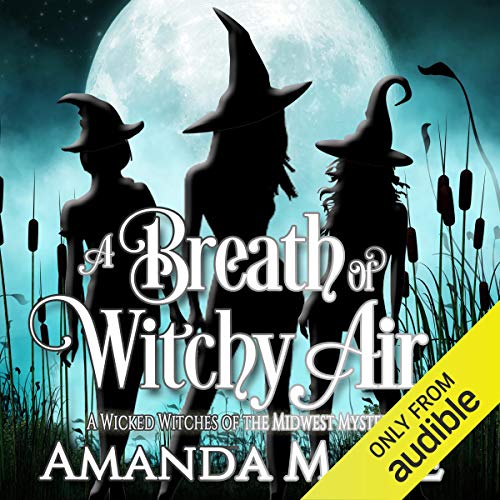 A Breath of Witchy Air

Hemlock Cove is mired in a cold snap, which means the town is calm and quiet. That all changes in an instant when a beer truck tips over on the highway and half the town shows up to get drunk.

Bay Winchester is about to be the sole owner of the town newspaper so she heads out to take photos...and accidentally stumbles over several bodies. It seems there’s a serial killer on the loose, although no one can figure out if the dump site was convenient or if the killer is local.

Some hard digging leads Bay to a local college, where the only thing that stands out is a cellphone game that seems to be taking over the populace. Bay can’t shake the feeling that there’s something off about the game, but that pales in comparison to the dead girls and the motive behind multiple killings.

Things spiral out of control when the game developers pick Hemlock Cove for a big event, which means the town is suddenly flooded with gamers...including Aunt Tillie, who decides that winning really is the most important thing.

Things are about to get wicked for the Winchesters. There’s a killer in their midst and Bay appears to be displaying a new power that no one saw coming.

It’s only a matter of time until two powerful forces collide. Who comes out standing is anybody’s guess but Bay’s new power will be on full display...and may be the ultimate factor in her survival.

What listeners say about A Breath of Witchy Air

I have read better from Amanda Lee. I love Aunt Tilly and the girls but this one was not as much fun. I did start reading the books out of sequence however if I had read this one first I probably would not have gone on. I will read more of Amanda Lee and the witches

I always enjoy the Witches of the Midwest

Amanda M. Lee has written another good installment in her Witches of the Midwest series. I like listening to Bay and company in whatever bad situation she finds herself in and how she gets everyone involved. Hollis McCarthy brings it all to life.

Great story, funny as always. Bay is getting stronger, she managed to protect herself without much help. Landon finally acts as an adult and trusts in Bay's powers. I really enjoyed the book. I hope there is a next one with lots of witchy powers

It was nice to see Bay use her Witchy talents, in fact it be nice to see all of them do so. I still love the books, have them all, but their all witches and except for aunt Tillie's it's rare. Thanks for the change.

Steven~ the game is so much more than what Danny here said
Bay~ really? and you are...?
S~ im Steven Foreman. im a student here at the community college. these are my classmates, Michael Kutcher, and Eric Masterson. you already met Danny Roberts over there

hahahaaa! i think sooomeone was maybe bingeing That 70s Show when she was writing this book?... {noice!😂}

I love the series (the first couple of book as wer we great), but the newer books are too short, the plot seems to be the same - like a soap opera, where one main event is dragged out to 10 episodes.

love this series, each one is amazing and I cant wait to find out what happens next

Second book I have listened to with the new narrator. I really enjoyed listening to this book. I like her voices and timing. I also really like this storyline. I enjoyed the relationship between Bay and Landon. I also liked Aunt Tillie and Bay. The storyline about a phone game was good. So if you like the author or this series, I'm sure you will like this one. Some changes appear to be in store for Bay and she actually seems to be embracing her witchy side.

I can’t get enough of these women! All the books from the full length books to the short stories and the fantasy’s. I am always thrilled to see a new book.
Theses aunts and cousins are full of fire and love. The snark may fly but the always gave each other’s back. The progression of there lives is being done so well. Amanda M Lee has one busy talented mind. I hope she never stops!!