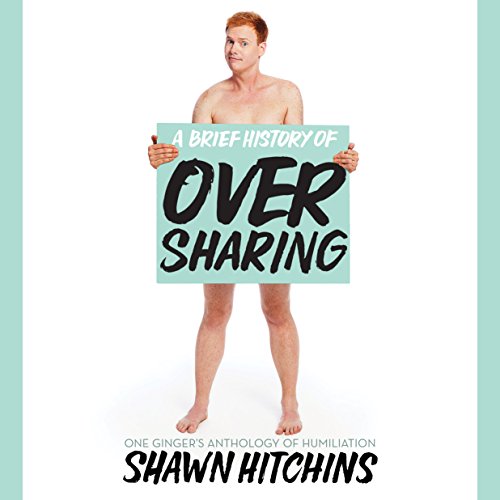 A Brief History of Oversharing

Comedian Shawn Hitchins explores his irreverent nature in this debut collection of essays. Hitchins doesn’t shy away from his failures or celebrate his mild successes - he sacrifices them for an audience’s amusement. He roasts his younger self, the effeminate ginger-haired kid with a competitive streak. The ups and downs of being a sperm donor to a lesbian couple. Then the fiery redhead professes his love for actress Shelley Long, declares his hatred of musical theatre, and recounts a summer spent in Provincetown working as a drag queen.

Nothing is sacred. His first major break-up, how his mother plotted the murder of the family cat, his difficult relationship with his father, becoming an unintentional spokesperson for all redheads, and ̶m̶a̶n̶d̶y̶ ̶m̶o̶o̶r̶e̶ many more.

Blunt, awkward, emotional, ribald, this anthology of humiliation culminates in a greater understanding of love, work, and family. Like the final scene in a Murder She Wrote episode, A Brief History of Oversharing promises everyone the a-ha! moment Oprah tells us to experience. Paired with bourbon, Scottish wool, and Humpty Dumpty Party Mix, this journey is best heard through a lens of schadenfreude.

“Thank you, Shawn Hitchins, for oversharing. Any loss of dignity you experienced from writing this memoir is a laugh-out-loud-funny gain for the rest of us.” (Rick Mercer)

“I am so glad I am not Shawn Hitchins, but I sure wish I could write like him. A Brief History of Oversharing is hilarious and heartwarming. Reading it is like sharing a warm bath with the man himself. At least I hope it’s the bath that’s warm.” (Michael Urie, actor, The Good Wife, Modern Family, Ugly Betty)

“Each moment of sincerity or loss is sandwiched by punchlines and parody.... Yet taken as a whole, there’s a gentle depth to the collection, encouraging each of us, through bumbling example, to learn to accept our own quirks and flaws...like many good comedians, Hitchins is willing to excoriate himself to amuse - and, just maybe, enrich - his audience.” (Quill & Quire)

“A hilarious, thoughtful collection of essays that ultimately offer a collective message to accept ourselves, Hitchins' Anthology of Humiliation is the perfect way to add one of Canada's wittiest voices to any holiday gift exchange.” (CBC Arts, The Year in Queer)

What listeners say about A Brief History of Oversharing