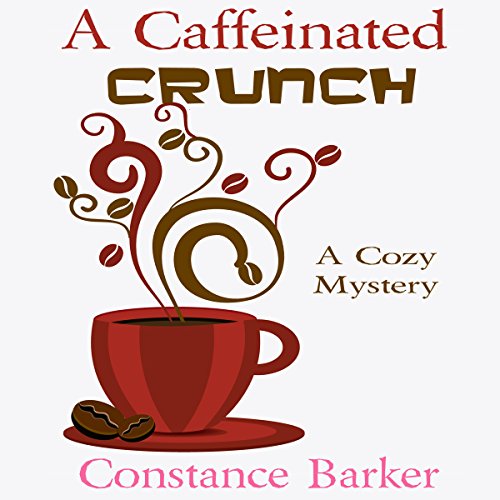 Three dates, a golf cart with a shark fin on top, and a con man.... Lily and her aunts find themselves with dates to the same function. Little do they know the event will end with some unfortunate soul staring into the great beyond. And as they say, hell hath no fury like a woman scorned.

What listeners say about A Caffeinated Crunch

It was okay, but too short for any development

Decent little mystery if you want something quick to listen to and don't want to commit to a longer book, but the story is too short for any real character or plot development, which, in turn, makes the mystery feel super rushed.

Once again, Angel Clark did an alright job as narrator, not the best that I have heard, but far from the worst.

Okay, but too short for any real development

Decent little mystery if you want something quick to listen to and don't want to commit to a longer book, but the story is short for any real character or plot development, which, in turn, makes the mystery feel super rushed.

Once again, Angel Clark did an alright job as narrator, not the best that I have heard, but far from the worst.

This was a nice little short story. Angel Clark does a great job narraiting . They get a lot in a short amount of time. I'll definitely listen to more. if you like mysteries you will love these. If my review was any help will you please click the helpful link. Thank you

I love coffee and mysteries so this series is great!

It's an ok cozy mystery but the story is too short for there to be any character or plot development.

Not to harp on the length of the book, but it is tough to do a mystery well in about two hours. That being said, I think this mystery was well done. There were some small leaps made to get you to the end, but I think that is the author's style. I wasn't bothered by it. If you are the type of person who wants and in-depth, detailed mystery, this series may not be for you. If you like a cozy mystery with some humor and a quick resolution, I can recommend this series.

Angel Clark does a good job with the majority of the narration, but I found the male characters a little grating.

Would you listen to A Caffeinated Crunch again? Why?

No, I slumped a bit but did stay in the seat.

The confession had me laughing out loud.

First up, anything that reminds me of coffee or chocolate is a GREAT thing. That being said, this was a cute story. I must admit the first few minutes were a bit off. The narrator’s voice irritated at the beginning, but I found turning the volume down helped with that. I believe the story would have been better (to me), if I had known what had happened in the first book as it was repeatedly referenced but never told.
My favorite character(s) were the two aunts. I would LOVE to see them in action, a tv series perhaps??? I must admit my favorite part was the grinding of the coffee beans. I found the sound effect and timing hilarious.
The ‘red herring’ thrown out about the killers identity, was a bit too obvious. I felt the ending was rushed, but the killers confession was HILARIOUS. I could actually picture it and HAD to laugh out loud. All in all, I found it a lighthearted and enjoyable romp. Can’t wait to hear more… don’t forget about the tv series idea… just saying…
"This audiobook was provided by the author, narrator, or publisher at no cost in exchange for an unbiased review courtesy of AudiobookBlast dot com."

At a little over two hours long this light cozy that centers around a senior's retirement community is a cute story.

No time for plot twists, the ending is uncomplicated but still satisfying.

Good narrator, lots of southern twang and seniors' voices which can be tricky.

Do you think A Caffeinated Crunch needs a follow-up book? Why or why not?

The story stands alone, it would need to be longer and the characters more developed for a full length series.

lighthearted comedy that will leave you smiling

Great series about adventures that seem to happen around the small town world of the coffe shop ran by a couple if sisters and their neice. The relationships created and broken in the crimes being solved. lighthearted comedy in a great book!
I have recieved this book from the author of this book in exchange for an unbiased review via audiobook blast. com