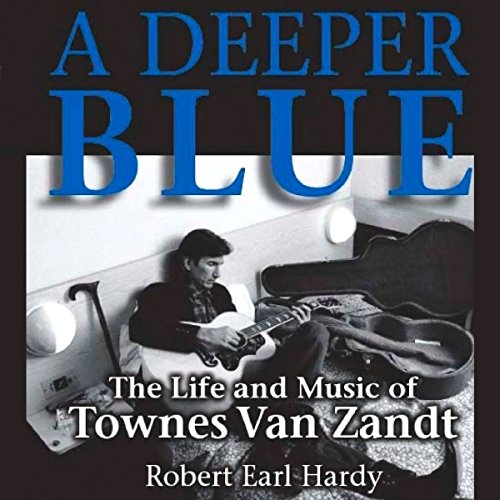 This is the first serious biography of a man widely considered one of Texas’ - and America’s - greatest songwriters. Like Jimmie Rodgers, Woody Guthrie, Robert Johnson, and Hank Williams, Townes Van Zandt was the embodiment of that mythic American figure, the troubled troubadour.

A Deeper Blue traces Van Zandt’s background as the scion of a prominent Texas family; his troubled early years and his transformation from promising pre-law student to wandering folk singer; his life on the road and the demons that pursued and were pursued by him; the women who loved and inspired him; and the brilliance and enduring beauty of his songs, which are explored in depth.

The author draws on eight years’ extensive research and interviews with Townes’ family and closest friends and colleagues. He looks beyond the legend and paints a colorful portrait of a complex man who embraced the darkness of demons and myth as well as the light of deep compassion and humanity, all “[F]or the sake of the song".

The audiobook is published by University Press Audiobooks.

What listeners say about A Deeper Blue

difficult to get past narration

I'm a big Townes fan and found this book lacking in so many details. I also found the narration difficult to enjoy. I would probably have to say this narrator is one of the worst I have ever listened to. Certainly would not recommend the audio version of this book.

I did not know much about Townes Van Zandt before reading/listening to this book, and I learned a lot about a fascinating man, his struggles, his demons, his legacy and legend. It's not a rainbows and puppies kind of story, but it tells you a lot about a man who became legendary. From great struggles comes the most amazing art, and that's the story here. We can all learn a thing or two from this tale, and hopefully use that knowledge to better ourselves, how we see the world, and how the world sees us. Great writing and narration, very much enjoyed it :)
I was given this free review copy audiobook at my request and have voluntarily left this review.

Live Your Life Right, Since You Will Be Remembered

I loved listening to this book and knew very little about Townes and his personal life prior to this book, but this book was really an eye-opener for me about how you should always life your life right, since that is how you will be best remembered. The author obviously took time and researched and interviewed several different folks to get the story(ies) from the viewpoints of friends, families and coworkers. I have enjoyed listening to Van Zandt's music for years and now that I have insights to the mental mind and how he lived, it makes me view it in a different light.

The narration was done by Peter Lerman, and was the first time that I have heard anything from him, and felt as though he did a great job with this book.

This audiobook was provided by the author, narrator, or publisher at no cost in exchange for an unbiased review courtesy of AudiobookBoom

Good Story for Dedicated Fans of Mr. Can Zandt

An honest portrayal of the Late Great Townes Van Zandt. The narrative does a great job balancing analysis of Van Zandt's songs with biography, and contextualizing the songwriting within it's potential sources of inspiration in the events of his life.

A lot of useless details to fill pages

The story of Townes’ life was interesting and heartbreaking.
Unfortunately the author included way too many useless details in an effort to prolong the story.
The reader was very robotic and difficult to listen to for extended periods

Accent of narrator is jarringly bad

In a biography it is essential to have a narrator with the right "voice". It is inexcusable to use an accent from the deep South (ignoring the letter "r", for example) for the biography of a man that spoke with a Texas drawl (pronouncing a "hard R"). I was fighting to finish this audiobook because I really like Townes but there was hardly any information worth putting up with the atrocious intepretation here.

Great detail and gives background on many songs.

The narrator at first is terrible. I almost didn't listen to it due to that. Over time it's not that bad. the writing is well done and Townes Van Zandt was a wild man.

Great book on a music legend

The only criticism I have is the narrator's poor attempt the accents of people's quotes. The book is incredible.

I love Townes, but I can't take the narrator

I am almost half way through this book. I just can't take the narrator. He jumps in and out of accents that sounds ridiculous.


I am listening through my Amazon Dot, so i can't put it at a faster speed. Maybe that will make it better. I am hoping that I will update my review once completed with better feelings towards the book.

Great Story Written in a Easy to Follow Style

I pulled this audiobook off the proverbial bookshelf because I wanted to learn more about the mysterious Texas icon, Townes Van Zandt. Being a songwriter myself, there was much to his story that was relatable to me, both as an inspiration and a cautionary tale. I respected the author's portrayal of Mr. Van Zandt in his truthful presentation of Townes as a genius and revolutionary songwriter and performer, but also an honest telling of the man's obvious flaws and shortcomings, which ultimately resulted in his shortened life.

There were parts of the author's reading that I found irritating. He chooses to distinguish the quotations in the book by narrating with an accent, but misses the mark by consistently sounding like a southerner rather than a Texan. Small annoyance yes, but it messed with my imagery to hear Townes Van Zandt portrayed sounding like a farmer from Alabama, rather than a Texas boy. Interestingly the accent improved in the later chapters of the book.

Good story, good writing, and well told. I would recommend the book to anyone interested in music, songwriting, Texas music history, and The Late Great Townes Van Zandt.

Not a Happy Listen

If you're familiar with the music of Townes Van Zandt (and I am), this book gives a lot of insight into his life. It is not a happy uplifting story, but explains a lot about his bleak, often tragic songs. The book is well researched and draws from a variety of sources including family, friends, spouses and children. It doesn't make any judgement about some very bad life choices, questionable morality and outright wrong behavior. It pretty much reports what happened and the repercussions. Overall it is a good view into a sad life that produced some great music.
The narration by Peter Lerman was good. Accents seemed to be a bit of a struggle and distracted from the narration. Overall he does a good job with a difficult book.
I was given this free audiobook at my request and have voluntarily left this review.