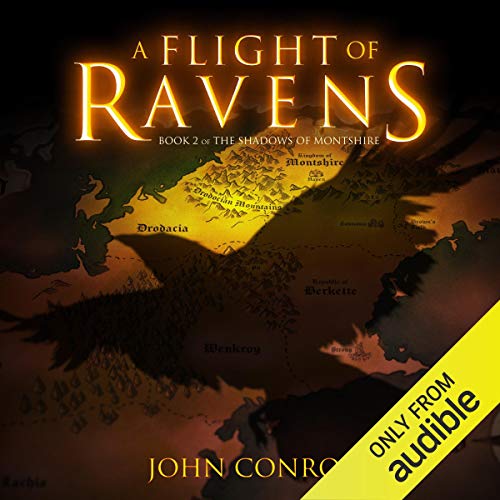 A Flight of Ravens

Savid DelaCrotia, leader of Princess Brona’s Shadows, finds himself facing multiple threats to the Kingdom of Montshire. The return of his horrifically changed friend and battle buddy, Ash Newberry, is almost the least of his worries as a traitor is revealed close to home just as a conspiracy on Montshire’s valuable coastline leads him far from Haven. Once again Savid finds himself a vulnerable game piece in the deadly politics of the king’s court at the worst possible time. Only with the support of his skilled and deadly team can he hope to survive long enough to protect his Princess and her kingdom from threats both far away and near at hand. But Monsthire’s many enemies would do well to remember that shadows abound in both the brightest of light and the darkest night.

What listeners say about A Flight of Ravens

twists and turns all around another good book by J

John Conroe is typically defined as a man who writes a book about werewolves or vampires or any other list of supernatural creatures this series is one where you have a little of that but it's more about people and it's very interesting series with your time.

Hope this will be more than a trilogy!

The story picks up a little while after the last book and turns into a whodunit at several stages. Lots of fun!

Way better pace than the first, hope the series keeps improving. Interesting story presented much better in this book, as to not fall off.

If you’re a fan of Conroe’s the “Demon Accords”, James Patrick Cronin may be a bit confusing. It sounds like you’re listening to Chris Gordon. Sorry James but I just can’t finish it.

this author and reader are awesome. they hold interest and Intrigue the mind can't wait to get to the next one and then go back and start over

this was an excellent follow-up to the first book. it was very jarring at first, though, with the switch to a first person narration from Savid's POV. This was especially pronounced since I re-listened to book 1 just before starting.

A second book that does honor to the first!

Conroe most certainly did not disappoint this happy fan. In true Conroe fashion, book two draws one inexorably further into his newest (and certainly most ambitiously Crafted to date) world. The characters make you love them, root for them, and cheer their successes; well, except the bad guys, of course, those we all get to delight in loathing!

You know that feeling where, as the reader (and/or listener), one gets extremely annoyed by supposedly super intelligent characters making uncharacteristically dumb mistakes simply to lazily advance the plot? Yeah, this book (along with his other works) completely LACKS that form of disappointment! For the listeners (and if you aren’t one, you should be, even if you read along with the audio, as I do): James Patrick Cronin, ever the wonderful narrator, pushes himself to new heights right along with Conroe in this series! Unlike many reviewers, I do try not to use even mild spoilers whenever it’s possible not to. So, I’ll wrap up with a few of the questions bouncing around in my mind.
What will become of this fledgling world, all ready once reborn from the ashes of the follies of its ancestors? How will the nations (all of which are developing wonderfully intricate stories, with unique agendas and motivations all their own) interact next? Will true open war come again, and if so, how will proscribed technology and Tainted Crafting factor into it? The Paul’s Sylvania has clearly shown itself to be the most visual enemy—get back Dr. Frankenstein—with its decisively evil, merciless warping of the natural world; but, as book two firmly establishes, Sylvania is not by any means the only threat. Within the whirling miasma of issues, will Savid’s ultimate commander forego mere realpolitik and turn to the deepest darkness of sociopathy? So many questions! I truly can not wait to find out some of the answers in book 3! Happy reading, dears.

Man I love this series so much. The characters are awesome and I can't wait until the next book

Couldn’t finish this one.
Loved his first series but just could not get into this world.