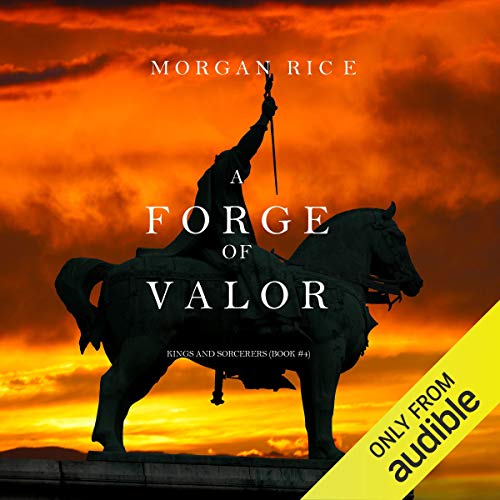 A Forge of Valor

Written by: Morgan Rice
Narrated by: Wayne Farrell
Try for $0.00

A Forge of Valor is book four in Morgan Rice's best-selling epic fantasy series, Kings And Sorcerers, which begins with Rise of the Dragons.

In A Forge of Valor, Kyra slowly returns from the verge of death, healed by Kyle's love and mysterious power. As he sacrifices for her, she regains her strength - yet not without a price. She presses Alva for the secret of her lineage, and he finally reveals all about her mother. Given a chance to quest to the source of her power, Kyra must make a crucial choice: whether to complete her training or journey to help her father, who wallows in the capital dungeon, his execution pending.

Aidan, with Motley at his side, also strives to rescue his father, trapped in the perilous capital, while in the far corner of the kingdom, Merk, amazed by what he discovers in the Tower of Ur, braces himself against a massive troll invasion. His tower surrounded, he must fight alongside his fellow watchers to defend his nation's most precious relic.

What listeners say about A Forge of Valor

Absolutely one of the most gripping Audiobooks, makes the miles fly by, you cant not listen to them all!!

I need to finish this series, but that Kyra character is riding on my nerves..

The whole book seems stretched out, predictable, and there's always some new (read: old) monster, some "new" decision that has to be made, plot twists that have no impact on the whole story, except stretching it out that it just hurts your soul.

Oh, and I almost forgot that OVERLY USED sentence ".. And in that moment she/he knew she/he would not survive."

Performance by Wayne Farrell is excellent.

I am thoroughly enjoying listening to this book. Can't wait to start the next one.

I have fallin in love with this series and the writings of Morgan Rice. I would highly recommend

Excellent and story that keeps you waiting for thrills

Story built over first three parts and here it takes exciting turns from every character’s perspective. Morgan Rice has definitely made this impactful with the twists and strengthening of unexpected characters. Best thing I was able to see in this book is, Morgan Rice can make you get goosebumps and cries with her story telling.


Rise of the dragon and army of dragons has put the story in thrilled situation.

Kyra: With her quench to know herself and the curiosity towards her own life and secrets, she is shown growing. She is just on the way to her teenage and the teenage qualities are shown convincingly. With she being riding Theon, it makes thrilled but the end make the secrets in locked closet.

Vasuvious: Rise of this man and cruelty towards the target is admiring. Fierce and tremendous determination has made him one of the best villains. Since the flame is gone. Interesting to see his next endeavors.

Diodra and Markov : The burning fire in Diodra and Loyal efforts by Markov has mesmerized the plot of the story. Interesting to see what happens to their determination.

Alex : Running from the war for the better cause has finally be seen by Alex. His excellence in weaponry has determined his destiny towards the bigger cause.

Eden : For me he has a wild card entry in the story. He came out of nowhere and on the verge of becoming one of the important characters in the story.

Dunkan : He was silent character in book 4. Being unchained now, interesting to look for his move towards the battle coming.

Merc : I still don’t understand his cause in the story. Since the character is built from the 3rd chapter of series hope to see some magical tasks towards the story.

The troll king died in the previous book and he comes back as a main character...no explanation. other than that good story line.

loved it great book. well read. easy to follow. 5his book is part of a good series.

Liked this book. So much action going on. Worth reading. Listened through Audible. Magic everywhere.

A Forge of Valor

If you could sum up A Forge of Valor in three words, what would they be?

We need them! Hurry up and get them on audible :) PLEASE !!!

Would you listen to A Forge of Valor again? Why?

I have and the Girl sometimes makes me stupid crazy. he was told not to go or she may die, but this knuckle head went anyway.

Kira but she has her moments.

The capture of her Love.

No just that it is killing me to wait between books. . . Morgan I love Ya but you have to hurry