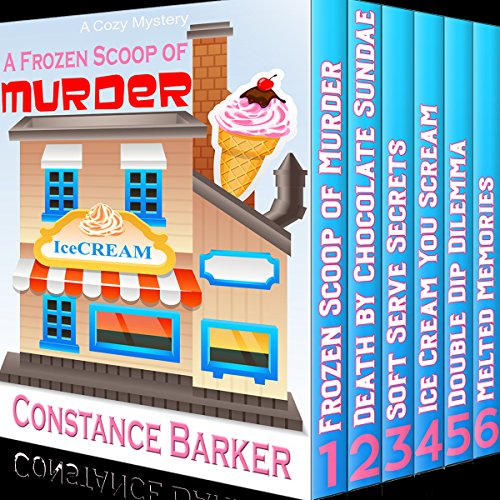 A Frozen Scoop of Murder: The Bundle Edition, Books 1-6

Murder and mayhem abound in these short stories set in the quiet town of Caesars Creek, Georgia. Join Tara, Stormi, and Paige as they attempt to solve murders and mysteries along with serving up delicious ice cream concoctions from The Frozen Scoop Shoppe.

What listeners say about A Frozen Scoop of Murder: The Bundle Edition, Books 1-6

Easy and entertaining. Did not enjoy the narration making it harder to stay engaged. Story was cute.

Would you listen to A Frozen Scoop of Murder: The Bundle Edition, Books 1-6 again? Why?

of course whoever the girls voice is stole my brain

all of it its very intriguing

with the voice of angel always

Not a true mystery

First, if you are a cozy mystery fan, this isn't really a mystery. This is more a short story where a crime is committed, the characters mull it over, and then the criminal is revealed. The stories lack any real sleuthing.

The author has a lot of opportunity to develop characters and events, but doesn't follow through. For example, the characters plan a party, but the author skips writing the scene and the reader is told the party happened.

Additionally, this starts as a "clean" read, but the language gradually deteriorates as the series progresses. While the language is mild, I like to listen with my family around, so that was a problem for me.

A Sweet Treat With A Side of Murder

This is a wholesome classic cozy, a collection of 6 "mini mysteries." They move pretty quickly but you still get a full mystery experience in each book and get to play along with the whodunit. The main characters are Tara, Stormi & Paige, and you get to know the supporting characters well throughout the books (Sam, Brandon, Trixie, etc).
You might be wondering, "how does this small town have 6 quick back to back murders? How does this series pull that off?" This was my initial question too, but alas it doesn't feel that way at all. There are 6 Books, and for example one book isnt really a murder mystery, but rather a discovery of a sketchy past of one character. Another book is a reopening of an old case, and another only has an attempted murder etc. So there is a great balance here where each Book is different and brings something different to the table. It does not feel redundant in the least.
Overall it is an easy listen, and an enjoyable one at that! If you are a fan of cozies you will enjoy this series.

* This audiobook was provided by the author, narrator, or publisher at no cost in exchange for an unbiased review courtesy of Audiobook Blast

Ahhh! Six delightful melting moments though not all of them about 'murder', but all were well written mysteries played out in a small town and involving a bunch of very good friends who of course solve the crimes.
Most enjoyable and I'm quite happy to listen/read any of Constance Barker's other books as I've enjoyed 2 different series of hers so far.
The narration was a pleasure to listen to too.
This audiobook was provided by the author, narrator, or publisher at no cost in exchange for an unbiased review courtesy of AudiobookBlast dot com.

This is a great six books. There all good and entertaining. There well written. This is in my opinion well worth a credit . You get six good books there short but really good. Angel Clark did a great job narraiting these stories. If my review was any help will you please click the helpful link. Thank you

I received this book for free, for an honest review.

This was a great series of murder mysteries. I really enjoyed how the author brought the characters and settings to life. The narrator was great was well, easy to understand.

This is sn enjoyable set of short mysteries set in small town USA. I voluntarily listened to a free copy of this and am giving an honest review. The narrator did a good job bringing it to life.

Formulaic with No Real Mystery

I received this book for free. I am voluntarily posting this review and any opinions expressed herein are my own.

Each story in this series is basically the same. The MCs sit around the ice cream shop chatting; there is no real mystery and no sleuthing. Everyone confesses.

Have read the authors other books and enjoyed. They are filled with
mayhem and murder. Along with quirky friends and neighbors. Enjoyable and the narration added to the humor in these stories.
Given audio for my voluntary review and my honest opinion

A Frozen Scoop of Murder: The Bundle Edition, Books 1-6 by Candace Barker is a bundle set of six mystery stories set at the Frozen Scoop Ice Cream Shoppe.

In A Frozen Scoop of Murder, Tara, newly divorced, has had her own ice cream shop for three months now, with her best friend, Stormy, as her chief employee and good friend Paige as an assistant during rush times. One of Tara's best customers is the mean and surly Greta Hagglemere, who prides herself on being the best at everything, especially the pie contests and rose competitions at the Spring Festival in Caesar's Creek, Georgia. At the festival this year, Greta, furious at not having won the rose competition this year, takes a big whiff of her roses and falls over with anaphylactic shock from her well-publicized nut allergy. And her epipen has disappeared, leaving her to die. Someone has killed her.

Death by Chocolate Sundae takes place during a particularly hot period during the Georgia summer. The ice cream shop ladies discuss local events, in particular the way a mean resident, Mr. Jenkins, is suing a family hardware store to put them out of business. Then Mr. Jenkins comes into their shop just as they are about to close and orders a chocolate sundae. As the ladies clean up, Tara turns around to see Mr. Jenkins's face in his ice cream. They call 911 and try to perform CPR, but that is worthless, for Mr. Jenkins has been poisoned.

In Soft Serve Secrets, the twice-widowed sweetest lady in town, Trixie, who recently eloped to marry Ben Flores, has to call an ambulance because Ben has fainted and hit his head. Ben's daughter, Grace, comes to town and accuses Trixie of trying to kill her new husband. Grace digs up information about the death of Trixie's first husband and accuses her of murder.

Ice Cream, You Scream deals with a 40-year-old murder. Paige's husband, Bruce, rents a long-vacant office space next to the Frozen Scoop in order to stay closer to home in his business. As the friends investigate the office, they find a filthy but well-behaved Westie dog whom Tara adopts after he gets cleaned up and shown not to have tags or a microchip. Winchester joins the friends as they clean the office and manages to find a special chew toy. Unfortunately, that chew toy is the skeleton of a human hand. Brandon, the brother of Stormy who works as a handyman and is checking out the wiring, finds the rest of the skeleton that had been walled up in the office. The police soon figure out that the skeleton belongs to Clifford Ewing, a lawyer who had owned the office but disappeared 40 years earlier. Thus the friends get involved in a cold case murder.

As Double Dip Dilemma opens, the friends have begun to open the shop when they hear a loud car crash. Running outside, they find a car slammed into a parked car and the driver, Sandra Morgan, very dazed, saying her brakes failed. They learn that Mrs. Morgan is the step-mother of Jeremy Morgan, the best friend of Colton, the boyfriend of Paige's 16-year-old daughter, Samantha. Colton, a computer whiz, has helped out the ice cream shop in the past and shows real integrity and responsibility. Thus, the friends express concern when Colton explains that Sandra really hates Jeremy, trying to get his father to make him move to New York, where Jeremy's mother now lives. So with suspicion that someone has tampered with the car's brakes, Colton fears that Sandra is going to push hard to get Jeremy arrested for this crime.

In Melted Memories, Trixie has decided to look up the son she put up for adoption 40 years earlier right after losing her husband, who suffered from untreated bipolar disorder. This leads her to confront her past.

The six pieces in this book are more like novellas than books, with six fitting into eight hours, 17 minutes. Novellas can be terrific if written well and tightly, but the problem with these is that especially in the earlier novellas, they don't provide a lot of clues toward the solutions. The first book is especially light in details and pops up a surprise solution that no one would have a chance to guess. This breaks the generally accepted rules of writing mysteries. Thus I do feel that the books would really be assisted by better mystery plots. In addition, Barker seems to have a particular love of foretelling as a plot device, which takes away from the mystery even more. The characters in the book have fun life situations, with development of them over the course of the books, and I appreciate that. As it is, we see the characters in the midst of their lives when suddenly the solution to the murders pops up. However, I do like the way the characters do develop over the course of the books and move from flat, stock characters to rounder ones.

The bundle is narrated by Angel Clark. She is a good reader and has a nice voice, but I don't feel that this set is suited for her. The books take place in Georgia, where the people contain strong Southern accents. However, the only character with a Southern accent is Stormy, and I suspect that it is not really Georgian either. Many of the characters did not grow up in Caesar's Creek without our knowing exactly where they each did grow up, but we do know that Stormy and Tara have been best friends since childhood, so they should have similar accents. In addition, I did begin to get annoyed by the way Clark says that the dog gives a &quot;wolf&quot; instead of a &quot;woof.&quot; The first time she said this it didn't bother me, but as she kept it up, with Winchester &quot;wolfing&quot; numerous times, it got irritating. However, these issues aside, Clark serves as a good reader who just needs to learn a bit more consistency in matching the character voices to the details in the text.

In general, A Frozen Scoop of Murder: The Bundle Edition, Books 1-6 is a fun, light-hearted series of books. It's not for the serious mystery fan but for a day when the reader just feels like a bit of fluff. I give the bundle three stars.