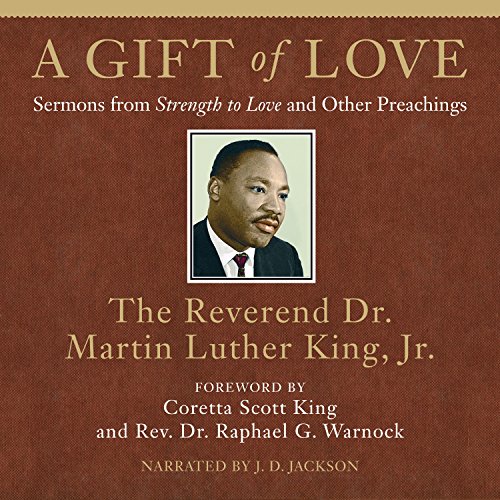 A Gift of Love

A Gift of Love

The classic collection of 16 sermons preached and compiled by Dr. King

As Dr. King prepared for the Birmingham campaign in early 1963, he drafted the final sermons for Strength to Love, a volume of his best-known homilies. King had begun working on the sermons during a fortnight in jail in July 1962. Having been arrested for holding a prayer vigil outside Albany City Hall, King and Ralph Abernathy shared a jail cell for 15 days that was, according to King, ''dirty, filthy, and ill-equipped'' and "the worse I have ever seen." While behind bars, he spent uninterrupted time preparing the drafts for classic sermons such as "Loving Your Enemies", "Love in Action", and "Shattered Dreams", and continued to work on the volume after his release.

A Gift of Love includes these classic sermons, along with two new preachings. Collectively they present King's fusion of Christian teachings and social consciousness, and promote his prescient vision of love as a social and political force for change.

A Must Read/Listen for All

One of the most profound and timely books I’ve listened to. The narrator did an excellent job bringing the words and thoughts of one of the most godly and greatest men of our time to life. Thank you to all who worked to bring these works of Dr. Martin Luther King, Jr. to us today! May we all strive to live life as he did!