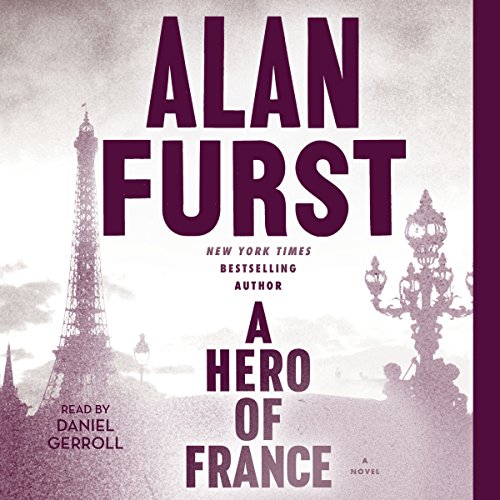 A Hero of France

Written by: Alan Furst
Narrated by: Daniel Gerroll
Try for $0.00

Alan Furst's latest novel takes place in the secret hotels, nightclubs, and cafes of occupied Paris and the villages of France during the spring of 1941, when Britain was losing the war. Many of the characters are resistance fighters who run an escape line for British airmen down to Spain; they include men and women, old and young, all strong - an aristocrat, a Jewish teacher - and the hero is a hero, has a gun, and uses it. Some of Furst's former characters - including S. Kolb, the spy; and Max de Lyon, former arms dealer, now a nightclub owner - return.

A Hero of France is sure to please existing Furst fans and attract new ones.

What listeners say about A Hero of France

My Audible library contains every Alan Furst book. This is the weakest. If you're new to Furst, start with The Polish Officer.

A tepid, contrived and boring work. I was a great fan of Furst's early books. Not again.

Good, not great. The books of Furst that I'm familiar with all deal with pre-war years and, while I liked them, after a few, I found they started sounding the same. I couldn't distinguish them. This book deals with the war, specifically the French resistance. It is fairly short, but in that time, Furst has solid characters and gives an interesting view of how the resistance operated.

Decent Insight into Life in Occupied France but...

This is more or less a micro tale or abridged presentation of how the French resistance came to be and existed during the Nazi occupation of France. I expected it to include a lot about the destruction and disruption caused by the resistance, but that was very minimal.

The reader was excellent and his work with the sexy parts was fabulous. The author's handling of the sexy stuff was really good. We don't need details when our imagination is stimulated.

My viewpoint of the story comes from my travels and my reading. I have vacationed in France for over 100 nights on several trips since 1996 (mostly in Paris) and have represented French businesses for 15 years. I recently read a few excellent books that dealt with occupied France including "The Nightingale" by Kristen Hannah (fiction), "When Paris Went Dark" by Ronald C. Rosbottom (nonfiction), “Between Silk and Cyanide: A Codemaker's War, 1941-1945” by Leo Marks (nonfiction).

What was really freaky for me was that in " A Hero of France" much of it takes place exactly where we have stayed may times. That would be the current Artus hotel, formerly the Buci Latin on Rue de Buci, just across from the Mabillon metro and about a block from the St. Germain des Pres church and metro. The book refers to the shops and stalls on that small street. Then there is the Rue Dauphine which intersects de Buci and where the hero lives in a hotel. That hotel is likely one of the hotels that exists today and I suspect the one where one can go for live jazz and nice adult beverages. Also, there is a scene in the book which reminds me of the famous French female couple Gertrude Stein and Alice B. Toklas. Though I don't recall the reference in the book, in real life, they lived in an apartment on Rue Christine which is a short street intersecting Rue Dauphine and would have been no more than a 3 minute walk from the hotel where the hero lived.

I think that with all of the recent horrors in France, the book serves to help people further understand the French in sort of an odd way.

I feel like the book would have had more impact if it included a good amount of references to some of the damage the resistance did to the occupiers. I'm not suggesting detailed descriptions of trains being derailed or factories bombed or Nazi's killed. If mention was made to these things having happened I think that would have strengthened the impact of the story. Of course, the goal of the part of the resistance that the book focused on was to rescue allied airmen.

As I finish this, I'm considering changing our December Cabo trip to return to Paris.

Typical Furst + the history of France

I lived in France for about 10 years in the late 60's and 70's and I am hungry for books that combine a feel for the country for the history. There haven't been many books or much fiction abut the resistance that I've stumbled on - and I really appreciated this story on multiple levels. Well written, well narrated - all together very very good.

"Patriotism is when love of your own people comes first; nationalism, when hate for people other than your own comes first."
-- Charles de Gaulle

I've been reading/listening to Furst novels for years. 'A Hero of France' is #14 in Furst's 'Night Soldiers' series. 'A Hero of France' is basically the tale of a small cell of French Resistance fighters in Paris, France and the French countryside who operate to return downed RAF pilots back to England to continue their work in the war. This book takes place through the early stage of Barbarossa, just as Nazi Germany invades Russia and ends right around the time the Gestapo enter France to combat the rising activities of the French Resistance.

I view the whole series as a giant canvas that allows Furst to paint the struggles and quiet heroism of those who battled Fascism in a variety of minor and major ways. These aren't books too concerned with the battles of WWII. These look at how villages, villagers, citizens, and spies in the Balkans, France, Eastern Europe, etc., fought against the rising tide of Fascism.

I've read ALL of his 'Night Soldiers' series. I only say that because lately, I've been reading these novels with some trepidation. It isn't that they aren't good anymore. 'A Hero of France' is just fine. It has interesting characters, fantastic details, a clean story. But the last three of his novels, this one included just seem average (OK, so perhaps they are barely fine). They all feel a bit phoned-in. I remember I started Furst with book 12 (Mission to Paris), and felt a bit let down too. Perhaps, it all goes back to Furst getting a bit lazy with his Paris books. I don't know. All I can say is I wasn't thrilled with this one.

Would you listen to A Hero of France again? Why?

learned so much about France during the German occupation

Yes, the scenarios of the escape routes were riveting

The reader was excellent....voices & accents as well

I love Alan Furst and his elegant writing, but this time the book is truly subpar in the context of the excellent books he has written on the subject (second WW). The plot lacks direction and strength , the dialogues are mostly eventless and at no point in time the reader feels hocked in .
Daniel Gerroll performance does not help and i was left with a feeling of elegant bore...

Mr. Furst is in a terrible bind. He is one of the best writers never to have a movie made, as far as I know. His last couple of books show an effort to convince the moguls with coy sex and happy endings. If you want to see rainy cobblestones and smell wet wool overcoats and the sweet steam of locomotives, and live with the complicated darkness of the late thirties, read his first books and send him a few bucks.

Breezy Furst, a short form of all we know well

Alan Furst immerses you in wartime France, this time even better than all the others. No one knows better how to set a scene. This who complain that the story is short on plot forget that this is a quality of all his books. In this short book, he must get to the action, what passes for it, quickly. The result is somewhat more realistic, but on the whole a bit too upbeat. Almost everyone survives this ersatz Resistance, especially the sympathetic characters. I would have been disappointed if they had not, preferring Casablanca-lite to reality. But the confection shows.

Would you be willing to try another book from Alan Furst? Why or why not?

I have read many Furst books and I hope he keeps going a long time.

The final scene in 1941, adding a touch of mystery, brought true life to the story.

Was A Hero of France worth the listening time?

The narrator did a fine job, but I still prefer George Guidall.

Good book, even if it bordered on being a short story. I like the Furst books that get their characters beyond Paris, into Germany, at least. But of course, the Fraech Resistance had to stay in France.