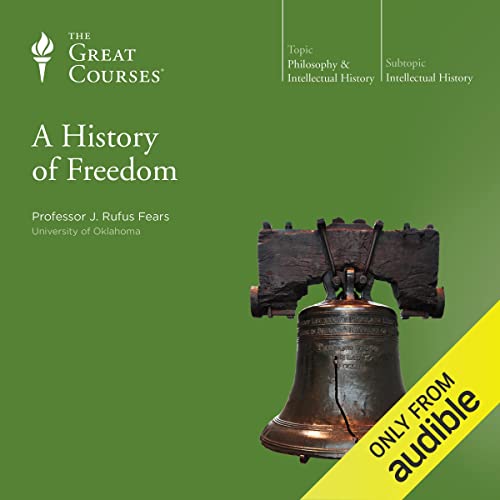 A History of Freedom

It can be argued that one simple idea - the concept of freedom - has been the driving force of Western civilization and may be the most influential intellectual force the world has ever known. But what is freedom, exactly? These 36 engaging lectures tell the dramatic story of freedom from ancient Greece to our own day, exploring a concept so close to us we may never have considered it with the thoroughness it deserves.

In exploring what freedom meant to Abraham Lincoln, Robert E. Lee, Franklin Roosevelt, Winston Churchill, Martin Luther King, and other great historical figures, you'll probe a range of provocative issues related to a concept we in the 21st century sometimes take for granted. What does it take to be free, to have and to hold liberty? What role do the liberal arts and the world of the intellect play in the life of a free society or a free individual? How should we understand the relationship among freedom, religion, and morality?

With Professor Fears guiding and informing your thinking, you explore the birth of the idea of freedom in Greece and the story of the world's first democracy; the status and meaning of freedom in both the Roman Republic and the Empire; the role of Christianity in that flowering of freedom, and the Christian view of the true meaning of human liberation; the debates about freedom that informed the framing and ratification of the United States Constitution; its awful testing on the battlefields of the Civil War; the struggles of free peoples against domestic injustices and foreign dictatorships during the 20th century; and the questions about freedom we still face today.

What listeners say about A History of Freedom

They can never take our freedom!

Professor Fears never disappoints his listener. I'm sad to find out he passed away but what a catalog of great lectures! Thank you, Professor Fears

This should be a required course for all American Citzens. Understand your roots.
Professor Fears is one of the best college orators I have ever heard.
The lectures are concise and to the point and Professor Fears is great at tying them together so the whole course flows from one lecture to the next.

I suggest first listening to Famous Romans and Famous Greeks as a foundation for this wonderful course, although it would be beneficial even without them.

I love Prof. Fears. His good-humored, unique style of storytelling combined with his vast knowledge and wise insights keep me coming back for more. This course was certainly thought-provoking; don't expect it to be an affirmation of everything you already think. And be aware that you'll be left with a sense of responsibility for the future of freedom.

I enjoyed Professor Fears's lectures in this set. Fears was an accomplished scholar but he was also an engaging lecturer and gifted storyteller. He was primarily a classicist. He was chair of the classics department at Boston University, and later held a chair in the history of liberty at the University of Oklahoma. He was also editor of some of the collected works of John Acton. In this course Fears taught that history is not the result of anonymous social and economic forces, but rather is driven by courageous men and women who lead. His examples include Socrates, Pericles, Alexander the Great, Julius Caesar, Augustus, Jesus, Martin Luther, and moderns including Abraham Lincoln and Winston Churchill. This is a long course that requires a significant investment of time and attention but I do not regret taking this course.

Fascinating history of ideas and the people who best represented them. Explains so much about how we are today. Highly recommended.

I strongly disagree with Professor Fears’ interpretation of freedom; however, that is a minor issue. The major problem is in his condescending attitude towards opposing opinions. There were several points in the lectures where Professor Fears dismisses other viewpoints and interpretations without presenting any argument against them other than his own authority. I think this is a characteristic of Professor Fears as I have seen hints of it in another of his lecture series (The World Was Never the Same: Events That Changed History). I find this attitude extremely off putting and, as such, find Professor Fears hard to lesson to. I find it rather ironic that a lecture series on freedom is being presented by a man who comes across as authoritarian.

A World Class Course in Freedom

This should be a compulsory course for every high school student in the US!!! It is such a shame Dr Fears is no longer with us. I would have loved to discuss the history of freedom over some adult beverages.

The avuncular Dr. Fears is always entertaining. I wish I had him as a professor. All of the reviews complaining that this course is "too American-centered" or something like that are wrong. How can one trace the history of freedom and not rely heavily on the United States? That Dr. Fears doesn't hate his own country or look for things to "trouble" him will trouble some folks, but if you want to hear a sensible overview of the subject, this is a good place to begin. Like many people, I have begin listening to some of these Great Courses but lost interest as they proceeded. I likested to all 36 lectures of this one.

Whenever I listen to lectures by Rufus J. Fears, I get a sense of 'enlightened excitement'. There are patterns, connections, hope and wisdom. He's one of my absolute, absolute favorite authors. He manages to bring the past world of ideas come alive, and find their connections with our world here today. Their influence is made visible and tangible, and they shed light on why things are the way they are, and how they could be different, and also, what we have lost.

This collection is no exception.

I wish they could be dramatized for children, and yes, played everywhere for everyone to take part of. To see ourselves in the light of history. Especially today, with the crumbling of the American political system, where looking out for the best for the nation, reasoning and looking for the best solutions with a common goal of providing freedom for the individual (with all that that implies) seems to have been lost in power-struggles. Both sides guilty. It's a shame. The lectures on the Roman Empire, Caesar, and Augustus are highly enlightening.

Very good book with few dogmatic opinions against Egyptian and Persian cultures.
The professor believes extremely about western culture only

A remarkable journey through history

Professor Fears has a particular style to his teaching. if may be divisive but it is interesting and attention grabbing. He tells the story of freedom with enthusiasm. it is well worth the listen, it is a refreshing discourse.