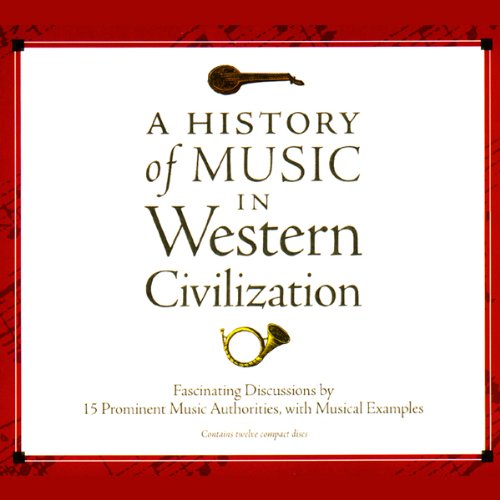 A History of Music in Western Civilization

From anonymous 10th-century troubadours to world-renowned 20th-century composers, this comprehensive commentary explores the roots of the most influential music genres of our time. Essential listening for students and lovers of great music, A History of Music in Western Civilization features music performed by world-renowned orchestras and enlightening discussions by 15 prominent music authorities, including Christopher Hogwood, Dr. Wilfrid Mellers, and others.
©1991 Sussex Publications Limited, U.K. (P)1991 A-FM Recordings, U.S.A

I enjoyed this book and felt the earlier reviews were unfair. If you expect to learn everything there is to know about music history in 10 hours, then your expectations are too high. This is a good starting point if you don't know much about classical music, or it can be a refresher if you are like me and have studied the subject in the past.

The book gives you the framework and the music recommendations to expand your knowledge. To learn more, you'll want to spend time exploring the music that is referenced.

If they had called it "Music Appreciation" and not claimed to cover "Western Civilization", I would not have bought it, but it would have been honest. Listen to the section on Renaiscance music and then the jump to Baroque-- you hear an incredible change in tonality, instrumentation, and style, yet no one bothers to explain how this happened. If you cannot explain transitions as blatant as that, you are not writing history.

Furthermore, until reaching the 20th century, apparently the only music that existed was the classical form. There is no mention of folk music except when a composer condescends to use a folk theme in his "serious" music. I don't think interviews with conductors are the best way to convey history...

In spite of my low rating, I did enjoy this very much. I came away from it feeling my understanding of music history deepened and brought up-to-date (I took the subject as an undergraduate 40 years ago). Its problem was a lack of coherence: each sections was given to a different music historian and presented in the form of a conversation. A narration, polished and considered, would have made a better audiobook.