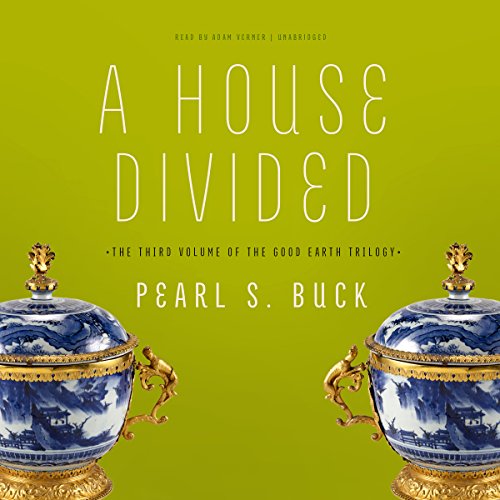 The conclusion to Buck's celebrated Good Earth trilogy: the story of a man's return to a homeland embroiled in revolution.

On the eve of a popular rebellion, the Chinese government starts to crack down in cities across the country. Fleeing the turmoil, Wang Yuan, the son of a famous general and grandson of the patriarch of The Good Earth, leaves for America to study agriculture. When he returns to China six years later, he encounters a nation still in the grip of violent uprisings. Unprepared for the social upheaval, Wang is torn by the tensions between old traditions and new ways and by his formidable family, whose struggles he hopes to solve.

A reflective finale to Buck's groundbreaking and best-selling trilogy, A House Divided is a rich and unforgettable portrait of a family - and a nation - in transition.

What listeners say about A House Divided

the son the power

great story that follows generation in China. The role and duty towards a parent is clearly highlighted and the reason for wanting a son is clearly visible good and bad.

A coming of age story

This story felt a little bland, but that might have been partly due to the narrator, who I also didn't enjoy for the recording of Sons. The parts of the story I did like: the internal conflict within the sweet, niave main character (Yuen) as he grew up from older teenager to young adult paralleled with the conflict of China going through the rebellion years. Yuen feeling like an angsty outsider, no matter where he is, until he starts to finally mature at the end and we the author hints at him finding himself and some much needed friendship.

Ms. Buck's books continue to intrigued me with everything that she doesn't document... because how can anyone simply summarize China's history into three short novels. I look forward to learning more about what inspired these novels.

So slow til the very end

A House Divided tells a more personal story than its predecessors, yet still expands the scope of the story. It continues the beautifully minimalist style of writing, and brings a perfect, satisfying end to the trilogy.

The narration by Verner is delightful and brings the story and characters to life.

It was everything I hoped it would be

The entire series was absolutely amazing. I believe everyone should read these books, they changed my outlook on the world. Beautiful stories, so full of humanity.

All one would ever need to know about life and more is in this book!

All Three Books Were Great

Just finished listening to The Good Earth Trilogy. All three books were fantastic. I found the second book perhaps better than the first, and the third better still. Each book was very distinct, tell different stories yet in a seamless way. Very easy listen.

What a fantastic way to end off the trilogy! The story led to new and exciting places; exploring politics, religion, nationalism, racism and many other topics in an enlightening way.

GREAT BOOK BY A GREAT AUTHOR.

One of the best books ever written by one of the truly great authors. Enjoy!

This trilogy is one of the surest way of understanding Chinese culture from within. Understanding here is both cognitive and emotional. History books alone can not give as deep a portrait of pre Mao China or a deeper impression. Simple and poetic in its minimalism and beauty. I do feel more able to know China from within than anytime in the past. A great reading.