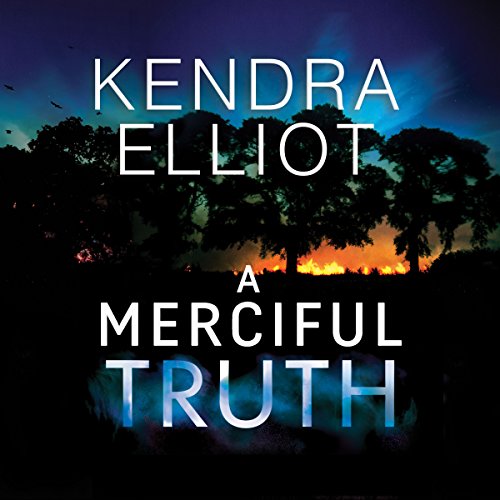 Written by: Kendra Elliot
Narrated by: Teri Schnaubelt
Try for $0.00

Raised by a family of survivalists, FBI agent Mercy Kilpatrick can take on any challenge - even the hostile reception to her homecoming. But she’s not the only one causing chaos in the rural community of Eagle’s Nest, Oregon. At first believed to be teenage pranks, a series of fires takes a deadly turn with the murder of two sheriff’s deputies. Now, along with Police Chief Truman Daly, Mercy is on the hunt for an arsonist turned killer.

Still shunned by her family and members of the community, Mercy must keep her ear close to the ground to pick up any leads. And it’s not long before she hears rumors of the area’s growing antigovernment militia movement. If the arsonist is among their ranks, Mercy is determined to smoke the culprit out. But when her investigation uncovers a shocking secret, will this hunt for a madman turn into her own trial by fire?

What listeners say about A Merciful Truth

Too much love story waters down slow clocking. This is a book listen to as background on window washing day

I know there are more books in this series, but not on audio books, . I sincerely hope that is gonna change. I like this series, and would love to be able to know what's next.

I like the characters and the story. The characters are not particularly complex. However the simplicity makes for an enjoyable, light read that sustained my interest. I'm looking forward to book 3 in the series.

I can't wait until January of 2018 for book #3 in this Mercy Kilpatrick series. Kendra Elliot does a great job of writing these books. And Teri Schnaubelt does an awesome narration. I would highly recommend this series.

MUCH BETTER THAN THE 1ST BOOK!

The first book was dull as crap! Hardly any action, too much talking, and the characters doing rediculously OBVIOUS stupid things!

I'm surprised I even gave the second book a chance after book 1!

P.S. The narrator for both books does an excellent job though!
I give her narration 5 stars, for both books! She's a great narrator! :D

I look forward to her books and especially this series and hearing about the NW.

Love these books and can't wait for #3! The reader has a very calming voice... Thank you for what you do!

couldn't wait to get through each chapter. It was very exciting. Looking forward to the next

A Merciful Truth --Each Successive Book is BETTER!

Mercy Kilpatrick, FBI Agent, has recently returned to her hometown finding family unchanged in the years since her decision to escape . This adventure brings us to return to town of Mercy's childhood. We experience murders, multiple arson, anti-government extremists, family at odds, Mercy's blind sister ( who has been raped yet will be keeping her baby, much to the chagrin of most of her family members), and an unforgettable ending. The Oregon country setting is perfect with the small towns surrounded by open country dotted by family ranches.
I highly recommend this outstanding book.
Our voice actor is awesome, she adds so much that I'll be looking for more books read by Teri Schnaubelt!

This time Mercy is working to find the serial arsonist and working on reconciliation with her family. Good story and worth the listen.