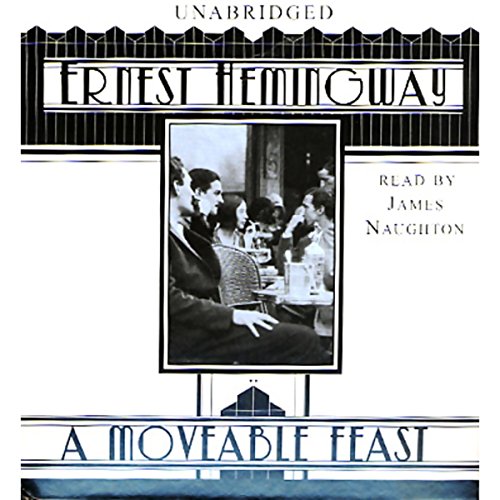 Written by: Ernest Hemingway
Narrated by: James Naughton
Try for $0.00

Published posthumously in 1964, A Moveable Feast remains one of Ernest Hemingway's most beloved works. It is his classic memoir of Paris in the 1920s, filled with irreverent portraits of other expatriate luminaries such as F. Scott Fitzgerald and Gertrude Stein; tender memories of his first wife, Hadley; and insightful recollections of his own early experiments with his craft. It is a literary feast, brilliantly evoking the exuberant mood of Paris after World War I and the youthful spirit, unbridled creativity, and unquenchable enthusiasm that Hemingway himself epitomized.
©1964 Ernest Hemingway Ltd. Copyright renewed 1992 John H. Hemingway, Patrick Hemingway, and Gregory Hemingway. All rights reserved. (P)2006 Simon & Schuster Inc. All rights reserved.
Historical Art & Literature Classics Literature & Fiction
Show more Show less

"Hemingway beautifully captures the fragile magic of a special time and place, and he manages to be nostalgic without hitting any false notes of sentimentality." (Amazon.com)

What listeners say about A Moveable Feast

Hemingway without being TOO Hemingway

I honestly didn't read any Hemingway until 20 year after I learned who he was (and that was mostly because of his super-model offspring). But after "Farewell to Arms" I quickly realized how this man drop-kicked a whole new level of intensity into literature.

But this work is nothing like the gut wrenching drama in "For Whom the Bell Tolls" or "The Son also Rises". This collection of memoirs reads more like short stories, and the short stories are even more fascinating because they're based on real people and events. Hemingway's view of the world is still pretty macho - but he's also struggling with money and not sure if he'll ever be a success at this point. He's also not sure if having to rub shoulders with these other soon to be iconoclastic characters is worth his while either. The frank and irreverant observations are even more fun considering our current celebrity obsessed culture.

So if you've thought Hemingway was too heavy for your taste, you still may really enjoy this book. If you enjoy reading first hand accounts of important literary figures, you'll love this book. And if you ever plan to go to Paris, you must hear this book!

It is the Feast of Life!

I was surprised when read few negative comments here. It looks like some readers were expecting detailed sex scenes while others were irritated by mentioning drinks often.

I value Papa Hem for his enormous ability to enjoy and capture the life "as is" without unnecessary exaggerations and extremes that some expect from literature (probably due their own boring life experience where nothing real happens).

In my view he's a teacher who helps us to appreciate life and be happy with its simple artifacts like eating, drinking and loving. He had an extraordinary talent to bring the artistic fragrance of Paris' of 20-th to everybody's life by few simple words that everyone could understand.

He is a phenomena that had never happened in the US or world's literature before and that will probably never happen again. I am so sorry for the people who can not see the great feelings and aroma of the real life behind his simple (not to be confused with primitive) straight-forward writing.

Narrator is just as great as the novel: it's like the author reads it himself.

The Cure for Writer's Block

I had writer's block for a couple of months. (Well, to the extent that someone whose only writings are Audible reviews, and those only for fun, is considered a writer . . .). I just couldn't get the words out. There were enthralling listens, engaging characters, and cleverly turned phrases I couldn't share. Contrived plots; stereotyped, one dimensional characters; and irritating productions were temporarily safe. Even the writer who used "sarcastic" instead of "sardonic" didn't prod me into opening up Notes on my iPhone to start a review.

I comforted myself listening to and reading and rereading my 'greats' - Zora Neale Hurston, John Steinbeck, Ray Bradbury, Raymond Chandler, Stephen King, Alice Walker. Any critic who says great writers can't be genre writers and best sellers is a snob.

Finally, I found solace, direction, and a cure in Ernest Hemingway's "A Moveable Feast" (1964, written, 2006 Audible) - not that I have anything else in common with him as a writer, except that I also write in English. Hemingway had writer's block from time to time in during his memorable stay in Paris. His greats were F. Scott Fitzgerald, Gertrude Stein, and so many others - and most fascinating to me, the poet Ezra Pound. When Hemingway was stuck, he took the Metro from Gare de L'Este and visited the great expatriate writers and artists who lived in 1920's Paris, sometimes in great wealth but often in poverty so abject they didn't have the pennies necessary to use the coin operated radiators to heat an apartment.

Hemingway committed suicide in 1961, so "A Moveable Feast" was published posthumously. The stories were collected from journals he wrote in the cafés, nursing one Cafe au Lait for half a day. There were several versions, and this 2006 Audible edition must be based on the 1964 edition released by Mary Welsh Hemingway, his 4th wife. There is 2009 revised and edited version by grandson Seán Hemingway. I wasn't able to get information about what edition was read in this Audible edition, but It is copyrighted 2004 so it must be an iteration of the 1964 version. I would very much like to read/listen to the later version. Seán Hemingway is a historian and writer in his own right, and he must have an interesting edit of his grandfather's life.

WINE, WINE AND MORE WINE
An excellent look at a young writer's life before he hit the big time. Written so well that you will be taken back in time and to Paris. No story here, this is a memoir. Also a great look into the 20's and the attitudes of other writers at the time.

A Collection of the Unfinished, Unpublished ...

“By then I knew that everything good and bad left an emptiness when it stopped. But if it was bad, the emptiness filled up by itself. If it was good you could only fill it by finding something better.”
― Ernest Hemingway, A Moveable Feast

I writing this at a resort, nestled against the Catalina Mountains in Tucson, AZ. I am warm, well-fed, and happy. This book peaks for me with its perspectives on Paris post World War I (think Fitzgerald, Stein, Joyce, Pound, etc.). I struggle with its form. I am conflicted about the impulse to collect, collate, publish and monetize every note and scrap an author has scribbled.

Some parts of this book (Fitzgerald drunk and worrying about the size of his penis and Hemingway offering to take him to a museum to discuss the related topics of penis size and perspective in ancient Greek statues) was so bizarre it just rang of truth. Other pieces just seemed like Hemingway's first draft of stories using his own life as a model. It was Hemingway dough that hadn't yet risen and been cooked by the chef.

So, I go back and forth with how much I as a reader can expect or want from a dead writer. Do I really need to examine every note and sketch? Sometimes, I think it is valuable. I did enjoy reading DFW's unfinished piece (Pale King). One of my favorite of Schubert symphonies (the 8th) is CALLED the unfinished. But I also think it all feels a bit like grave robbing. Well, perhaps not grave ROBBING, but like hustling the hair, bones, and other relics of authors we now esteem as gods. There is something that smells a bit off with the whole business. But, fermentation is a part of life, death and inevitably art as well.

A short Hemingway novel told in episodic splendor. I was lusciously transported to 1920's Paris. His stories with Gertrude Stein were an eye-opener to her life as were the ones with F. Scott Fitzgerald. It was fun watching him dodge their neurosis. I didn't want this novel to end. The reader was just serviceable. He sometimes sounded too dear to read Hem.

The narrator was superb. A great listening experience.

This book lets you feel Paris even if you have not been there. It feels like youth and is a reminder of the potential we all felt and wish we had. Beautiful.

I feel like I know Ernest Hemingway now. but I know there is much more to know. and in time, I'm certain I will. I did not want this to end. I cried.

More of a diary than a work of fiction/story

If interested in seeing what Hemmingway and Fitzgerald's lives were like in Paris, this is a must read. Compared to other Hemmingway brilliant novels however, this was a bit more flat as it just felt like a diary. Completely fascinating to see into their lives, but not quite what I thought it was.

Would you recommend A Moveable Feast to your friends? Why or why not?

Yes IF you're looking about learning about the writer's life in Paris, if looking for a work like A Farewell to Arms or The Sun Also Rises, this is not that.

It was consistent and clear. It was not distracting in any way.

No, it was enjoyable, nothing extreme at all.