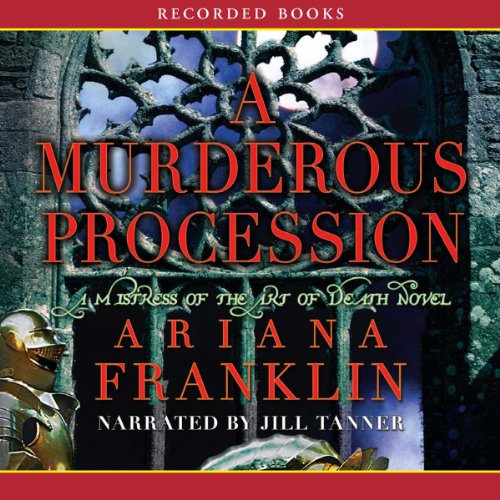 Written by: Ariana Franklin
Narrated by: Jill Tanner
Try for $0.00

National best-selling author Ariana Franklin resumes her Mistress of the Art of Death series with A Murderous Procession. In 1176, King Henry II’s daughter is set to marry the king of Sicily. But when several wedding guests are murdered during the procession, Adelia must uncover who is behind the killings and who is the killer’s real target.

What listeners say about A Murderous Procession

I enjoyed this overall, except for my frustration with the main protagonist’s unlikely stubbornness and refusal to see obvious dangers, in spite of what she had been through in the previous novels. But I decided to « suspend disbelief » to enjoy the ride.

The end of a fantastic series?

I loved all four of the "Mistress of the Art of Death" books and really can't say enough wonderful things about them all. This one was different, as others have stated, and I felt a little thrown off by the change. As for the comments on Adelia's change in focus, I felt like she had decided that she wanted her life to take a different turn than she had been following.

But these books are what I think of as "re-reads" and I'll probably listen to all of them many more times.

Unfortunately, Ariana Franklin (Diana Norman) passed away in January 2011, which makes this book even more poignant. I don't cry over books, but I have to say the end of this one really broke my heart in more ways than one.

I have listened to all four in the series so far. The first "Mistress in the Art of Death" was narrated by Rosalyn Landor. She did a wonderful job. When I saw the next two "Grave Goods" and "The Serpents Tale" had changed narrators ot one of my favorites Kate Reading. Every single narration I thought was done very well and Ariana Franklin writes a wonderful historical novel. This one "A Murderous Procession" had a new narrator Jill Tanner. I was a little skeptical at first, I did listen to the sample, and decided to purchase. I was very pleasantly surprised at how well the narration was done. I recommend all the books in the series. I know that some people get used to a certain narrator when a series is being read, and I really do understand. That is why I always try to listen to the sample Audible provides. .

The narrator almost ruined it for me. I did get used to her, but I didn't like the "Scary" voice interludes at all. I really missed Kate Reading. I did like the book -- and what Franklin is doing with this historical time period, which is coming together in my mind like never before. I can't believe how much time has been lost for women and medicine because of the suppression of the dark ages. Glad those times are gone! I also appreciate the author's historical notes.

This was possibly the weakest link in the series so far, but I still have no regrets in purchasing it. I just love these characters and the twists and turns in the plot and their lives are gripping.

I love historical novels and Ariana Franklin gives us the woman's pov of events. Not only do I get a good read but i am always learning something new. Jill Tanner is a strong reader and helps support the story. Without giving anything away, I can't wait to read the next installment.

Franklin has done her research and does a great job of embellishment. As a history buff, I enjoyed the description and annotations of everyday life in those times. The twists and turns keep you hanging on and wanting more.
Jill Tanner does a great job as a narrator of these stories. Never bringing the present into her voice or intonations.
Hoping for more!

What would have made A Murderous Procession better?

I really enjoyed each previous book in the series. Unfortunately i did not find the narrator on par with the previous two. The characters were not distinct and I had to wait for the narrator to say who said what before I could tell what was going on. Very disappointing. If I had not enjoyed the series so much I would not have purchased this one.

I did not think the narrator suited this book. The previous narrators gave a life to the characters and fleshed them out with tone, inflection and accents. I would not have purchased the book had it not been for it being the last of a great series. I found the narration took away from the experience and found that I just wanted to get through the book.

This is an awesome series!!!

The Ariana Franklin _Mistress of the Art of Death_ series is just outstanding. This one switched narrators on me, but once I got used to the new voice, I liked her just as well.

The reader makes a huge difference

I adore this series and always look forward to listening to the books. And yet this time, with the new reader, it took me longer to immerse myself in the story and get beyond the reader. She annoyed the heck out of me with the voice of Scary and I wanted to smack her and tell her that I'm not a 4yo and don't need the over dramatization. Every time the reader pronounced Adelia's friend Mansuer (sp?) I wanted for her to have listened to previous audio books so that the name was pronounced consistently. This was almost one of the books that was ruined for me simply by the reader. Ultimately however, the story won out and I was glad I finished it.

I wish Audible would put these in order, though. The first in the series is Mistress in the Art of Death. Second is The Serpent's Tale; third is Grave Goods; fourth is Murderous Procession. The books, consumed in the correct sequence, develop the main characters quite well and each story line is totally satisfying.