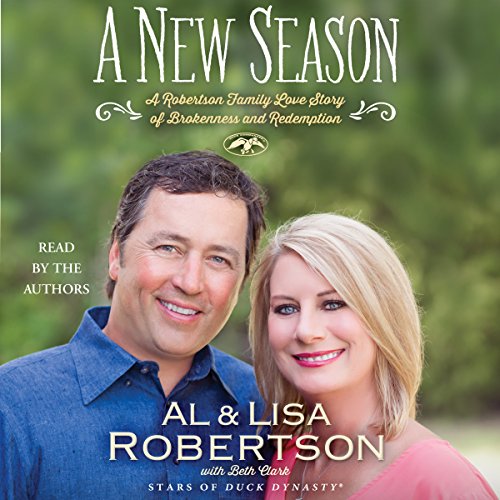 Alan and Lisa Robertson, members of America's favorite back woods family and the Duck Commander Clan, take on the topic of relationships as they share the secrets that saved their marriage.

Infidelity, deceit, distrust, and shame. Unfortunately, these are recurring themes in many of today's marriages in America - even in the family-values-promoting, Christian-based Robertson family.

With a romance that began in junior high, the couple got off to a rocky start but soon settled into married life and had two baby girls. Alan became a pastor in the church where his family had been members for years. Then, when Lisa had an affair, the heartache and the tension was very public.

But this is not a book about a marriage gone wrong. It is a candid story of rescued love and renewed commitment. After nearly getting divorced, Alan and Lisa came to terms with what went wrong in their marriage and both began the hard work of making it right. Now married for 29 years, Alan and Lisa counsel couples in trouble and speak across the country - openly sharing their hardships, their journey to renewed commitment, and a thriving marriage.

What listeners say about A New Season

The book takes an honest look at how bad a marriage can get when God is not first in your life. Thankfully with God's help, the Robertsons reconciled and now have a great marriage. The book will move you to take a good, Godly look at your own life and marriage.

My fav Robertson book so far. Probably because I related to it so much. I needed the healing & this has greatly contributed to a pivotal time for me. I loved the end, about marriage. Although Im divorced & have no desire to reenter a marriage, I do want to be a respectable & loveable person. God bless you both✝

This has blessed me tremendously!!!

Alan & Lisa provide hope to those in the midst of trying to make our marriages and lives better.

you walk away feeling very good about this Couple.

Would you consider the audio edition of A New Season to be better than the print version?

the honesty, The path toward forgivesness.

The demonstration of God's redeeming grace in all their lives.

It's a book I wanted other's to read.

Encouragement for all marriages and families.

This book offers a deep, intimate look into Al & Lisa's life, followed by a message of hope and healing that can only come from God. Whether you are enjoying a thriving marriage right now, or ready to end your marriage, they will challenge you and offer hope for the future. This is a great read/listen for all. Having read "The Women of Duck Dynasty", "A New Season" far exceeds that one in terms of depth, honesty, and real life application. Thank you, Al & Lisa.
Note: This would not be appropriate to listen to in the presence of young children.

This book will transform your thinking on marriage. If you’re walking through a difficult season in your marriage, this book will spur you on. I finished it in two days.

Thank you Al and Lisa for sharing you story with the world. You have opened my eyes on what takes to be a good husband.

An absolutely beautiful story of forgiveness, perseverance, faith, restoration, redemption, and a true "happily ever after"! I appreciate the openness and bravery from both, but primarily Lisa, to let the world see what secrets can destroy and how God can heal even the most broken!

Loved their openness and honesty

I absolutely loved this book. My husband and I are going through some similar situations and their words have given me a renewed sense of hope, not only for my marriage, but for my life.