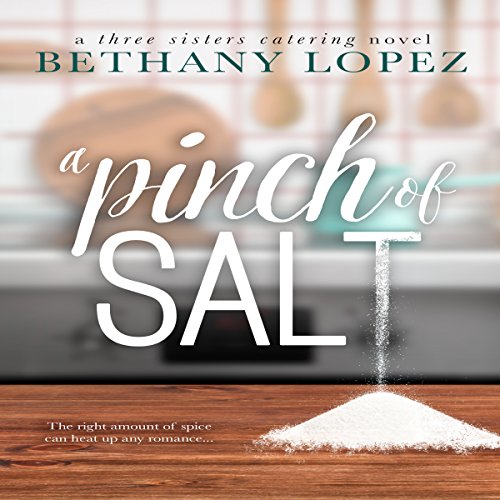 A Pinch of Salt

Written by: Bethany Lopez
Narrated by: Melanie Ewbank
Try for $0.00

For the past year, talented chef Millie has been consumed with running her new catering business with her sisters, Dru and Tasha. It isn't until Jackson walks through their door that she realizes something may be missing in the recipe of her life.

For the past year, Jackson has been dealing with the fallout of his wife's abandonment. He's had to learn how to be a single father to their eight-year-old daughter, and will do anything to fill the void her mother left. It isn't until he commissions Millie for his daughter's birthday party that he realizes he's forgotten that he's not only a father, but a man.

They both think they're content in their lives, but sometimes the right amount of spice can turn an okay dish into a magnificent one. A Pinch of Salt may be all that's needed to bring Millie and Jackson the flavor they've been missing.

What listeners say about A Pinch of Salt

A Pinch of Salt

A love story that has a few hurdles to overcome that are so realistic the author did an amazing job. Single parents definitely have it hard when trying to move on and yet take their child’s feelings into consideration as well. I loved this book and will definitely be listening to the next!

Amazing, sweet, emotional, fun story. Really enjoyed istening to it and the narration was perfect!

Bethany Lopez sweetened the pot. A Pinch of Salt, should be renamed A Dash of Sugar. Not only does she serve up some spicy romance, she gives readers a taste of a father's love. Written between the lines is a tablespoon of sage advice and all of this is delivered with a teaspoon of love. Caring can be as simple as lending a kind ear or helping out a friend or taking a chance by risking it all and opening up one's heart again. Reasonable advice hidden in a tasty little package.

Such a sweet story and apart from one or two 'sexy' scenes, a clean one. I loved Jackson & Millie. They are perfect for one another. Caring, hard working, just good all around people with clear priorities and goals.

I look forward to hearing more Millies sisters and the others in their small group of friends.

Melanie Ewbank did a great job narrating an DC portraying God characters. The emotions throughout were clearly demonstrated.

I recieved a free Audible copy of this story, at my request, in exchange for a honest review.

I was given this free review copy audiobook at my request and have voluntarily left this review. This book was exactly what I needed. I have been in a book hangover from a series I was reading and this brought me out of it. I loved Millie and Jackson. The story was so sweet. I cannot wait to read the next book. The narrator was enjoyable too!

I absolutely adored Jackson and Millie! Their slow burn was perfect and I loved their romance. A Pinch of Salt was an enjoyable story and I definitely plan on reading/listening to the next two.

I wasn't a fan of the narrator, Melanie Ewbank. She didn't differentiate between the character voices, making it really hard to keep track of who was speaking. I think the story would have benefited a lot more from either having a narrator that is able to differentiate characters for the listener, or a male narrator for Jackson.

I received a free copy for my honest review

Lovely and full of spice!

Sometimes you just need a light romance, and this one definitely delivers a sweet and fun romance.

I have sisters and totally related to the sister-bonding/relationships and enjoyed that part of the story immensely.

It was fun to see the story unfold between Jackson and Millie.

I was given a copy of this book in exchange for an unbiased review.

Loved the scene in the classroom

There were many things to like about this listen, especially the scene in the classroom. That was easily one of the most romantic passages I have ever listened to.

Millie and Jackson are a cute, mostly angst-free couple. They have a few things to figure out but their story does not get lost in the tall weeds. Thank you, Bethany Lopez, for writing such a sweet, non-over-the-top, it-could-totally-happen story!!!

I liked the narrator although there were a few times that I did not immediately know if Millie or Jackson was talking. It didn't happen enough to be annoying but it did happen a few times to be noticeable.

The story had a very fun and innovative HEA and that just added to the special.

A pinch of salt

I enjoyed this book! Lovely romance with family members making for a really good experience. Oh, and a tiny bit of Elvis added in.