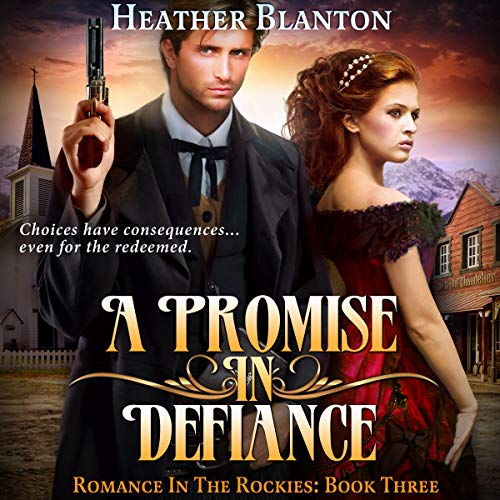 A Promise in Defiance

Written by: Heather Blanton
Narrated by: Angel Clark
Try for $0.00

When scandalous madam Delilah Goodnight flings open the doors to the newest, most decadent saloon in Defiance, two good men will be forced to face their personal demons. Charles McIntyre founded the rowdy mining town of Defiance and early on was more than happy to rule in hell rather than serve in heaven. But things have changed. Now, he has faith, a new wife...and a 10-year-old half-breed son.

Logan Tillane, Defiance’s newly arrive preacher, carries a bible in his hand, a gun on his hip, and uses both to fight for lost souls. Delilah has come to town intent on destroying both men as she drags their town to hell....

A Promise in Defiance is an old-fashioned Western reminiscent of Clint Eastwood's Unforgiven and Pale Rider! Gritty and rich with drama, this is the closing chapter to the best-selling Wild West saga of love and faith in a godless frontier town.

What listeners say about A Promise in Defiance

Other than the author being very fond of the H word, it is a clean novel and well written. This narrator however has a naturally grating voice and then chooses for several of her female characters, a high nasal whiny voice which is very difficult to listen to. Unfortunate that she made that choice because of the already grating nature to her voice

I have thoroughly enjoyed this entire series! My only complaint is the narrator of books 1 & 3.
I almost had to stop listening and buy paperback, but I had already paid for the audible books. If I had more time I would elaborate on these amazing books. Heather Blanton is an incredibly gifted writer.

Three Christian sisters, their friends and associates, continue to work for the community improvement of Defiance, CO, a rough 1870's mining town. In this actively Christian romance the characters openly discuss and seek the religious saving of characters. This was too actively Christian for me, but is very well written, plot/character appropriate and well written. Delilah Goodnight seeks to open the newest saloon and brothel, auction captured non-willing virgins into prostitution and confront the former saloon owner and the local pastor, her long lost childhood love.

When I heard in the intro that ANGEL CLARK would be narrating a WESTERN ROMANCE, I almost deleted it, because I can only picture her as the snark and sass of the LHH/AML witchy cousins or Avery Shaw or Ivy Morgan (nothing wrong with that - I think I have them all), and then the prologue started and I laughed so hard because yes, the snark and sass was all there and it totally fit this book!
All that aside, and I’m saying this with my hands on my hips in full DEFIANCE MODE, without spoiling it, I need some kind of HEA, not HNA! Just sayin!

This is the third audiobook in this series. This has been an excellent series. Three sisters move from the south to Defiance and it goes through all there lives. Each book holds your attention from start to finish. There is gambling and shootings and plenty of working girls. Saloon that is. I highly recommend this whole series. Angel Clark narriates two of the books and Elm Eldridge narriates one of them they both do a great job. Also Heather Blanton is a very talented writer. If my review was any help will you please click on the helpful link below. Thank you.

The ever brilliant Heather Blanton does it again with this heartbreaking yet inspiring story set in Defiance! The redeeming abilities of God are far reaching and never limited! The sin of man is abhorrent, but God..! The narration was very good but a few of the women (and even a man or two) seemed to whiny to me. But cadence was great and the story flowed very well!